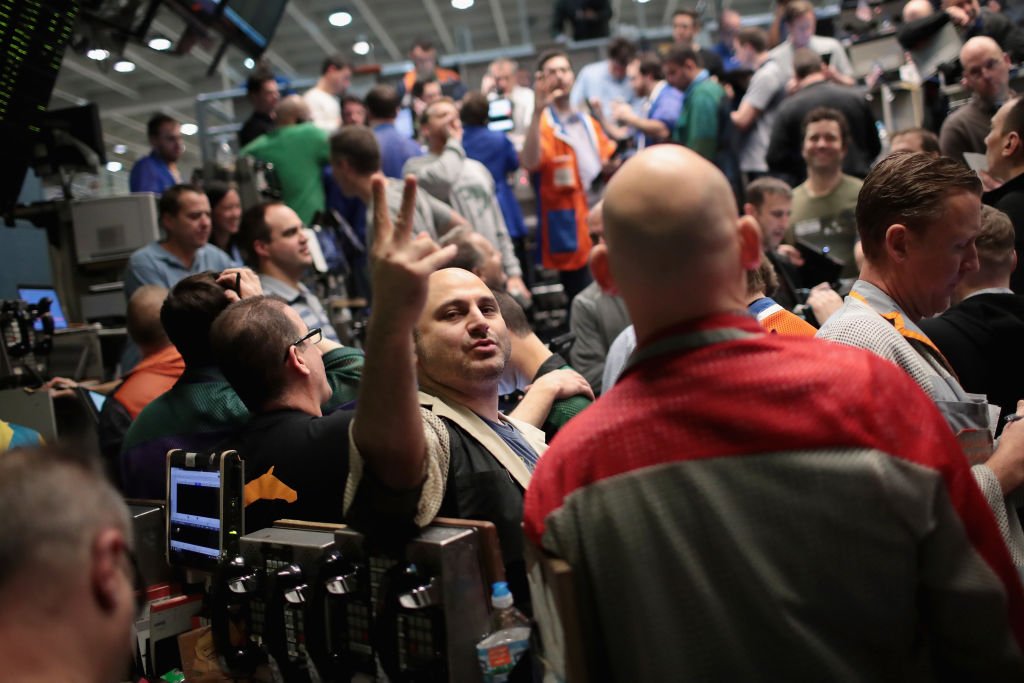 Bitcoin’s awe-inspiring debut on a major U.S. exchange caused some to worry about a bubble effect, but the cryptocurrency was trading at more than $16,000 early Monday morning giving it an 8% bump.

Given that bitcoin has almost tripled in value over the past month, and was up more than 10 percent on the day alone on Monday, the futures pricing suggests investors reckon that the eye-watering price increases seen in bitcoin in recent months could be set to slow down.

The futures contract that expires in January surged $2,730 to $18,190 Monday morning on the Chicago Board Options Exchange. Trading began Sunday, and the price rose as high as $18,850, according to data from the CBOE.

The CBOE futures don’t involve actual bitcoin. They allow investors to make bets on the future direction of bitcoin.

The first session of futures trading fit right in with the frenzy surrounding bitcoin. Traffic to the CBOE website was so heavy right after the start of trading that the site experienced outages. The exchange also halted trading twice Sunday to stem volatility. The exchange operator has rules in place to stop trading after price swings of 10 percent.

Another large futures exchange, the Chicago Mercantile Exchange, will start trading its own futures on Dec. 18 but will use a composite of several bitcoin prices across a handful of exchanges.

Futures are a type of contract in which a buyer and a seller agree on a price for a particular item to be delivered on a certain date in the future, hence the name. Futures are available for nearly every type of security but are most famously used in commodities such as wheat, soy, gold, oil, cocoa and, as dramatized in the Eddie Murphy and Dan Aykroyd movie “Trading Places,” concentrated frozen orange juice.

The futures signal greater mainstream acceptance of bitcoin but also open up bitcoin to additional market forces. The futures will allow investors to bet that bitcoin’s price will go down — a practice known as shorting — which had been very difficult to do.

There have been other attempts to bring bitcoin investing into the mainstream. Tyler and Cameron Winklevoss, twin brothers who own large amounts of bitcoin, tried to create an exchange-traded fund based on bitcoin, but federal regulators denied their application.

The digital currency has had more than its fair share of critics on Wall Street. JPMorgan Chase CEO Jamie Dimon has called bitcoin “a fraud.” Thomas Peterffy, chairman of the broker-dealer Interactive Brokers Group, expressed deep concerns about the trading of bitcoin futures last month, saying “there is no fundamental basis for valuation of Bitcoin and other cryptocurrencies, and they may assume any price from one day to the next.”

Peterffy noted that if bitcoin futures were trading at that time, under the CBOE’s rules those futures likely would experience repeated trading halts because 10 percent or 20 percent moves in bitcoin prices have not been unusual in recent months.

Bitcoin is the world’s most popular virtual currency. Such currencies are not tied to a bank or government and allow users to spend money anonymously. They are basically lines of computer code that are digitally signed each time they are traded.

A debate is raging on the merits of such currencies. Some say they serve merely to facilitate money laundering and illicit, anonymous payments. Others say they can be helpful methods of payment, such as in crisis situations where national currencies have collapsed.

Although there are hopes that the futures will draw in investors who would not previously have touched the market, most fund managers at larger asset managers and institutional investors still say bitcoin remains too volatile and lacks the fundamentals that give other assets value.

“We’ve looked at it in the past but if you look at the number of times that you need to trade to keep your exposure at the same level, after one week you need to rebalance the portfolio already,” he added.

Despite those being modest when compared with bitcoin’s recent moves – a 270 percent increase over the past three months and a 230 percent rise in the last two months – they still showed a lack of appetite from investors to take large “short” positions betting against bitcoin.

“The premiums have so far been very high, demonstrating that few want to take the short side of the trade,” said Altana Digital Currency Fund manager Alistair Milne, whose cryptocurrency fund has $35 million in assets under management.

While bitcoin’s price rise mystifies many, its origins have been the subject of much speculation.

It was set up in 2008 by an individual or group calling themselves Satoshi Nakamoto, and was the first digital currency to successfully use cryptography to keep transactions secure and hidden, making traditional financial regulation difficult if not impossible.

Central bankers and critics of the cryptocurrency have been ringing the alarm bells over the surge in the price and other risks such as whether the opaque market can be used for money laundering.

“It looks remarkably like a bubble forming to me,” the Reserve Bank of New Zealand’s Acting Governor Grant Spencer said on Sunday.

“We’ve seen them in the past. Over the centuries we’ve seen bubbles, and this appears to be a bit of a classic case.”

Somebody who invested $1,000 in bitcoin at the start of 2013 and had never sold any of it would now be sitting on around $1.2 million.

Heightened excitement ahead of the launch of the futures has given an extra kick to the cryptocurrency’s scorching run this year.

The CME Group is expected to launch its own futures contract on Dec. 17.

The launch has so far received a mixed reception from big U.S. banks and brokerages, though.

The Financial Times reported on Friday that JPMorgan Chase & Co, Citigroup Inc would not immediately clear bitcoin trades for clients.

Goldman Sachs Group Inc said on Thursday it was planning to clear such trades for certain clients.