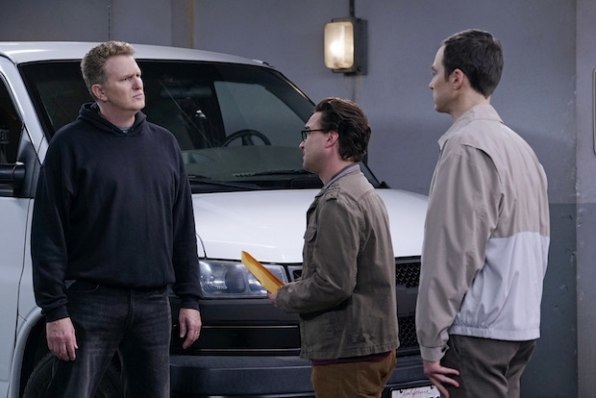 On this week’s episode of “The Big Bang Theory,” Sheldon told Leonard a Swedish team of physicists were trying to invalidate an experiment they had conducted. Sheldon said they needed to perform the experiment again. Leonard said they couldn’t do that unless they got liquid helium, which they had on back order to receive in a month. Leonard said they should check if the university had a helium reserve.

Leonard and Sheldon went to Barry and asked if the university had any. He said that there was a shortage and that what little they had he needed for his own study.

Raj told them to go to Party City for the helium, but Leonard said they’d have to go to every Party City in California to get enough. Sheldon said if the Swedish physicists performed the experiment first he would never be able to eat any Swedish food again. Howard said he knew a guy that could get them helium as long as they agreed not to ask questions.

Bernadette told Penny that Stuart had gone on a date the other night with a woman he met on a dating app. Penny said she should find out which app it was so that Amy could use it to find a date too. Stuart showed them the dating app and said it changed his life.

Leonard got an email from Howard’s guy that said he could get them helium that night. Sheldon asked where the helium was coming from and said they were violating the university’s rules by getting helium from an outside source.

Stuart, Penny and Bernadette showed the dating app to Amy and helped her place an ad on it.

Leonard and Sheldon met Howard’s guy. He asked for the cash and Sheldon asked if he was going to take the money and drive away. Sheldon told the guy to give them the helium first, but then the guy pointed out that if he did they could drive away without paying. Sheldon told the guy they couldn’t trust him because he looked sketchy, and he said the same thing about Sheldon and Leonard.

Sheldon and the man got into an argument, and Sheldon said he figured out the man’s name was Keith. He also found out where Keith lived and worked. Leonard then explained to Keith that they needed this helium for an important science experiment.

At Howard and Bernadette’s house, they connected Amy’s phone to the TV to search for a date for her on the app. They made fun of the guys on the app and Amy said they were being mean.

Sheldon and Leonard arrived at their lab with the helium tank. Sheldon then found a sticker on it that led him to believe it was stolen from the government. Leonard told him not to jump to conclusions.

While the gang was looking at the app, Amy got a text on her phone from a man named Dave. In the text he said he had had fun the night before and that he wanted to take Amy out again.

Sheldon and Leonard then met with Keith to return the helium tank and get their money back. He asked if there was something wrong with it. Leonard said there was not, but they changed their mind about it. Keith said he would take it back, but he wouldn’t give them their money back. Keith then said he had to charge them a restocking fee. Sheldon said that better not cost more than $1,000 because that’s all he had on him. Keith said that was exactly how much it would cost them.

Penny and Bernadette asked Amy why she hadn’t told them she was seeing someone, and she said it was because it was new and still weird. She said she knew they would get excited if they had found out she had been dating a few people. She also said she needed experience with dating.

They invited Keith to their apartment to watch the movie “Ernest Goes to Jail.”