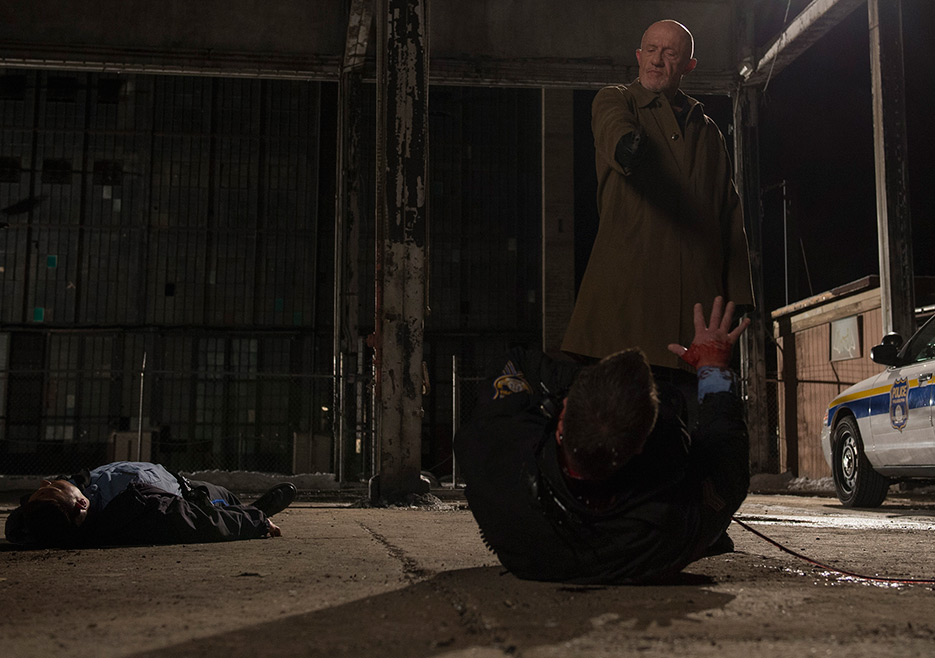 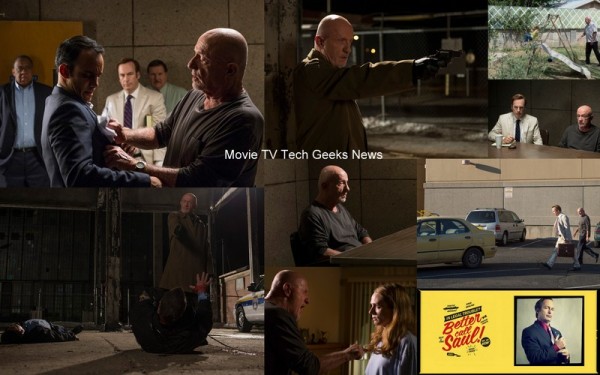 Get ready for a heavy dose of Mike Ehrmantraut. This week’s installment of Better Call Saul was slap full of the grizzled veteran cop. This is the beauty of this series. Breaking Bad had so many good characters that we only got our beaks wet with many of them. Now this spinoff is devoting lots of screen time to characters like Mike. The reason for his being in New Mexico is laid out as plain as day and it wasn’t a pretty story, but it’s one that made Mike stand out even more as a major player. 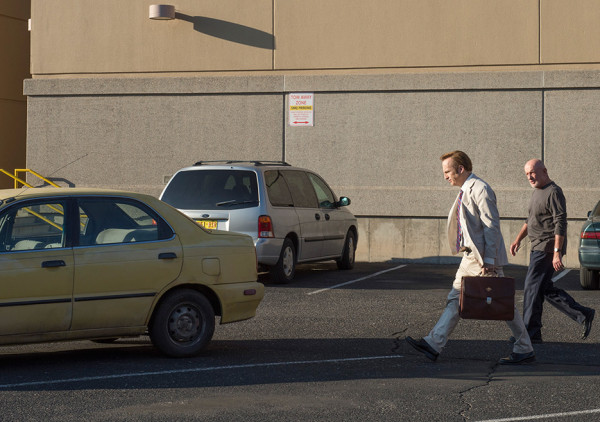 The opening scene is a flashback showing Mike arriving in New Mexico via train. Pretty fitting for his old school persona. Dude has been shot and is repairing himself in the train station restroom. His exit from Philly was a nasty one evidently. Most people don’t hop a train across the country after getting a bullet in the shoulder so foul play is obvious. Mike’s no boy scout of course. 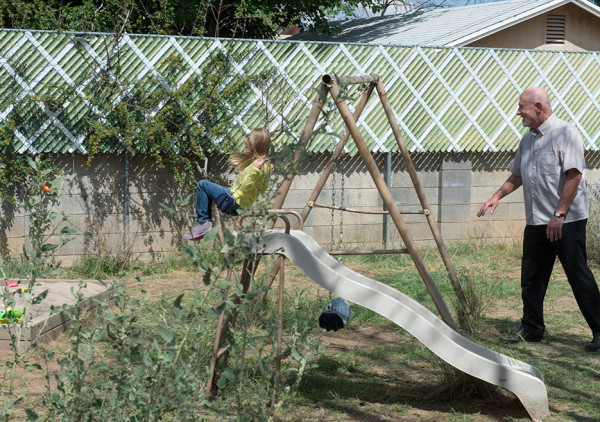 Mike visits the lady we saw last week as he waited in his car on the street after his shift ended. She is his daughter in law. Mike’s son, Mattie, was killed in Philadelphia while on the job. He, like his old man, was a police officer. Mattie’s widow wants some answers from Mike and brings up an angry phone call she overheard late one night. She asks Mike if he was on the other end of that call and he denies it. Mike’s a liar when need be.

Mike went to the old stand by for unreported gunshot wounds. That’s right, the local veterinarian. This guy didn’t have to be threatened like in most films. He was glad to take some cash for his services and silence on the matter. 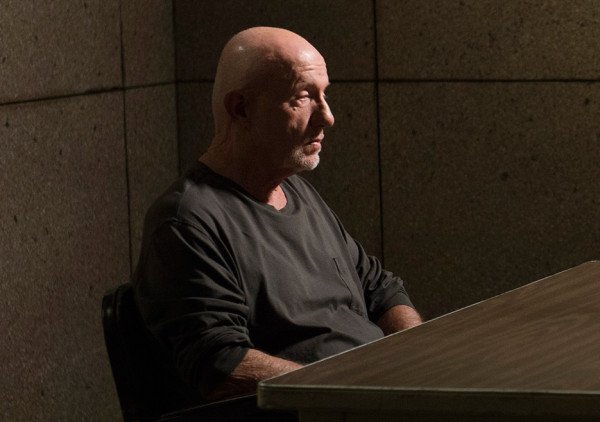 Flashing back to present day, Mike is getting grilled in the holding room by the Philly cops who knocked on his door last episode. If the answers they are searching for are hidden inside Mike’s mundane, “lawyer – lawyer – lawyer” statement, then they would have been in luck. He wants Jimmy McGill and slides the card to his interrogators. Jimmy comes strolling in “like Matlock,” according to one policeman. That’s just the look Jimmy was looking for so mark down another success for the our favorite elder law expert.

The trouble that Mike was running from when he came in on a train bleeding from a gunshot involved his son. He was killed in an ambush and to make things seem even shadier than one cop dead, two of his partners were killed as well. At this point I was leaning toward Mike being the triggerman on the later two killings in a revenge play for his son. It was apparent that the two cops were to blame for Mattie’s demise. That later turned out to be the case. 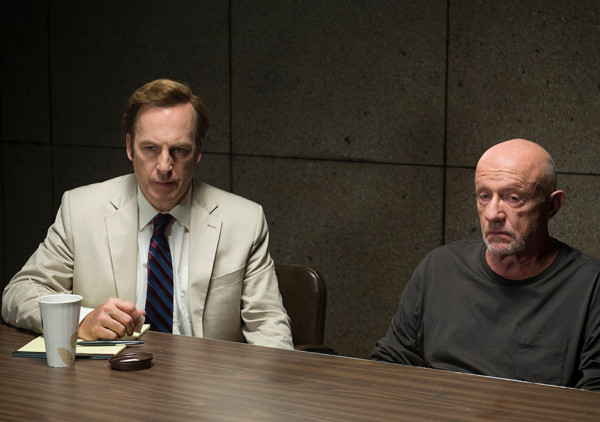 Jimmy was called in by Mike not so much for his legal skills as he was for being #upforwhatever. Mike asks him to spill some hot coffee on the younger detective so he can snatch his notepad. Jimmy acts above this at first, but eventually does it. He is a man of the people after all. He takes care of his clients! 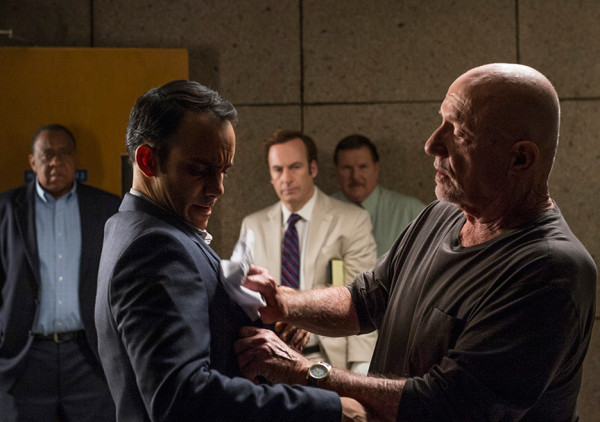 Mike reviews the notebook and has a sit down with his daughter in law again. He tells her that he was indeed on the line the night she overheard the angry phone call. “It was between me and my son.” 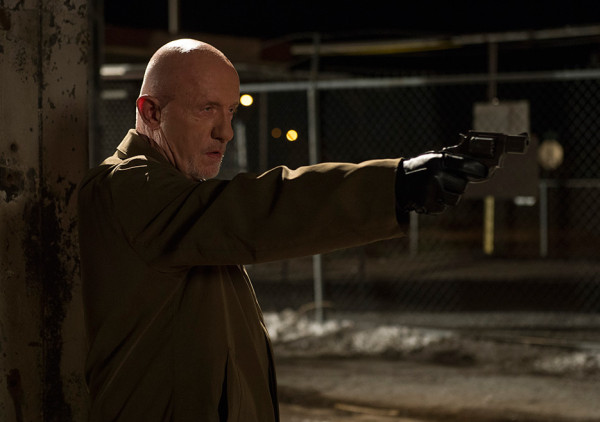 The flashback showing what lead to Mattie’s partners’ death was vintage Mike. He had found out that Hoffman and Fensky murdered Mattie. He set out to even the score by acting drunk and telling the two killers, dressed in full police attire, that he knew what they did. They waited for the bar to close and were gonna whack the drunken Mike. That plan went sideways for the two disgraces to the uniform when they pulled Mike from the squad car to take his life just as they had done his son. Unfortunately for them, Mike went Michael Corleone with the old hidden pistol trick, as he had a gat ready in the back seat of the police car. He took a bullet from one of the killers, but managed to off the two men before they could react properly. Mike had been stone cold sober and this certainly was no half measure. 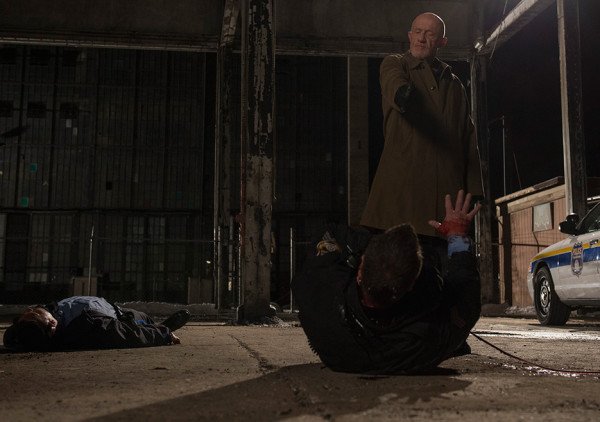 Mike had come clean to his son’s widow about the events that lead to her husband’s killing. The awful twist was the fact that Mike had advised his son, who was a by the book law man, to go along with Hoffman and Fensky’s dirty deals. The angry phone call was all about Mike convincing his son to debase himself like the rest of the police force. Mike has his son’s blood on his hands because turning dirty didn’t keep Mattie safe. He got killed for nothing and became dirty all at the same time.  This event made Mike a much darker person than he was prior to it I imagine. His guilt and anger shaped a lot of his decisions in the Breaking Bad years. 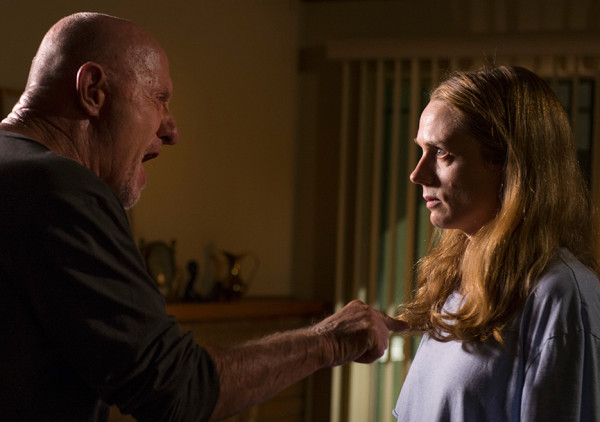 Mattie’s widow asks Mike who killed Fensky and Hoffman. “You know what happened,” Mike coldly said without admitting a thing legally. This entire episode was devoted to Mike and his story before arriving in New Mexico. We got very little of Saul and that was OK. Mike Ehrmantraut carried the show.

Better Call Saul is just as good as Breaking Bad was in its early stages. I say that without trying to hype a show unnecessarily. I don’t know if it can keep up that promise and pace, but I certainly hope that is the case as the seasons unfold.