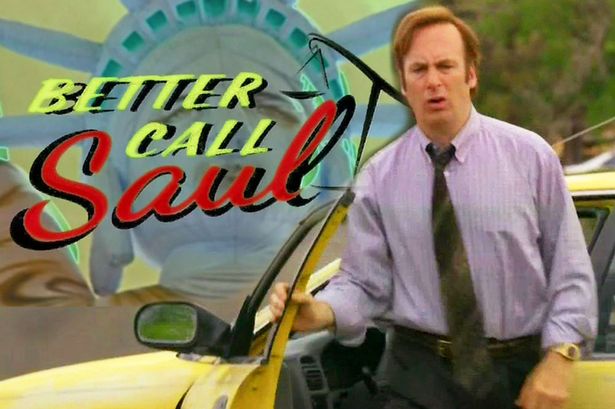 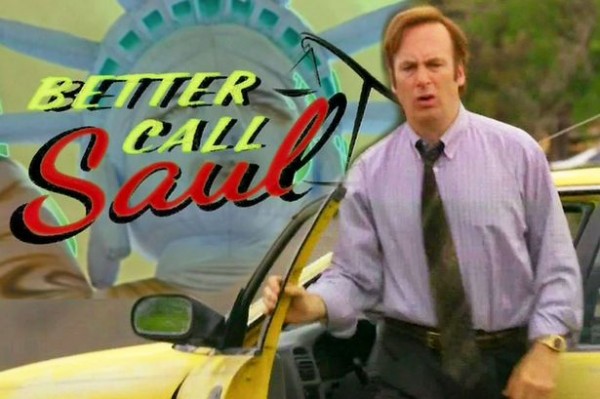 The much anticipated premiere of ‘Better Call Saul‘ popped off on Sunday night on AMC. The series gives us the background the story of lawyer Saul Goodman as he came up the ranks before meeting Walter White in ‘Breaking Bad’. It’s not an easy task to spin off a super successful show like ‘Breaking Bad’, so this show certainly has its work cut out for it.

The first episode starts out in a black and white scene at a Cinnabon. It is the present day Saul Goodman. It took me a second to remember Saul’s prediction of his fate as his relationship with Walter White was winding down. Saul was doing his daily tasks a worker at the food shop when he gets nervous as a bald guy stares him down, showing he still has plenty to be fearful about having been a part of the huge meth business in New Mexico. He comes home from work to a lonely home and pours some alcohol to ease his pain as he watches the Weather Channel. As the scene wraps up, he pops in a VCR tape of his old “Better Call Saul” commercials reminiscing about his time at the top.

As we jump to the past where Saul Goodman starts out as Jimmy McGill, it’s pretty apparent that the lawyer is not quite the polished guy we saw in Breaking Bad. He is a nervous wreck in the men’s room as the court awaits his entrance. He does fairly well once he gathers the courage to actually enter the courtroom to defend three teenagers whom he paints as pranksters. McGill does a decent job of defending the three guys, telling the jury that everyone has done some dumb things when they were younger. All his persuading goes down the drain when the prosecution simply plays a video of the kids cutting the head off a body at the morgue. Case lost obviously. 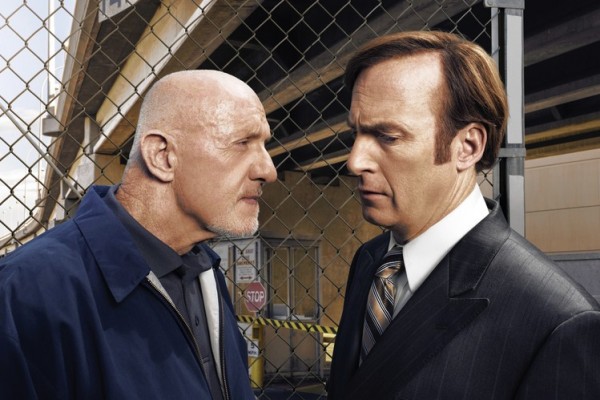 Jimmy at this point has no office, no secretary, and no cash flow from what I can tell. After he loses the case with the three teens that couldn’t have been won by Perry Mason, McGill gets shaken down by Mike Ehrmantraut for three bucks. Mike is running the parking lot booth at this point, before he became Gus Fring‘s go to guy. This is a good throwback to the Breaking Bad series to keep viewers compelled to give the series a shot.

Now we get to the meat of the show. Jimmy McGill visits his hermit like brother Chuck. No electricity and one hell of a process to go through before entering the residence. I don’t know exactly what McGill’s brother’s issue is, but dude is jacked up mentally. He is not an idiot or crazy, but he seems confined to his home because of an imaginary danger outside. Jimmy’s brother was part of a prestigious law firm before he was unable to perform once he had his mental break of whatever kind. Now Jimmy is trying to get his brother’s fair share of the money that he deserves as a founder of the firm. Howard Hamlin is the lawyer running the law firm now and he plans on sticking it to Chuck McGill by buying him off a few dollars at a time. Jimmy is having none of it even though he and his brother could use a few thousand dollars at the moment.

One of the pivotal moments in the first episode is when the prick running the big law firm tells Chuck that Jimmy needs to change his business name since it has McGill in it. No need in confusing folks who might want a big time team instead of a lawyer with no office to work out of. This sets the stage for the transformation into Saul Goodman. Chuck says Jimmy should maybe “build his own identity.”

Jimmy, strapped for cash and the bills piling up, decides to enlist a couple of shady skateboarders who tried to set him up by running into his piece of shit car with their body. He didn’t go for the scam, but is now going to use their limited skill set to get over on a local county treasurer who is accused of embezzlement. Jimmy thinks he can play the savior when the skaters pull the same scam on the treasurer’s wife. He wants to win her loyalty so that she hires him to defend her clearly guilty husband instead of using Howard Hamlin and his firm.

Things go sideways when instead of the wife getting freaked out after running over one of the skater idiots, she simply drives off. This is clearly not the way ole Jimmy McGill had it planned. The human element is always what throws plans off in these shows and in life itself. There is no accounting for what another person may do. Logic can’t dictate all.

It turns out that the driver wasn’t the target after all. The housekeeper was the actual driver of the station wagon that smacked skater bro. The skaters take it upon themselves to follow the lady back to her home. They go inside after telling the woman that they want money. Big mistake. I don’t know if they will make through episode two. When Jimmy arrives at the same house and knocks, he gets a rude meeting with our old pal Tuco Salamana from Breaking Bad. He puts his gat in the grill of McGill and takes him inside. In case your memory is a bit foggy, Tuco was a maniacal drug fiend that had no problem killing fools. This house call is not going to go smoothly for the skate brothers or Jimmy. Getting to the top is not easy and this is a good first test for Jimmy McGill. The next episode airs Monday at 10 pm which will be the regular night.

This first episode was interesting. I always liked the character of Saul Goodman. I want to see what it took for him to rise from mediocrity to get to the big money, even though I know it was shady dealings all the way. I like a few BB characters thrown in as well. I can only hope that Gus Fring is in the mix at some point. The last I saw the actor who portrayed Fring, he was in an awful NBC drama called ‘Revolution’ which was thankfully put out of its misery after two seasons.

Look for the recap for episode two on Tuesday.