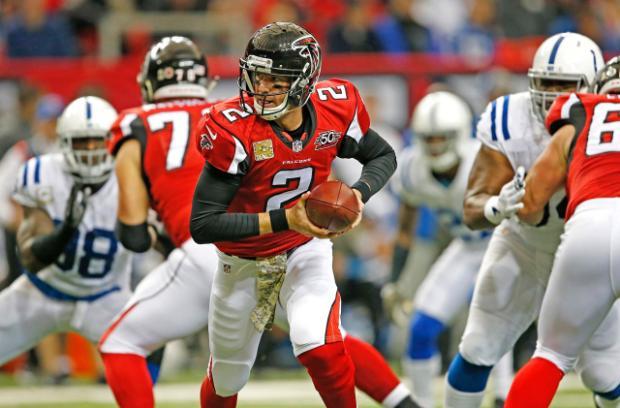 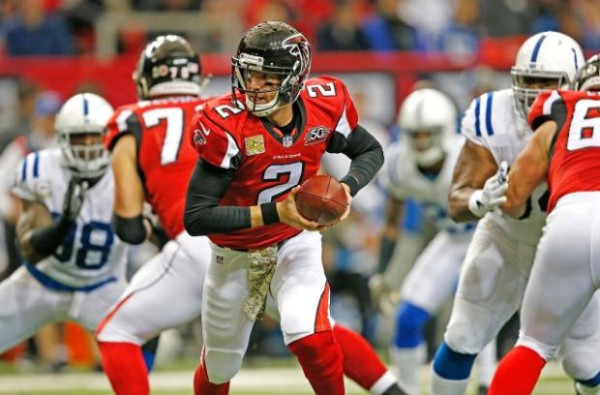 Atlanta felt good about things coming into the game against the Colts despite poor play the past few weeks. The bye week had given the Birds a chance to get healthy with Willie Moe and Leonard Hankerson returning to the lineup. The health meter went down faster than an old guy playing Mortal Combat with his grandchild after just seven minutes of play when Devonta Freeman left the game with a concussion.

Even without Freeman, who left the game with 43 yards on just three carries, Atlanta jumped on Indy with a long drive that ended with a touchdown throw from Ryan to Patrick Dimarco. Ryan made up for an earlier pick in the red zone with that TD pass to the seldom targeted fullback.

The Falcons went up 14-0 after another 80-yard drive powered by catches of 36 and 29 yards from Julio Jones. Ryan once again went to DiMarco for a one-yard touchdown.

Indianapolis wasn’t going away as Hasselbeck led his team on an 80-yard march spreading the ball around and even scrambling for part of the yardage. He found Ahmad Bradshaw in the end zone for a seven-yard score. 14-7 Falcons and the score stayed the same heading into the half.

Atlanta would receive the ball to start the second period. They made the possession count with an 80 drive that once again was helped by a big catch of 28 yards by Julio Jones. Near the goal line Atlanta benefitted from a penalty on Vontae Davis as he covered Leonard Hankerson. Two plays later Ryan again went to Hankerson and connected this time for a touchdown from the three-yard line. 21-7 Falcons.

After swapping punts, the Colts answered with another touchdown. This time, it was Bradshaw again on a TD catch from Hasselbeck. 21-14, Falcons again letting a lead evaporate.

After the teams traded turnovers, it was Indy’s special teams that made a huge play with Donte Moncrief downing the punt at the Falcons’ one-yard line. That set up the next play that would tie the game at 21 when Matt Ryan, lover of end zone picks on either end of the field, threw a one-yard pick six to D’Qwell Jackson.

Atlanta’s offense sputtered with back to back punts and then gave up a Colts’ field goal with just 52 seconds left in the game. Colts up 24-21.

Matt Ryan is very adept at running the two-minute drill, but 52 seconds was not enough in this game. Hankerson had a terrible drop as he proved to be unreliable again this week. Julio Jones had a big catch on the sideline with two defenders on him that was ultimately ruled incomplete even after a review. The guy took five total mini steps with the ball in full control but had it knocked away as he landed on the ground. It’s a catch to me, but that rule is biting a lot of teams this year.

The Falcons had a fourteen point lead at home that they simply could not hold onto or add to. They can’t blame the loss on a late desperation deep pass that ended up being ruled as a non-catch.

Julio watch:  Nine catches. 160 yards. Kept two drives moving. Had an incredible catch at the end but it ended up not being a catch at all.  No TDs on the day.

Fair weather fans we may be in Atlanta, but what can you do?

Was a catch. Not crying, just saying. And the Colts deserved the win anyway.

Says it all about the past five weeks.

Magic wore off for the #Falcons. 1-4 in last five, and that one win was a 3 point victory over #Titans

Matty Lite got booed and deserved it.