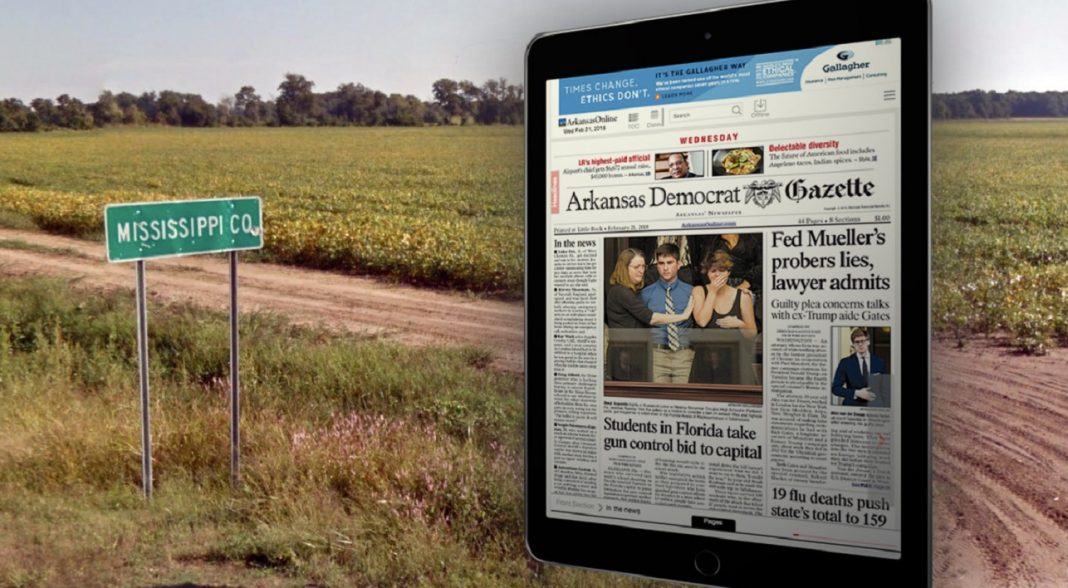 As more print media goes under, fighting to stay alive requires changing with the times and the Arkansas Democrat-Gazette is choosing to make that change. Rather than lose money on their print edition, the publication is offering iPads with their customer’s subscriptions, and it’s working, so far.

Even online news sites are struggling as Google has strangled display ads so that news divisions at places like BuzzFeed and Vice are getting slashed. Sponsored content seemed to be a life raft for some, but now companies like Blog Meets Brand aren’t able to pay their writers if the client doesn’t pay them on time. BMB used to pay writers whether the client was late or not, but now they’ve stopped that policy showing that the sponsored content life raft is a short term solution until web publishers discover a whole new model. We’ve heard from several people who left them for Izea which has become the official monopoly when it comes to sponsored content. As Izea has bought up many companies working as intermediaries for social media influencers, prices continue dropping on what can be made.

eBay even tried the social media influencer route with content writers for four years, but that ended abruptly in 2017 as they tried another tactic that insiders have said is failing even worse. As rates have fallen for sponsored content due to a plethora of web sites and social media influencers, it’s a buyers market. Three years ago getting $5 thousand for a 600-word article was a common thing, now that price has dropped to $300 – $500.

Thus, it’s now a change or die world in the news publishing world.

Changing With The Digital Age

Over a lunch of hamburger steaks, mashed potatoes and green beans, Walter Hussman delivered his pitch to the dozen or so attendees of the Hope, Arkansas, Rotary Club meeting. He promised that if they keep paying their current rate of $36 a month for subscription to the Arkansas Democrat-Gazette newspaper, even though it will no longer be printed daily or delivered to their door, they’ll get a free iPad to view a digital version.

The daily digital replica of the state’s largest newspaper will be accessed with an easy-to-use app they can download on the tablet that the newspaper is distributing to subscribers.

Hussman, the newspaper’s publisher, said Wednesday that by the end of the year, only the Sunday edition of the paper will be printed.

It’s a gamble Hussman feels compelled to take to sustain his newsroom of 106 employees and turn a profit, which the paper hasn’t done since 2017.

In March 2018, the paper began the experiment in Blytheville, a town of about 14,000 in the northeast corner of the state 155 miles (249 kilometers) from Little Rock, where the paper publishes. Each of the paper’s 200 subscribers was offered the iPad at the current print delivery rate, plus a personal training session to explain how to use the tablet, and print delivery stopped about two months later.

More than 70% of the Blytheville subscribers converted to the digital version, a figure that, if replicated statewide, is enough for the paper to turn a profit, which Hussman expects will be in 2020. Including distribution of the Northwest Arkansas Democrat-Gazette, which is not converting to iPad, the paper’s daily circulation was about 80,000 before the transition, said Larry Graham, vice president of circulation.

Hussman has said he’s willing to spend $12 million on the tablets, or about 36,400 iPads, which retail for $329. At the current lowest subscription rate of $34 a month, that would generate about $14.8 million in revenue per year, which Hussman said would turn a profit after expenses.

Rick Edmonds, media business analyst at Poynter, said two publications have tried similar experiments. In 2011, the Philadelphia Inquirer sold Android tablets for $100 if users signed up for a two-year, $9.99 monthly subscription, a program which Edmonds said was “very unsuccessful.” In 2013, the Montreal-based La Presse launched a free tablet app and discontinued daily printed editions three years later, though they’ve since become a non-profit.

To sell the Democrat-Gazette’s plan, Hussman is traveling the state speaking to civic clubs. He explains how advertising revenue for newspapers has dropped precipitously since its peak in 2006, and how digital advertising isn’t as profitable as media outlets originally predicted.

After the Rotary meeting, 65-year-old Steve Harris, a subscriber since the early 1980s, said he’s been using his iPad for about a month. There are “pros and cons” to the iPad, but he likes the photo galleries available on the digital replica, as well as its ease of access when he’s traveling.

In Hussman’s experience, skepticism is the initial reaction from subscribers of the newspaper, who tend to skew older, but eventually, most tell him they prefer it to print.

The digital replica looks just like the printed paper and is intuitive to navigate within the app. Clicking on the jump takes the user to the continuing story. The text can be enlarged. All pictures are in color; some also reveal videos.

This isn’t Hussman’s first controversial move to keep his newspaper profitable. In the mid-2000s, he thought papers publishing online content for free was short-sighted and the Democrat-Gazette’s website established a paywall earlier than most media organizations.

The tablets are essentially a long-term loan and subscribers keep them for as long as they pay for the paper. They’re also responsible for repairing or replacing the tablets, which come with Apple’s one-year warranty. Hussman said the newspaper doesn’t monitor usage or track users in any way. When it’s returned, it’s wiped clean and can be re-distributed.

Hussman isn’t sure whether the digital replica will appeal to younger generations, but enough people are converting for now.

Penny Muse Abernathy, who teaches digital media economics and behavior at University of North Carolina at Chapel Hill, said whether people will continue to pay depends on what the reader experience is like and if the news is still vital to readers.

“I think it’s a very smart move. It’s a very farsighted one,” she said.

The Arkansas Democrat-Gazette, which turns 200 this year, won two Pulitzers in 1958 as the Gazette before two papers merged, for its coverage of the integration of Little Rock’s Central High School.

“I wish we didn’t have to do this,” Hussman said of scrapping print, but to sell the newspaper would be a “dereliction of our responsibility.”

Cutting print delivery hasn’t disappointed everyone, though. Dolly Henley, 61, decided to subscribe at the Rotary Club meeting. She and her husband haven’t had the Democrat-Gazette delivered to their home in the 25 years they’ve lived in the tiny town of Washington, Arkansas. Now, with the digital replica accessible by iPad, she’s excited to get daily “delivery” again.

“Getting it to the digital world is just where it’s at right now,” she said. “Change is good.”