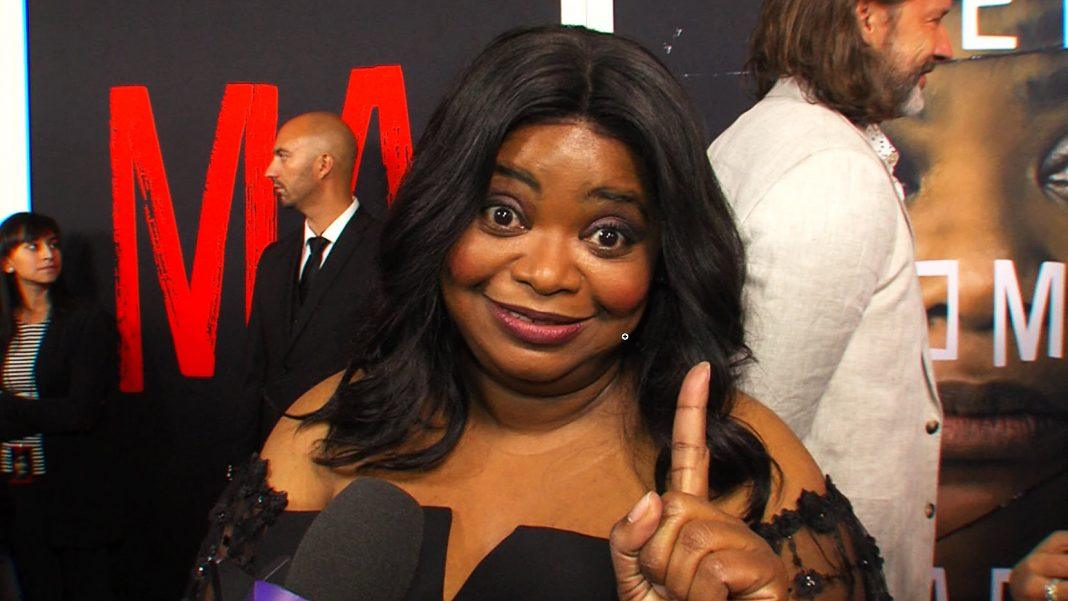 She might have built a career playing the supporting nurturing role, but Octavia Spencer got a chance to change all that with the over the top horror flick “Ma.” I’ll admit, it’s not a great horror movie, but Spencer truly keeps it together. Dare I say, she literally saves the film from the typical hackneyed Blumhouse treatment. Plus she kept the black person from getting killed in the first 15 minutes of the film. “Ma” opens on Friday in theaters.

A few of her intense ‘looks’ reminded me of her terrific co-star role on the tv show “Mom,” like when she went from smile to dead serious look. “Ma” is worth checking out just to see her obviously enjoying letting her inner crazy out. It’s like she was able to take Minny Jackson from “The Help” out on a rager.

It’s easy to think of her as that woman we love to see in those roles, but truth be told, Octavia Spencer is a movie star. She has been for almost a decade since audiences and Oscar voters fell in love with her as Minnie in “The Help.” Since then she’s gotten two more supporting actress Oscar nominations, one of which was for a film that became another “surprise” blockbuster (“Hidden Figures”), ramped up her production company, acted consistently in film and television and written children’s books. She even executive produced this year’s best picture winner, “Green Book.”

But there was one thing she hadn’t yet done in her nearly 25 years in the business: Starred in her own film. She’d been a lead before, but she’d never been first on the call sheet. Until now.

The film that righted that wrong is “Ma,” a Blumhouse horror movie in which she plays a small town woman who buys beer for some local high school students and lets them party in her basement, before things take a sinister turn. It opens nationwide this weekend, and it’s unlike anything audiences have seen Spencer do before.

Spencer says her pre-established affinity for serial killer-themed material (Forensic Files, in particular) “decompresses my mind — I need to know if I can figure out who the killer is!” But, performing Sue Ann’s horrifying acts in Ma (like sewing a girl’s mouth shut, applying a scalding iron to a young man’s stomach, and running an unsuspecting woman over with a pickup truck) required a much deeper dig into malevolent psychology.

She’d found herself, despite all the success, being considered for only “nurturer” or “sage” roles. She wanted to stretch beyond that ‘supporting’ character.

The only reason “Ma” came to her was Tate Taylor, who wrote and directed “The Help,” but also has been Spencer’s friend since they were production assistants together on “A Time to Kill” in 1995, dreaming about a move to Los Angeles and a career in movies.

The script Taylor saw was written for a white woman, but he thought of Spencer nonetheless.

“She had expressed to me she was frustrated,” Taylor said. “She’s grateful for her career but she was being offered the same thing and never the lead. Women of color just don’t get the lead unless they’re a slave or a maid.”

So he called his former roommate (they lived together in a mid-city Los Angeles duplex for seven years), and proposed this semi-deranged film that would be a departure for both of them.

The script needed some work, though. Ma didn’t really have a motivation, she was just crazy, and Taylor changed that.

“The things that he changed weren’t based on race,” Spencer said. “It was just giving her a backstory, to give her a reason, in her mind, as to why she takes such a dark turn.”

“She’s a normal person when you first meet her, but underneath there’s a loneliness and sadness that I empathized with as a human,” Spencer says of the character, though she quickly closes the case on this killer: “If you don’t walk out of this movie feeling extremely disturbed…”

Spencer admits that she a ‘full-on blast’ making the movie and just bringing out the inner crazy.

“It was like, let your hair down and go crazy,” she says. “But the things I had to do as a character… there would be something seriously wrong with me if I found any pleasure!”

But ask Spencer what her dream role is and the answer might surprise you.

“I always say, the part of producer,” she said. “Not only do I get to create opportunities for myself but for other people. I still live by that. And if there is something that I’m dying to do, if it’s not written, as a producer, I have an option now to create it for myself.”

She’d been optioning books going back to her time on “The Help,” but her first executive producing credit actually came about by accident when Ryan Coogler’s “Fruitvale Station” lost $150,000 of its $900,000 budget.

“I put in some money and then I started making some calls to people… I don’t even know that I had the resources. I just knew that it was important for me to do,” Spencer said. “We were not going to let it die on the vine, and I had just worked with people who I knew had the resources and so I called.”

She got some nos, but those people regretted it and have since kept bugging her for whatever else she’s got.

“I say, I’m not going to call you unless I need you again and you know when I make that call it’ll be something worthy of your time,” Spencer said with a smile.

She’s got a lot on her plate right now. She’s jet-lagged, for one, having just gotten off a plane from London where she’s filming the remake of “The Witches.” She’s also teamed up with LeBron James to produce and star in a Netflix series about entrepreneur Madam C.J. Walker, as well as an AppleTV+ crime drama “Truth Be Told.”

Her company, ORIT Entertainment, doesn’t really have a mission statement (“I know people are supposed to have them,” she laughed) but she knows what she’s looking for.

The name ORIT actually harkens back to a time when people didn’t know her name. It was her first day as an intern in casting director Francine Maisler’s office and she kept hearing Maisler call “Orit! Orit!”

“I was just sitting by the phone and finally mid-day one of the assistants in the office says, ‘I think you’re Orit,’” Spencer said.

She said loves Maisler, by the way, who was embarrassed about the “Devil Wears Prada” moment. And “Orit” kind of became her alter-ego. Besides, Spencer is worlds away from that time of anonymity now.

“At this point in my life, I will be heard,” she said.