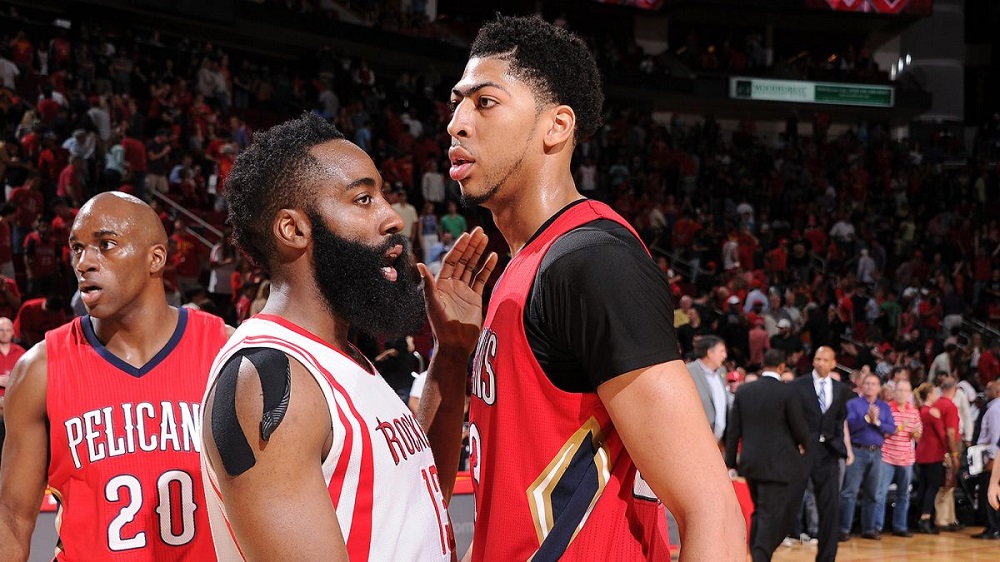 As the 2017-2018 NBA season winds down, people are starting to pay attention to the race for MVP. All season there have been two guys at the top, the obvious choices, Cleveland Cavaliers superstar LeBron James and Houston Rockets leader James Harden.

Harden leads the best team in the NBA, and he is averaging a league-leading 30.9 points per game to go along with 8.9 assists, all while shooting nearly 40 percent from beyond the arc. James is the best player in the world. So, it has to be one of those two, right? Maybe even Harden by a landslide with LeBron at No. 2?

Well, maybe not. Golden State Warriors forward Draymond Green has a dark horse candidate he’d like everyone to remember as we come down the stretch: New Orleans Pelicans superstar Anthony Davis.

What Davis has done in the midst of the Pelicans 10-game winning streak has been absolutely insane. If you watched a single Pelicans game in February, you witnessed one of the best players in the world playing the best basketball of his career.

No one was better than AD in February. The Brow averaged an insane 35 points and 13 rebounds per game over the course of the month, carrying New Orleans up the playoff ladder after everyone has given up on the franchise. DeMarcus Cousins went down, and everyone said the season was over. Davis set out to prove everyone wrong.

“Houston is having a good year, but I’m most impressed with New Orleans,” said Green. “With some of the games they won, with some of the numbers that AD has put up, has been incredible and they’re doing that without DeMarcus. I think there was kind of a consensus around the world that once DeMarcus went out, that they’d struggle, and yet, AD is putting them boys on his back…That’s impressive.”

Of course, there is still a lot of basketball to be played, and in order to truly enter the MVP conversation, Davis and the Pelicans will need to keep playing at the insanely high level they have been. But, again, anything is possible when The Brow is on your side.

“If [New Orleans] keeps winning at the rate they’re winning and he keeps playing at the rate he’s playing, who knows what happens,” said Green. “What I will say is, James has been second two times. And both of those years, he’s lost to like historic seasons. The season of Steph’s year, Steph was just off the chart. And then Russ had like 57 triple-doubles last year. The two years that he’s come in second, he’s lost two in like these historical years.”

Anthony Davis is in the midst of one of those historical years. He and Boogie were having one together, and now he’s having one by himself. Davis isn’t far behind Harden with 28.1 points per game, 11.1 rebounds, and 2.3 blocks. Davis is certainly one of the top, if not the best, two-way player in the league today.

The best part is, while the Pelicans don’t have an All-Star cast behind Davis and a few other guys, the team, and franchise has really come together after Boogie’s injury. They’re tired of being second best (or, more realistically, like 18th best), and they’re determined to make this season a success.

When Boogie went down, everyone assumed the Pels wouldn’t even be in the race for the playoffs, now they’re fighting for the third seed. You’d have to go all the way back to the New Orleans Hornets Chris Paul days to find a New Orleans basketball team that finished the season that high. You’ll have to go back about that far to find a NOLA basketball team that made it out of the first round of the playoffs as well.

“You knew it wouldn’t be long before he actually does pull through and win one, and then I know if you’re him, you’re sitting there like, ‘Man, now here come AD putting up different historical stat lines every night,’” continued Green. “But James has had a great year. Their team is performing great. So, I don’t know what happens, but he’s put himself in the best position he possibly can, that’s for sure.”

And while Anthony Davis is currently nursing a sprained ankle, the team around him is more confident than ever. Even if he misses a few games, the Pels have a real chance to extend that winning streak into late March. And with such a tight race in the Western Conference for seeding, it would certainly be to their advantage to do so.

The Pels have also earned their stripes against the Rockets this season, besting them in their most recent matchup and playing them within seven points the game before (both with Cousins, of course). So, I’m not going to guarantee anything, but if the Pelicans can extend this streak, grab a high seed, and maybe even play the Rockets tough through six or seven games, Anthony Davis could certainly finish high up on that MVP vote.