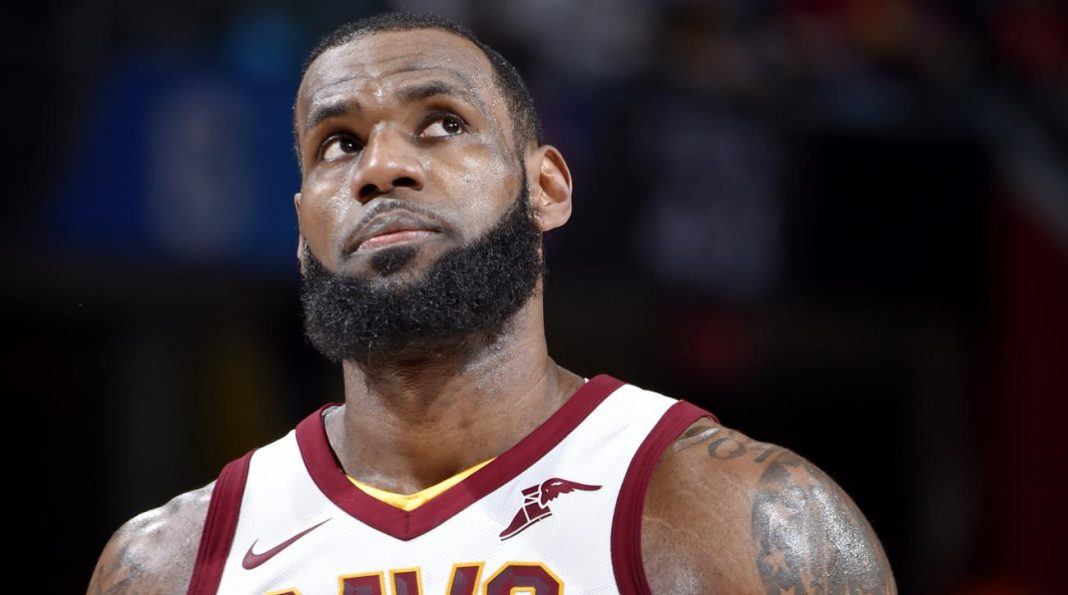 As the 2017-2018 NBA season starts to wind down and we approach the playoffs, the chatter around LeBron James and his impending free agency only gets louder. Everyone has essentially written the Cleveland Cavaliers off this season, so now the question is where does the best player in the world end up?

Well, LeBron’s alleged short list of teams was recently leaked: the Los Angeles Lakers, Philadelphia 76ers, Houston Rockets, and Cleveland Cavaliers. Of course, for LeBron to stay in Cleveland, they would need to really turn things around. A playoff elimination before the NBA Finals almost guarantees that James won’t be on the roster next season.

As for the rest of the teams, they’ll have to wait a while before hearing anything from The King. LeBron not only denied that this list is accurate or even real but also insisted that he is committed to the Cavs and finishing out this season before giving any thought to where he’ll play next season.

“I’ve still got too much work to do here,” said LeBron. “One thing about me and my career, you probably don’t know, you haven’t been around me, that I handle my business accordingly, and when that time comes, I’ll take care of that. But right now, my job right now is to get these guys prepared for the Clippers tonight and then how we can continue to get better going down the stretch.”

The Cavs had a slight resurgence after the All-Star break thanks to a number of shocking trades that completely shook up the roster; however, they’re back to losing. That being said, I still wouldn’t want to face LeBron James in the playoffs, but it’s hard to believe that James has overly high hopes for this season given the team’s current situation and the way other teams have been performing in both the Eastern and Western Conferences. You know he’s been thinking about it, no matter what he says.

James is right, though. He’s the best player in the world, and any team that he chooses to play for becomes a legitimate championship contender literally overnight. There’s a lot of well deserved hype behind LeBron that he’s built up over his 15-year career. There’s also a lot of excited basketball fans over the prospect of LeBron ending up with a big market team such as the Lakers.

“I understand that I’m a free agent at the end of the summer, so I understand the frenzy that comes with it,” said James. “It’s not my first rodeo, but I don’t, it doesn’t bother me. I don’t talk about it too much. Like I said, I’ll handle that whenever it comes, but it’s I understand that the conversation happens here because, first of all, they have cap space. And this league is much better when the Lakers, the Knicks, and the Celtics are all good at the same time. That’s just how it is. So that’s what also creates the frenzy.”

He’s right. That’s what people want (especially those in the NBA that want to see the league itself grow). Big market teams have the money and the fan power behind them to encourage players to come make a name in the big city. LeBron, of course, is in a unique position where he doesn’t need to go to New York to make a name, he could go to the Minnesota Timberwolves and turn them into a big name team.

Still, the cities are trying to draw him in. Fans in Philadelphia put up billboards calling on LeBron to join in on #TheProcess and come to Philly this offseason. The Sixers have really turned things around this season, and LeBron is all they need to push them over the edge into the championship competition.

In response, the Lakers put up a billboard that said, essentially, Screw the process, we win rings here.

While James isn’t so easily influenced, he has enjoyed seeing the billboards.

“It’s the same as I stated when I saw the Philadelphia billboards,” said LeBron. “Listen, I’m 15 years into my career, and fans and cities want me to play for their team or have dreams. I think it’s pretty cool. Listen, my kids see things like that, they think it’s cool, and I think it’s cool. It’s flattering more than anything, that a fan of a team or somewhere would want me to play for their city, so it’s very flattering.”

Of course, wherever LeBron ends up, they’ll need to be able to clear room on their salary cap to fit in James’s max deal. The man wants to win, but he’s still LeBron James—he’s not going to play for free (or less than $30 million).