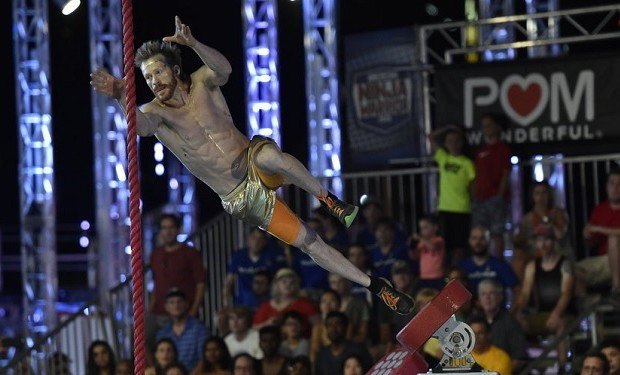 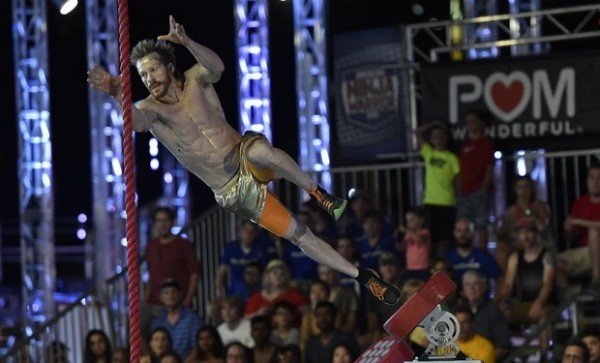 What happens in Vegas….is a hell of a lot different than what happens on other American Ninja Warrior courses. This was my first look at the National Finals so I’m loving the faster pace. Two and a half minutes is all the runners get to finish stage one in Las Vegas.

Half the finalists ran in this episode. The rest will go at it next Monday night. This was the most fun I had all year covering the event.

There was less time spent on each course runner, but the action was non-stop. Here’s what happened to the elite athletes who were fortunate enough to make it to the city and course that never sleeps.

Like Doc Holiday in Tombstone, Paul Kasenmire was “rolling,” right up until Iseman jinxed him with “he’s gonna finish.” On the contrary, the course finished him.

One of the strangest athletes from this season of ANW, Nicholas Coolidge, took his shot at stage one. This guy lives in his van and even dumpster dives to stay alive and to make time to be a Ninja Warrior. That’s dedication…and clearly crazy. He was not prepared for the Jumping Spider though. He got all wet and headed back to his van.

There were more than a few early exists on stage one before the show got going good. The Propeller Bar was no joke and highlighted several nasty spills from on high.

The Godfather David Campbell has the best nickname and one of the smoothest styles on ANW. He didn’t look that smooth last night though as he was so cautious after failing on stage one the past three years. It happened again in 2015. This time it was the Coin Flip that knocked the veteran out of the running. That obstacle appears easy, but is like a Mario Bros. section that will end your game if you look past it.

Gordon White has to take his time as a dog trainer, but he should have sped up for stage one. He would have ran out of time anyway, but the cargo net at the end flipped him into the water. Got to follow John Wooden‘s advice when it comes to the Finals, “Be quick, but don’t hurry.”

We finally heard the buzzer go off when Tremayne Dortch finished the course after a couple nightmarish years in Vegas. He squashed the Jumping Spider and made up lots of time on the last few obstacles to finish with just over a second left! 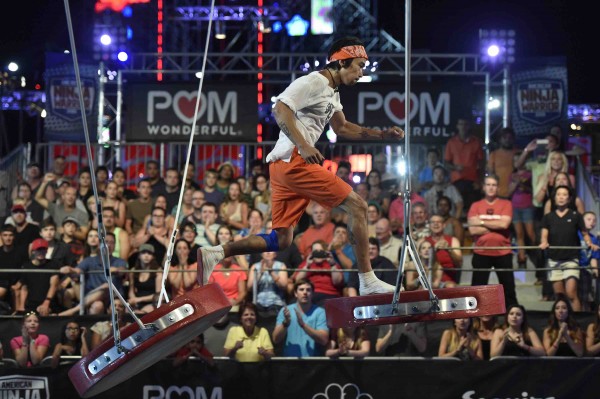 The speed aspect just makes the show better. Through the “regular season” of American Ninja Warrior they have plenty of time to plan and pace themselves. That’s helpful as it readies the runners for each new round. The Vegas course requires a flow that only the best can manage.

One of the biggest disappointments on the night was James McGrath. He was really down on himself and the crowd was shocked as he slid down the Spider Wall. Wet shoes were part of the issue there. Use that towel my man!

Akbar continued to amaze me with his commentary, calling Neil Craver “so goofy.” Craver is a bit out there, but the guy is an artist so that’s expected. The Goofy Ninja finished the game and is set up for stage two.

I love the guys that quit work to train full time. That makes me want to be a Ninja Warrior, mainly to retire early. I just need a sponsor, even the most corrupt company….I can be bought. Brian Arnold quit his job and it paid off. For the fourth straight year he is through stage one and closer to the million dollar prize. I wonder if you can get unemployment while training?

Michelle Warnky had a slow start and even with her dad firing up the crowd for her, she could not complete the Jumping Spider.

I was hyped to see legendary Sam Sann make his run. This longtime Ninja competitor had plenty of trouble in the past with sections involving a trampoline. It got him again on the Propeller Bar. He just can’t crack the code on that leap. He needed to go higher to grab on with his arms fully, not just the hands. Me telling Sam Sann how to do a course. Wow.

My odds on favorite to win this year is Geoff Britten. Even though he admitted stage one was not his strong suit and he was very cautious at the start, he managed to make it to the buzzer. Though counter intuitive, stage two should be easier for him.

One of my favorite stories this season has been P.J. Granger. The concrete worker from Bedford, Indiana quit drinking and stood online for over 150 hours to get his shot! Incredible dedication that could not have happened without a very supportive wife. He got bit by the Jumping Spider, but had a hell of a run to get to the Finals. I have a feeling he got much more out of ANW than just a chance to compete. Dude changed his very life.

Love Flip Rodriguez. He’s all business now. He ended up with one of the fastest runs on the night with his silky smooth style. Kid could have got a bye for stage one. It was made for him. Too good, too quick, just fluid motion through stage one.

Gym owner David Yarter better work on his cardio next chance he gets. Can’t be winded halfway through stage one! The elite runners shouldn’t even break a sweat at that point. To his credit he paced himself just right and hit the buzzer with just half a second left. It would surely suck to get to the last platform and run out of time after conquering all the obstacles. Got to beat the clock too.

Ben Melick won. Not on the course. He flamed out on the Sonic Curve. He did win his GF over with a marriage proposal right after getting out of the water. His lady said yes. Lucky him, they seemed like a good fit.

Ryan Statis and Danile Gil are polar opposites. Statis is a maniac with a beard, and Gil is an opera singer with long curly hair. Both made it through the course and will move on to stage two. Gil had the second fastest time on the night even though he is the most #unlikelyninjaever.

Chalk one up for us old guys. Travis Rosen is the oldest Ninja through stage one ever and he finished fourth overall!

Big Jessie Graff fan. She has “it.” She’s bubbly, beautiful, and charismatic. Hopefully ANW has done wonders for her career. She made an awesome save on Sonic Curve to stay alive. She was ecstatic after landing the Spider Jump. The hardest part is the stick…walking the wall is easy. She was not able to get up the Warped Wall however, so her night ended there.

Got to start at the top of the platform on the Warped Wall. No idea why she and others walked to the bottom. Maybe the rules weren’t clear? Obviously more momentum is gained from the starting at the top.

5′ 2″ powerball Dustin McKinney is still alive. He is maybe my favorite competitor to watch. He has confidence, but told Kristine Leahy he was just “having fun.” Whatever works!

You want to talk confidence. Kevin Bull looks like he was born on a obstacle course. No fear, no hesitation. His wild run ended the night with Bull at the number one spot with a time of 1:40.26. That was a great time, ten seconds ahead of another guy who may be just as confident, Daniel Gil.

The top five finishers are an impressive list and it’s hard to imagine next week’s class being better, but we’ll wait and see.