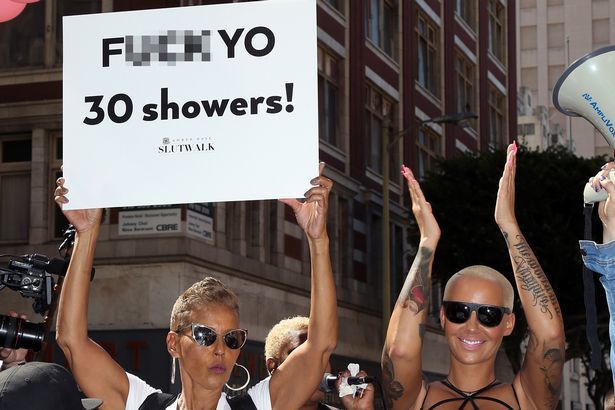 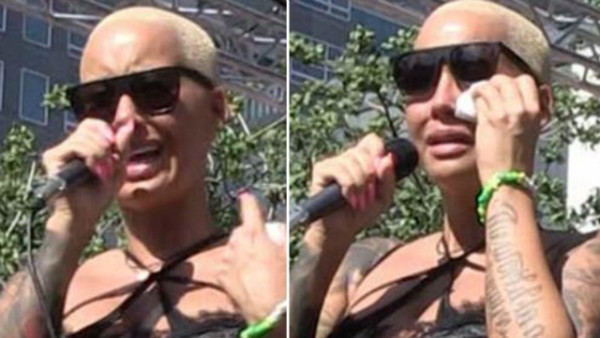 There is something about owning the very thing that people refuse to you forget. For some of us, it’s our weight. For others it’s our behavior. For Amber Rose, it is her past and she is no longer allowing people to hold her to it.

Amber Rose’s Slut Walk was not about deviant behavior or fighting for the right to, ya know, be a slut (well kind of). It was about standing up to a society that has allowed a culture of sexual misconduct that puts the blame on the victim. It was about standing with women who’s past is kind of shady and no one will let them live it down. It was about embracing a woman’s right to be whoever the hell she wants to be on her terms and by her definition.

I have to really hand it to Amber Rose. She is using her fame and connections to do more than get ahead (or another famous baby daddy) and that is commendable. One thing about me, I give props where props are due, regardless if I have shared a less than favorable opinion about you in the past.

A lot of people are getting it wrong when describing what the event was about. The name can probably be misleading to some but that’s when looking past the surface and seeing the deeper meaning in things comes into play. Rooted in the notion that “sluts are women too” (What a motto!), it was a special time.

Although Saturday’s event was not the first of its kind, it was the first to be heavily backed by a celebrity’s name. Amber Rose’s Slut Walk is actually an international movement started by Sonya Barnett and Heather Jarvis who didn’t like the fact that a Toronto police officer, while speaking at a university about campus rape, actually said, “…women should avoid dressing like sluts in order not to be victimized.” And therein lies one of the founding principles of the walk.

Amber is really the perfect person to do this for many reasons and her realization of that is what made it happen. She is no stranger to being called a bitch, a slut, a whore and more and many times she has been publicly shamed for her past as a stripper and video girl.  She shared how she has been “slut shamed” since the age of 14 and how she really felt when her ex-husband Wiz Kahlifa writing a song about her saying she’s “nothing but a stripper.”

“He went on to make a song saying that he ‘fell in love with a stripper, but fell out of love quicker’…As you can imagine, him being the love of my life, regardless of us going through a separation or not, it was extremely hurtful.” 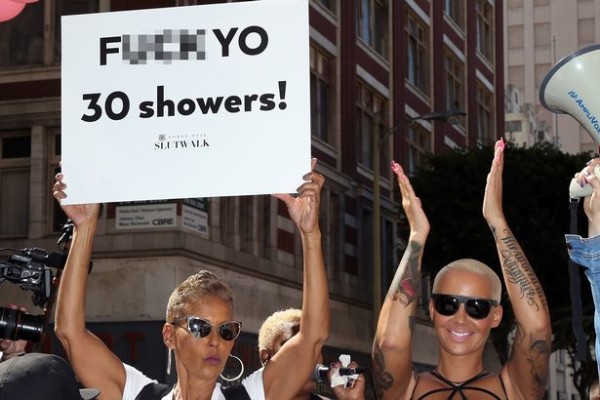 She also said she’s moving on from her ex-boyfriend Kanye West (who said he had to take 30 showers after being with her) and his hurtful comments.

“”I want to forgive Kanye about what he said about me. I want to let all of that negativity go.”

At the event, she spoke about what she has gone through and gave a tear filled speech about the fact that her past has nothing to do with the kind of mother she is or the fact that she deserves to be treated with respect.

The walk was definitely a cathartic moment for Rose seeing so many people come out and support the movement.

The rally was more of an empowerment affair than anything else. Her mother Dorothy was there as well holding a sign that said, “Fuck yo 30 showers” and a shirt with this quote,

“Just because I’m a sexual being doesn’t mean I want to have sex with you.”

You never know what kind of healing people really need. Sometimes the facades that that people put up have to come down and all it takes is giving back to others what you yourself need to find that place of peace.

It is not every day that someone with Amber’s past and present does something this deep and open for others who have experienced what she’s experienced. The slut walk is not a walk of shame but a walk of freedom, declaration and hope. And I am here for it.