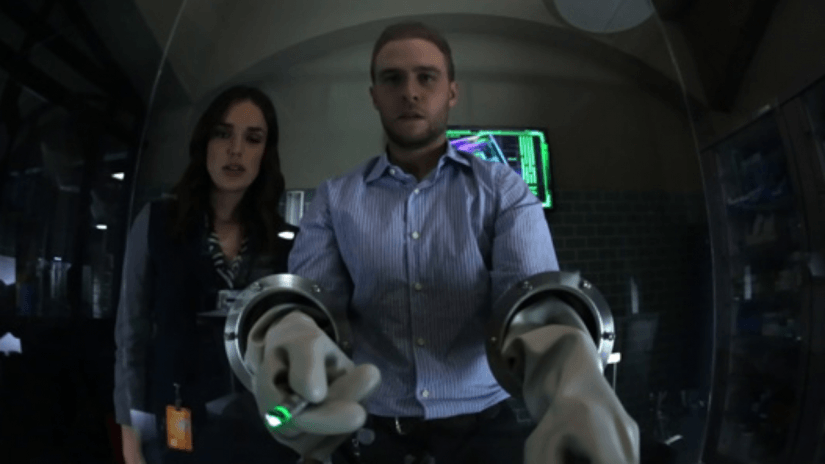 Agents of SHIELD naysayers who quit in Season 1 had better get their act together and order their DVDs, or stream where they can because they have really missed out. The latest episode of Season 4, The Return is probably the most awesome and emotional since the final episode of Season 2. This recap I’ll do here probably won’t do it justice which works out quite well. You can get to know what’s happened but you need to experience it for yourself as much as AIDA has now. Requisite SPOILER alert here but the point of articles like this is to inform you of what’s happened, how we think about it and get you excited enough to watch it yourself. So join AIDA and Team SHIELD in an action-packed, emotional roller-coaster ride.

Last we saw of the team, they all woke up from the Framework. As expected, Fitz is filled with guilt over what he’s done while Coulson and May wake up feeling disoriented. While that’s happening, AIDA wakes up in her new body and snatches Fitz away by teleporting before anyone can shoot. Speaking of shooting, the Zephyr is under attack from Anton’s attack plane.

The episode starts with Anton standing in a corridor reading the Darkhold while talking to someone. He hears the commotion in the other room and decides to go there but strangely says that he’s tired of talking to himself. Clearly, he wasn’t talking to his head on the table in some other part of the oil rig. He witnesses AIDA teleport Fitz.

Coulson is frustrated while he and May deal with what amounts to time compression of living two lives. They remember their lives in the framework from the points of their respective regrets. Anton makes his presence known and attacks them. He overpowers them, but Coulson manages to chip Anton’s face off with the force shield in his artificial hand. Up in the sky, the Zephyr remains under attack until the crew manages to bring back the plane’s power and weapons systems with Elena’s help. It’s a situation that reminds me when Captain America was trying to keep the helicarrier up in the air in Avengers. They easily deal with the enemy plane when they get their power back.

Back at the rig, Coulson is putting May up to speed with current events. May’s disappointed that he couldn’t tell the difference between her and the LMD.  It’s also a bit hard to believe that May wasn’t with us even before they dealt with Eli Morrow. They make it their mission to keep Mack safe while he’s plugged in.

Meanwhile, AIDA, or rather Ophelia and Fitz are in a secluded beach where Ophelia is relishing what it’s like to be real. Like the others, Fitz is dealing with time compression but guilt as well. Ophelia continues to blame Radcliffe for all of her acts in the Framework, that everything she did was due to her following her programming. We also find out that Fitz first met Ophelia during his academy days. Since the moment Ophelia woke up as a human being, Mallory Jensen has done an incredible job with the character. Ophelia later professes her love to Fitz before they teleport from the beach.

Speaking of love, Elena is arguing with Daisy why they left Mack in the Framework. Daisy is forced to tell Elena about Hope. Elena tries to jack-in to the framework, but Daisy convinces her not to go because it’s too dangerous and because they need to keep Mack’s body safe.

At the oil rig, May and Coulson try to figure out a plan to fight more LMDs. May tells Coulson her guilt about her part in the death of Jeffrey Mace. Phil is still struggling to reconcile his feelings on what happened between him and LMD May now that he’s facing the real one.

At the Zephyr, we find out the reason they can’t land the plane to refuel. Since their escape from SHIELD headquarters, Talbot has been on the hunt for the plane and whoever’s inside. Mace’s body was discovered on a beach after AIDA presumably disposed of it but not before Anton mutilated the corpse. Talbot is also assuming Daisy’s involvement in what happened at SHIELD HQ.

Meanwhile, Fitz and Ophelia end up in a house similar to where they stayed in the Framework. Aside from the feelings Ophelia is feeling, Fitz asks her about empathy or caring for others. Ophelia says that her ruthlessness in the framework was part of her programing to make Fitz happy and that her adjustments there was to make everyone else inside happy. They lost me however with the Russian since he hasn’t really jacked into the Framework. AIDA also made efforts to make him happy. Fitz realizes that his friends were in danger and convinces AIDA to help. But to help means running into danger and Ophelia is afraid to die.

The Superior has, at last, become an interesting character. Back at the rig, it turns out there was more than one copy of himself and those copies faced off with Coulson and May. The other copies went out and shot at the rig with torpedoes forcing May and Coulson to leave Mack as the rig gets flooded. This time, Anton seems more menacing and more dangerous and has grown comfortable in his current situation. Ophelia appears to a copy in the rig to tell him to cease the attack. Anton is free to do what he wishes and tells Ophelia the irony of feeling regret, fear and suffering. Ophelia goes back to Fitz and takes him.

Daisy and the rest arrive at the rig to retrieve Coulson and May. Elena, however, insists on getting Mack out of the collapsing rig but Ophelia, Fitz and Mack appear inside the Zephyr. Jemma and Agent Piper ices Fitz and Ophelia.

The team returns to the devastated SHIELD base to refuel the Zephyr as well as to temporarily keep Fitz and Ophelia contained. The base is practically done for. The team meanwhile decides what to do with Ophelia especially after she helped save Mack. They also discuss Fitz on what life he’ll choose after waking up. Jemma is afraid that Fitz still loves Ophelia. The gravity of the situation kicks in to Jemma when Coulson and May says that they now have two lives they remember; both can be considered real. There could be more to this when season 5 kicks in as well.

Fitz and Ophelia talk in the containment cell while Jemma listens into their discussions. In a scene, Ophelia wonders if she’ll be forgiven as Fitz continues to struggle with his inner identity. Fitz realizes his similarity to Grant Ward being raised by an overbearing father figure. Ophelia continues to set herself up with Fitz and comfort him as Fitz has lost hope rekindling his relationship with Jemma. When Fitz said he’d lost hope, Ophelia takes the opportunity to build herself up to Fitz until Fitz says that he still loves Jemma. Jemma is relieved upon hearing that. But Ophelia’s behavior suddenly changes. She begins to sound like Madame Hydra again and gets mad with disappointment and heartbreak. Emotions she cannot yet control. It’s pretty hard to describe, and you’ll feel sad for her Fitzsimmons fans will feel relieved at the same time. Like a child, she thinks her devotion to Fitz is a two-way street and tries to force Fitz to like her. Simmons goes to get Fitz out of the room, but Talbot and his team suddenly arrive assuming everyone is an LMD, and assuming Daisy quaked Mace’s bones apart.

Ophelia gets enraged that she couldn’t teleport out of the room. Agent Davis manages to get Fitz out of the room, but Ophelia exhibits another power aside from teleportation, Lincoln’s electrical power. She shorts out the room and proceeds to create havoc in the base. Fitz warns everyone that Ophelia is unstoppable as she now has the powers of every Inhuman they captured in the Framework.

Coulson explains everything to Talbot, but he gets news that their opponent is everywhere and Talbot assumes that it’s Yoyo. Ophelia finds Fitz and kills his escort, but Agent Piper manages to shoot her repeatedly. Davis empties his clip into Ophelia, but she heals herself.

The Zephyr launches and Talbot breaks the standoff and falls back to the base. At the Zephyr, Fitz continues to deal with his guilt unable to look at Jemma. This is perhaps the most emotional, heartfelt moment in the series since the Season 2 finale with Calvin, Daisy and Jia Ying. Maybe even more so. And if they can pull off such an effect, they have the chops to make it into the cinematic universe like fans have always wanted. Just a small part, cameo or mention Mr. Feige. You have the power to make many people happy and to truly connect the universe you created. I won’t spoil this moment for you guys. Watch it.

During the standoff with Talbot, Coulson was wondering where Yoyo was. Daisy knew and they find her jacked into the Framework. Yoyo wakes up inside the burning HYDRA base strapped to one of the Inhuman chairs, maybe just as powerless as Daisy was and she screams.

We then find Ophelia in Anton’s sub with him lecturing her about heartbreak. What heals it? Time. What keeps it at bay? A fifth of vodka. Most of us know the feeling and this scene is intense in itself. You’ll really feel something for her here.  To relieve Ophelia, Anton offers to help her build the Framework, for real, with the help of the Darkhold. So either the team stops totally Ophelia in the next episode, or she could rebuild HYDRA in Season 5. As Gratitude and perhaps intoxication, she tries to make love with Anton but ends up destroying the robot in rage just as another copy comes in. As mentioned, The Superior just got more interesting. Still flat, but interesting. Anton tells Ophelia that with all her powers, she is perhaps one of the most powerful beings in the universe. And if she is and they execute their plan, wouldn’t it be enough for the Avengers to look into? She is perhaps more powerful than Ultron now. Wouldn’t you AOS fans agree?

Anyway, what can stop a being such as her? As Talbot leaves the SHIELD base, the interdimensional portal comes to life revealing Ghost Rider’s return. We’ll be in for an exciting finale folks. Just hope ABC has enough special effects budget to make sure it will be the best episode yet.

Four and a half stars out of five if I am to rate this episode for its action with May and Coulson vs. Anton, for the range of emotions by the impressive Mallory Jansen and for the drama between Fitz and Simmons. Unfortunately, Agent Davis couldn’t make it as he and Agent Piper make good minor agents. Philinda is still on hold, and we still don’t have Ward or Tripp back. There’s still the season finale where Ophelia and Anton begin to reshape the world, perhaps by bringing over some help from the other side. Yoyo got herself into trouble, and it would be interesting to know the fallout of the events in the HYDRA Framework.