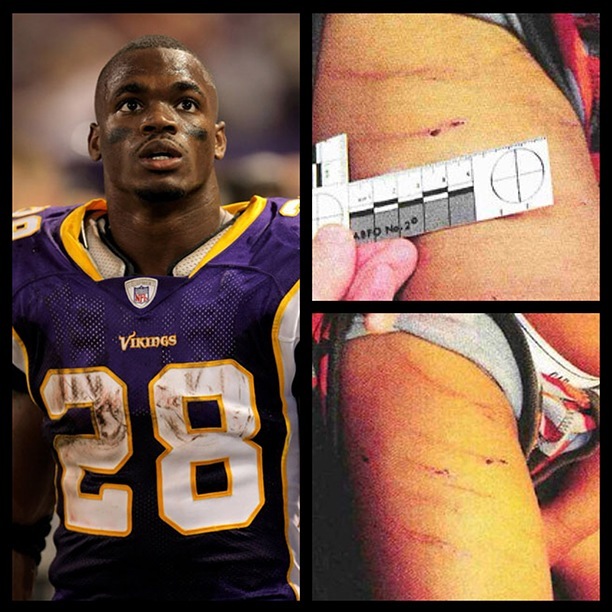 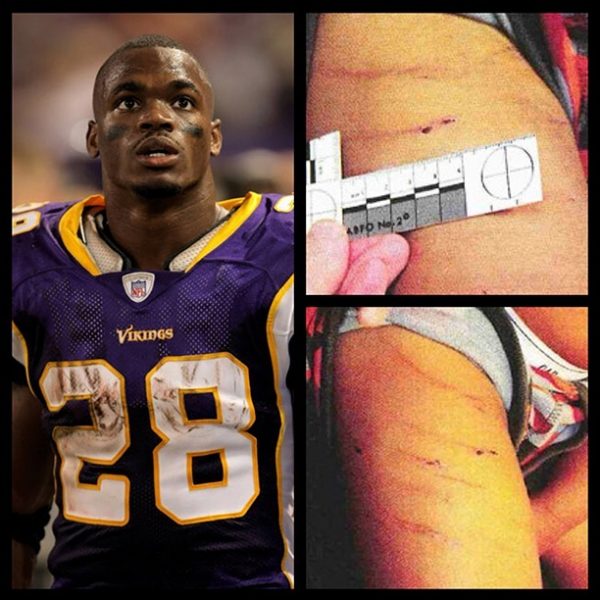 As the NFL deals with a new abuse case almost weekly, there is one that sticks out. The Adrian Peterson case involves not a woman, but a child. Peterson has been indicted on charges of injuring a child. The charges stem from what Peterson refers to as a spanking he gave his four year old to discipline him. Peterson has never had off the field issues before this popped up. Also, this case had went to the grand jury in Texas more than once before they finally handed down an actual indictment. This case is much more complicated than the Ray Rice situation that was escalated with a video showing exactly what happened. There is no video in the Peterson case, but there are pictures of the result of the whipping that was given to the young boy by his father, Adrian Peterson. The photos are quite shocking and upsetting to many people. And with the NFL on notice from the public that they are not going to stand idly by and cheer for beaters of women, the Peterson case is right in the bright spotlight now.

Peterson has been suspended from the Vikings and will not be back on the team until the legal matter is straightened out, whatever that means. That process could last until 2015. So basically the Vikings will be without their best player for most of this season unless the trial is moved up. That is not the focus of this situation but it is a real issue for a team that is playing millions for a player that is not going to be able to contribute to the team for a while, maybe ever again. You can bet the fan base has their own feelings about Peterson’s actions as well. But their views are likely skewed by their desire to have a winning football team.

The part of the public that is shocked at the photos does not believe in spanking, whipping, or what they would simply call beating a child to discipline them. The other people who think Peterson was just doing the same thing that their parents did to them as kids to keep them in line are not appalled at this case. While the photos may show a dad that went a bit too far, folks with experience as the spanker and the spankee know quite a bit about this discipline method. And despite what some in the media say, there is a difference in how discipline is handed out depending on the part of the country that you grow up in. It also matters about the culture one grows up in to a large extent. Families lower on the economic scale are more likely to use spankings as a way to make their kids mind. All that must sound insane to a person opposed to hitting a child, even if the kid is in need of punishment of some sort. There lies the problem. The two groups of people will never agree about what is abuse when it is borderline. And despite the photos in this Adrian Peterson case, it is borderline.

I live in the South and kids get whipped here. I felt the sting of a belt many a time for doing something wrong. I don’t think I was hit as a four year old in the way Peterson hit his boy. But I certainly did have whelps from spankings over the years. Was it abuse? No. It was done to discipline me. This is where the high minded folks like Bob Costas, whom I respect a ton, would say that is an abuse victim’s mentality……to not admit being hit was abuse. I disagree, but I will say that hitting a kid as a disciplinary action is still using violence against another person unnecessarily. That is why I stopped spanking my kids years ago. Whipping them, even for misbehaving, is being violent and I don’t believe that is the right way to do things anymore. There are other ways to discipline kids, but I would never tell other parents not to spank their kids. They are the ones who have to live with these young people, not me. It is fine for people like Costas and Boomer Easiason to speak about how they would discipline a child, but they get to go home to their own lives. They don’t have to worry about other people’s kids and how they behave going forward. It is easy to be an armchair quarterback when it comes to raising other folks’ kids, quite another to deal with these youngsters on a daily basis. I would love to see how those opposed to spanking deal with some of the worst behaved kids I have seen in public. Yes, if you spend time with the children and talk to them and teach them patiently, they will do right most of the time. But many parents work two jobs, are single parents, and are so pressed for time it is ridiculous. It is a shame that so many people can’t take a few minutes to discipline kids in a peaceful way. But that is a reality.

The bottom line in the Peterson case will be intent. Peterson has said that he went too far. He made a mistake but he was not being evil. A four year old does not deserve a whipping of that magnitude of course. But those critical of the man did not grow up as he did. Peterson may feel like he has to keep his son in line from the get go so there is no chance of him ending up in jail later on for lack of respect for rules. I don’t know the running back’s thoughts either, and that is just a guess. I believe Peterson will be found innocent of these charges. I don’t know much about Texas but it sounds like spanking is not a foreign technique to the citizens there.

I know this is 2014 and not the 80’s when I grew up, so there is a conversation to be had about spanking. I know there are better ways to keep kids in line with the rules. I also think children should be protected from real abuse and neglect. The Peterson photos are appalling to some, but he had no evil intent and realizes his mistake I believe. Many in the sports media didn’t even know what a “switch” was when this story came out. Yet they felt qualified to say how Adrian Peterson should deal with his son. If these well meaning people know so little about the way some cultures hand out punishments, do they really know much about the rest of their culture and daily lives?