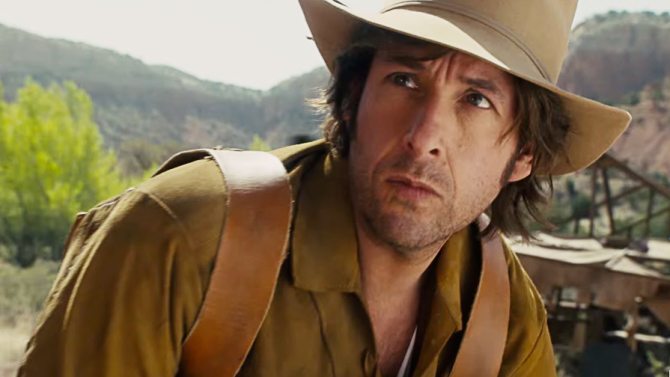 Can Adam Sandler even make good movies anymore? That is the question going through many folks’ minds right now. I know it’s one of the burning questions I have.

Here’s the thing with his newest, Netflix distributed movie The Ridiculous 6; It’s not a good. That’s a given I know, BUT, and this is a big but, he does have moments and characters that shine. And by shine, I mean that they are somewhat entertaining. Other than that, however, there is no redeeming grace for this film.

Sandler is a master at the absurd and in the past, without a doubt, it has worked for him, but it has yet to recapture his glory years. The Ridiculous 6 definitively boasts that brand but borders the offensive far too often which only add to its unfunniness.

I mean, he plays a white man named Tom, raised by Native Americans during the frontier days because he was orphaned when his mother was killed. He lives with them, takes on their way of life, is given the name White Knife and even dresses like them in full on “traditional” Native American attire.

But that’s only the beginning of a story so convoluted that it’s a good thing you can rewind the movie. The gist of it deals with him going on a quest to find his real father, who was kidnapped right after the two meet for the first time. This quest takes him on a journey in which he finds five other men all fathered by his dad, and together they form the ridiculous 6. It’s a very far-fetched narrative.

Even with the unbearable plotlines at a time, there is really only one “standout” performance that I personally found engaging and worth mentioning-Taylor Lautner’s. He plays Lil Pete, a country snaggletoothed hillbilly with a heart of gold, and a third nipple that he proudly informs every person he meets that he has. He is entertaining in his slap happy part. He truly commits to the role. His character probably has the scene most closest to being funny too when in an attempt to distract townsmen while his brothers steal the money needed to rescue their father, he is hanged. Only, because he has a strong neck, it not only doesn’t work but he swings and plays, making “weeeeee” sounds while in the noose. Some people find that part in bad taste I am sure, it just all depends on your sense of humor.

The laughs are few and far between outside of that, and it’s a shame because, at this point in Sandler’s career, you would think that he’d get the hint and start making better movies. There’s just no way to put it. Especially with an all-star cast, it should have been a much better film. But when you start off with a truly ridiculous story, you can’t really expect much from it anyway.

The other clearly unattractive thing about the movie is that there were no real female characters that added any value to the story. I mean, yes his native American love interest had moments, but all the other minor female roles are reduced to overly sexualized side parts that seem to be in place because someone thought it would sound good or be funny. And that’s unfortunate.

The Ridiculous 6 is a prime example of the need for new and innovative writers and creators to be given a chance to bring their work to the masses. Sandler and his crew are too seasoned and too smart to keep making these kinds of films. It’s embarrassing. I mean Terry Crews‘ character, who yes is one of Tom’s brothers, playing the piano with his penis is way out there.

Furthermore, people should not automatically have a preconceived notion that a movie you are involved with making from creation to exaction is going to be bad. But that’s what happened. There were reviews with folks anticipating how horrible it will be. And as of this writing, other articles referenced the fact that it is no longer available on Netflix because it is that damn bad. While those reports are false, it just aids to the fact that people are tired of having to endure this kind of self-indulgent crap. It is a slap in the face actually and honestly; it’s no wonder that it is a Netflix film. No other entity would touch it. And that is dangerous territory for the streaming service. It has a reputation for having top notch original series so Lord forbid that its reputation for original movies be the exact opposite.

There are so few things enjoyable about Ridiculous 6 that it’s just best you take my word and the word of other reviews, pass on it and stream Friends for the 100th time.