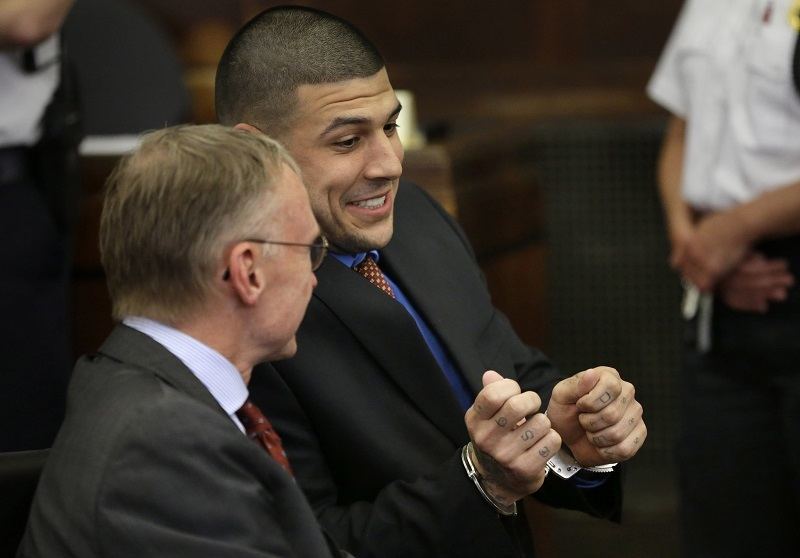 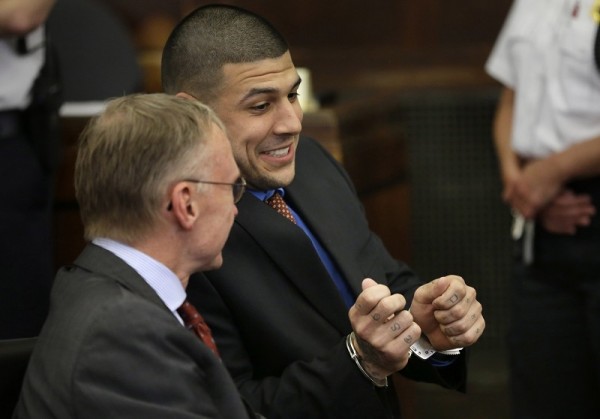 Aaron Hernandez‘s saga continues as he’s once again having to prepare to get back in court after now being charged for trying to silence former right hand guy and witness, Alexander Bradley in the face and leaving him for dead, prosecutors said Monday. Like a scene out of a film noir, this silencing tactic didn’t work, and Hernandez didn’t make sure the job was completely finished. It seems that at that point in his life and football career with the New England Patriots, the man felt he was untouchable or just desperate to cover up so he could land his big payday football contract.

Hernandez was indicted Friday by a grand jury in Boston on a charge of witness intimidation, according to the office of Suffolk County District Attorney Daniel Conley. It’s the latest criminal charge against the former star tight end, who once had a $40 million contract with the Patriots.

The 25-year-old was convicted last month of killing Odin Lloyd, who was dating his fiancee’s sister, in June 2013. He also faces two counts of murder in Boston, where he is accused of gunning down two men in 2012 after one caused him to spill his drink at a nightclub.

The latest charge is connected to the Boston killings. The Suffolk County DA’s office said the victim of the intimidation was a witness to those killings, which happened on July 16, 2012.

“Hernandez allegedly shot him in the face on the morning of Feb. 13, 2013, and left him to die on the side of the road in Riviera Beach, Florida, after the witness made a remark about the homicides,” the office said in a news release.

The office did not identify the witness, but it is clear from several other court proceedings that it is former Hernandez friend Alexander Bradley. 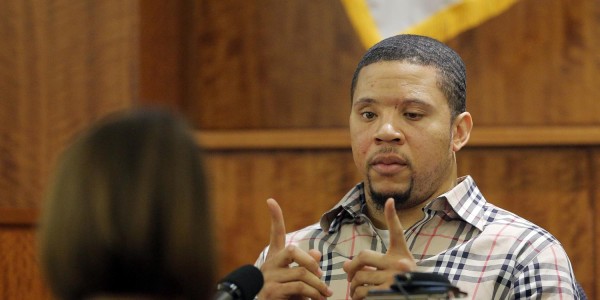 Bradley has sued Hernandez in Florida, saying that on Feb. 13, 2013, he, Hernandez and two other men went to a strip club in Miami. According to court papers, Hernandez and Bradley got into an argument at the club and then again later. Prosecutors in the Lloyd case said in a filing made during that trial that Bradley then made “disrespectful remarks” about Hernandez.

“Shortly thereafter, the car pulled over in an isolated industrial area, where Bradley was shot between the eyes. The defendant exited the car and quickly dumped Bradley’s body on the ground before fleeing the scene,” according to a filing from the Bristol district attorney’s office.

Bradley was found soon after by people who worked in the area and he survived, although he lost an eye. He refused to cooperate with police at the time and no charges were brought in Florida.

While the shooting happened in Florida, Conley’s office said Hernandez could legally be prosecuted in Massachusetts because he is accused of willfully causing injury to a witness with the intent to impede a criminal investigation in Suffolk County.

David Jaroslawicz, Bradley’s civil lawyer, said it was “totally new” to him to hear prosecutors’ allegations that Bradley witnessed the 2012 shooting and that Hernandez shot him after Bradley made a remark about the killings.

“I know nothing about it,” he said. “This is the first I heard about it, you’re telling me.”

He said he did not think it would affect Bradley’s lawsuit.

Bradley was called by prosecutors to testify in the Lloyd trial, but the judge would not allow him to discuss the Florida shooting. Instead, he told jurors about how Hernandez had said he had a difficult time trusting people, including his friends.

Hernandez, a native of Bristol, Connecticut, is serving a term of life in prison without the possibility of parole for Lloyd’s killing. The witness intimidation charge carries a maximum sentence of 10 years in prison.

An arraignment has not yet been scheduled for the witness intimidation charge. A hearing on the murder charges is scheduled for May 21, although Hernandez is not expected to be in court.