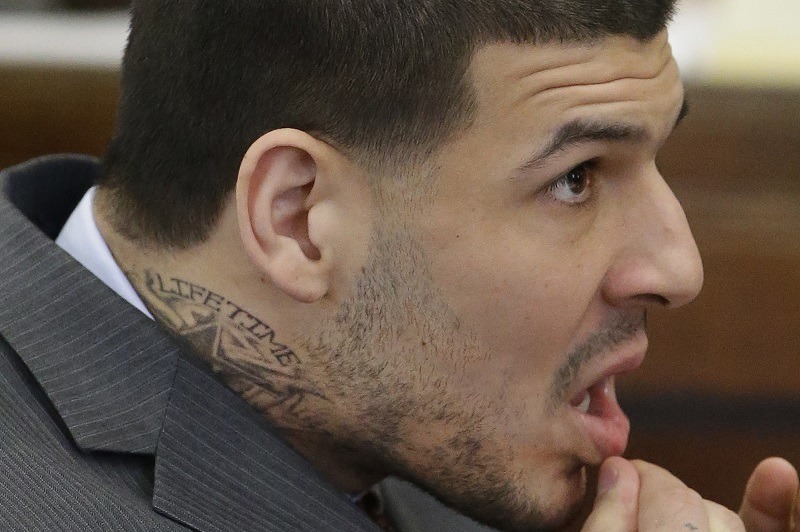 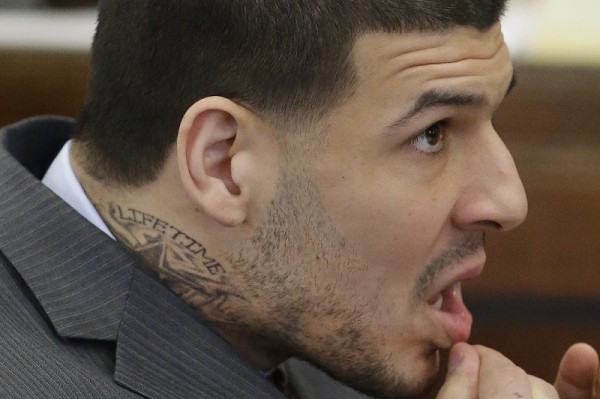 Ex New England Patriots football player, Aaron Hernandez is making sure to get a media splash this week as his first court appearance happened on Thursday since he was sentenced to life in prison for murder. Naturally he pled not guilty to the charge that he tried to intimidate and silence a witness by shooting him in the face in a another double murder case.

He was just recently in trouble for allegedly standing as a lookout during a gang fight, and now he’s claiming to be cash poor while sporting a new prison tattoo on his neck with the word “Lifetime” over a star. I’m sure plenty of people will analyse that to see what it means.

It’s a violation of Massachusetts prison regulations to get a tattoo, to tattoo someone else or to possess tattoo paraphernalia while incarcerated. Possible sanctions include disciplinary detention for up to 10 days and loss of a privilege such as television or radio for up to 60 days. The Department of Correction did not immediately return calls seeking comment on whether Hernandez has been disciplined.

Hernandez, who grew up in Bristol, Connecticut, was convicted last month in Fall River in the 2013 killing of Odin Lloyd, who was dating Hernandez’s fiancee’s sister.

The former New England Patriots tight end was in a Boston courtroom Thursday to be arraigned on a witness intimidation charge in the shooting of his former friend Alexander Bradley. 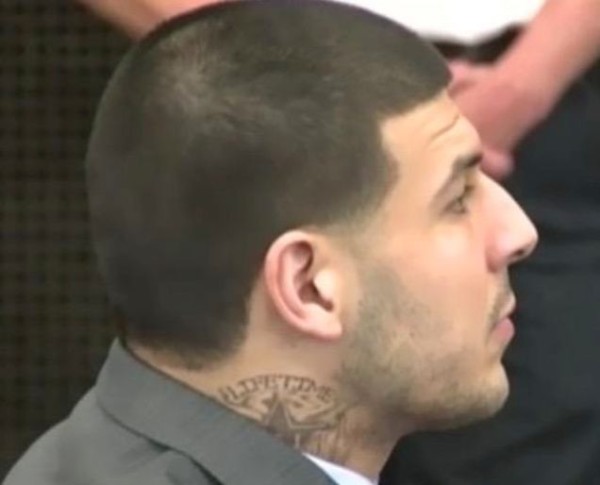 Bradley was in a Boston nightclub with Hernandez on July 16, 2012, when they encountered two men, Daniel de Abreu and Safiro Furtado. After de Abreu accidentally bumped into Hernandez, spilling his drink, Hernandez became irate, followed the men and then fired five shots into their car while they were stopped at a red light, killing de Abreu and Furtado and injuring a third man, prosecutors said.

Bradley responded by saying, “It’s probably because of the stupid stuff you did up there in Boston,” Haggan said.

The next night, the two men went to another nightclub. They argued over the bill and over a phone Bradley left behind, Haggan said. Bradley fell asleep on the ride back to their hotel, and when he woke up, Hernandez was pointing a handgun at his face, Haggan said.

Bradley suffered a near-fatal wound, resulting in the loss of his right eye, Haggan said. He said Bradley was pushed out of the car and Hernandez drove away.

Prosecutors asked Judge Jeffrey Locke to join the witness intimidation case with the murder charges against Hernandez so the cases can be tried together. Hernandez has pleaded not guilty in the double murder case, too.

The judge scheduled a hearing for June 4 to discuss combining the cases and to set a trial date. He said he hoped the case could go to trial in November.

Hernandez’s lawyers suggested January instead. They didn’t say anything about the charges in court and wouldn’t comment afterward.

Haggan said prosecutors want to do DNA testing on the handle of a .38-caliber gun they believe was used in the double killing.

In a separate hearing Thursday in New Bedford, Judge Richard Moses ordered a 60-day extension of a restraining order barring Hernandez from selling his 2005 Hummer and keeping the money.

Lloyd’s mother, Ursula Ward, has filed a civil lawsuit against Hernandez, and her lawyers are trying to track down his assets. Ward’s attorneys filed a temporary restraining order after the vehicle turned up for sale at a used car lot in Wrentham.

Ward’s attorneys have placed an attachment on Hernandez’s $1.3 million house in North Attleboro, meaning it cannot be sold without them being notified.

An attorney for Aaron Hernandez says the former New England Patriots player is running out of money because he’s had to pay so many lawyers.

Attorney John Fitzpatrick made the comments Thursday during a hearing in New Bedford, Massachusetts.

Hernandez was convicted last month of the 2013 murder of Odin Lloyd, who was dating the sister of Hernandez’s fiancee. Lloyd’s mother has sued Hernandez, and her lawyers are trying to track down his assets.

Fitzpatrick says Hernandez was paid for only one year of his now-terminated $40 million contract with the team. He says Hernandez has had to hire a ”platoon of lawyers” for his criminal cases.

Hernandez pleaded not guilty Thursday to a witness intimidation charge that prosecutors say is related to a double murder he’s also charged in.