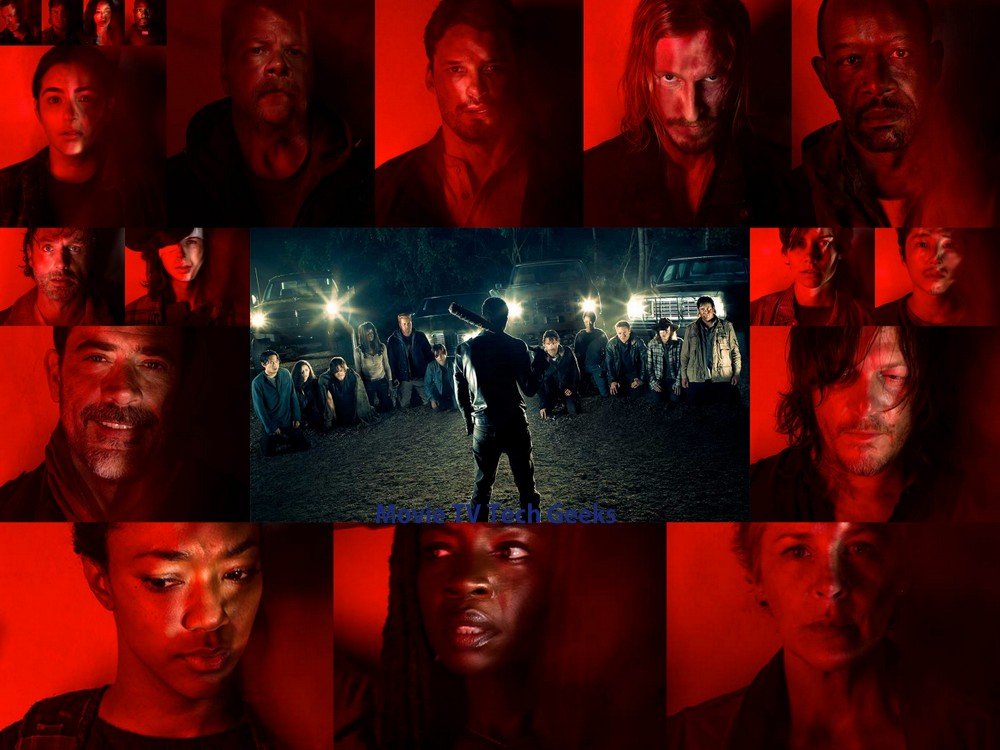 “The Walking Dead‘s” season 6 season finale seemed to have split fans of the show who hated the cliffhanger (a poorly executed stalling tactic to bait fans) and those who are biting their nails wondering who’s getting the brunt of Lucille’s wrath by Negan.

“The Walking Dead‘ will be kicking off it’s season 7 premiere on Sunday night finally answering the question of who will be killed or if it will be more than one person. For that answer, you can check out our previous article about this which says who gets that homerun hit.

Any Google search gives the comic book version of the story’s answer, plus countless theories and speculation like ours. But with the show’s propensity to remix the events from the Robert Kirkman and Charlie Adlard comics (very few characters die on the comics and on the show in the same exact way), it’s impossible to know who we’re about to lose until the bat finally makes its landing. 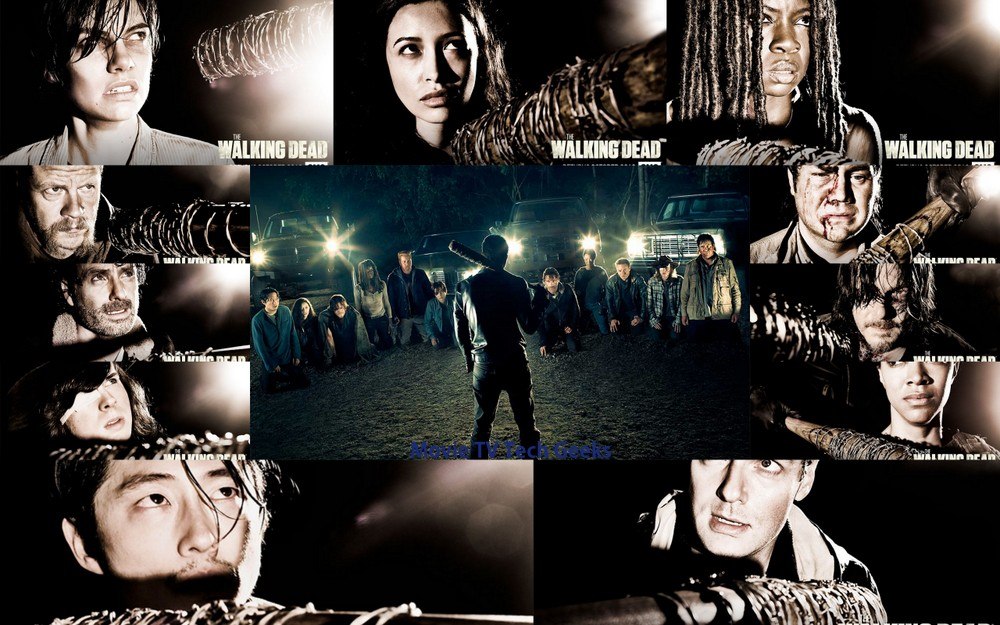 1. “Walking Dead” producers swear that those online spoilers are wrong and you still won’t actually know who Negan killed until you watch.

Certain characters are ruled out right off the bat, if you’ll forgive the bad pun: Rick (Andrew Lincoln) and Carl (Chandler Riggs), both ruled out based on Negan’s dialogue in the season six finale: “Anybody moves, anybody says anything, cut the boy’s other eye out and feed it to his father.”

2. How Did The Walking Dead Team Keep such a Big Secret?

Smoke, mirrors and body doubles. In several interviews, Walking Dead comic book creator and executive producer Robert Kirkman revealed the tactics used to keep Negan’s murder victim under wraps. “There has been a lot of tactics used in filming that have been used on films — monitoring actor movement and trying to do things in secret,” he said. “We’ve employed body doubles in places to make people think that people are in places that they’re not. It’s pretty exciting to try and hide certain things. This is a big season, so we’re not just protecting things that happen in the first episode; there are things that happen in the second, third, fourth, fifth, sixth episode and beyond.”

3. Will there be more than one victim?

RELATED NEWS
'The Boys' Season 2 Finale: What I Know ended with a big bang for FangasmSPN

That’s one of the popular rumors right now that Negan will kill more than one person in the lineup. For his part, Kirkman said, “I don’t know that our audience is necessarily bloodthirsty enough to be wanting to hear that there’s another death. One death should be enough for this audience and one death will definitely have the effect that we’re looking for.” But whether or not two or more people die in the premiere, expect the blood to flow moving forward. “It’s a very dangerous season,” Kirkman explained. “We hit the ground running with the first episode, and that really sets the tone for this. Negan is ever-present. This isn’t the end of his story; this isn’t any kind of singular event. This is the introduction of a new status quo in this world, and it’ll make the show more dangerous than it’s ever been.” 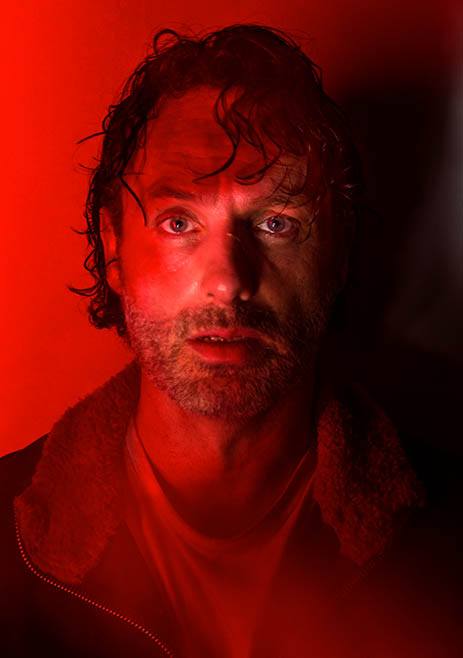 4. Where does Rick go from here?

He’s one of the only characters in the Negan lineup we can mark off as safe — for now, at least, and only to a certain degree. At New York Comic-Con, the Walking Dead team revealed a clip from the season seven premiere, which shows an alive but shaken Rick threatening to kill Negan. The bat-wielding maniac smiles at that and gives a big speech about how important it is to have a right hand. He then drags Rick off toward the nearby RV, with Rick’s hatchet in his possession. In the comics, during their first-ever meeting, the Governor be-hands Rick. The show has shied away from that twist, but was it simply being saved to add further impact to Negan’s arrival? While we shouldn’t be too worried about Rick’s head, it’s definitely worth stressing out about the future of his hand.

5. What to become of the survivors of Negan’s Lucille?

Best to clarify that these are people Negan hasn’t killed yet, but are very much on the table for the season moving forward. For now, at least, we can mark a few characters as safe, seen in the official season seven trailer: Tara (Alanna Masterson), still out on a supply run; Father Gabriel (Seth Gilliam) and Spencer (Austin Nichols) holding down the fort in Alexandria, with Enid (Katelyn Nacon) and baby Judith on board; Jesus (Tom Payne) and Gregory (Xander Berkeley), still at the Hilltop; and Carol (Melissa McBride) and Morgan (Lennie James), palling around at the Kingdom. 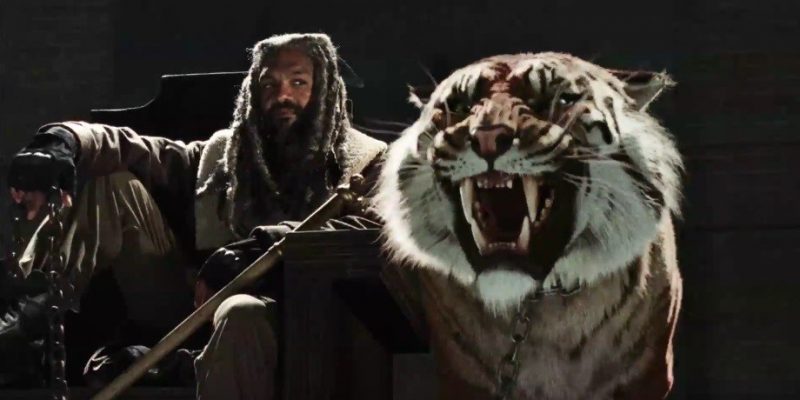 6. Just what kind of ‘Kingdom’ will there be?

Walking Dead takes a slight turn from Game of Thrones this season with the introduction of the Kingdom, one of the zombie apocalypse’s oddest communities. It’s based in an abandoned high school and is ruled by Ezekiel (Khary Payton), the so-called “king” of these people. Those who don’t fear Ezekiel’s royal title should at least fear his royal tiger, Shiva, brought to life on the show by a mixture of animatronics and digital effects. Before production began on season seven, longtime series director and visual effects mastermind Greg Nicotero told media outlets about bringing the tiger onto the show: “I’m very confident in the path that we’ve chosen in terms of how we’re going to execute that.”

7. What’s next for Rick Grimes and company?

Once again, it’s worth acknowledging how often the show deviates from the comic book source material, at least in terms of individual moments. In terms of the larger spine of the story, both the show and comics tend to follow similar arcs. Both versions of The Walking Dead spent varying amounts of time in Atlanta, on Hershel’s farm, in the belly of the prison and Woodbury conflict, a skirmish with cannibals, the arrival at Alexandria, and the major confrontation against Negan. We already know that AMC has already renewed The Walking Dead for an eighth season so get ready for another roller coaster season.