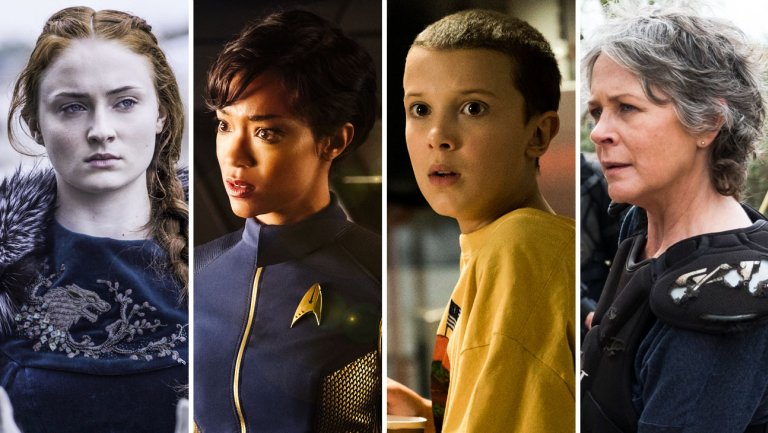 Comic-Con can easily become overwhelming if it’s your first time, or even if you’ve been here numerous times! There are so many panels to check out and things to see, that it seems impossible to get everything all done in just a few days.

To help you wade through those endless number of panels, we’ve laid out the ones you absolutely must check out below.

Westworld (Saturday 4:15-5:15 p.m., Hall H) Now that the show is a proved hit, could the cast and creators of HBO’s Emmy darling Westworld offer a tease about the highly anticipated Samurai World? Or will spoiler-phobe Jonathan Nolan keep the cast tight-lipped about the mysteries of its sophomore drama? Still, expect a lively discussion from stars including Ed Harris (the Man in Black), James Marsden (Teddy), Thandie Newton (Maeve), Evan Rachel Wood (Dolores) and Jeffrey Wright (Bernard/Arnold), among others, in a panel moderated by Reggie Watts.

The Walking Dead (Friday, 12:15-1:15 p.m., Hall H) In keeping with the show’s annual SDCC tradition, the cast and creators of AMC’s zombie drama will debut the season-eight trailer and announce a premiere date. And given the timing, expect exec producers including Robert Kirkman and Greg Nicotero to pay tribute to the late George Romero and, possibly, lead the cast in a moment of silence for late stuntman John Bernecker. Set to appear are stars including Andrew Lincoln, Norman Reedus, Jeffrey Dean Morgan, Lauren Cohan, Danai Gurira and Melissa McBride, among others. (We’ll miss you, Steven Yeun, Michael Cudlitz and Sonequa Martin-Green.)

Timeless (Thursday, 3:30-4:30 p.m., Room 6BCF) How does a show get canceled and renewed in less than a week? A very vocal fan base. While production on season two of the NBC drama hasn’t even begun, stars Abigail Spencer, Matt Lanter and more join creators Shawn Ryan and Eric Kripke to say thank you the right way: in person. (And maybe Ryan and Kripke will outline some broad strokes about season two.)

Star Trek Discovery (Saturday, 2:30-3:15 p.m., Ballroom 20) Welcome back Sonequa Martin-Green! The actress moves from The Walking Dead to the CBS All Access drama as the cast and producers make their debut at Comic-Con — without former showrunner Bryan Fuller, who exited months ago. Following multiple production delays, will the drama — launching in the fall on CBS before moving exclusively to its digital platform — offer another trailer or screen something more substantial? Here’s hoping it’s more footage than this lackluster trailer. Still, a seal of approval from the Trekkie-filled ballroom will go a long way as the series faces its biggest mission yet. Guest star Rainn Wilson moderates.

Once Upon a Time (Saturday, 10-10:45 a.m., Ballroom 20) The rebooted ABC fairy tale drama brings superfan Yvette Nicole Brown to moderate a panel with producers Edward Kitsis and Adam Horowitz with what’s expected to be the Comic-Con debut for a handful of new cast members. (And yes, we’re expecting some familiar faces to be there, too.)

Marvel TV (Legion and Inhumans: Thursday, 5-7:15 p.m., Ballroom 20; The Gifted and Defenders: Friday, 3:45-4:45 p.m. and 5-6:15 p.m., Ballroom 20) With several new series debuting in the coming months, the comic book company looks to make a big splash at the annual convention with panels for Netflix’s The Defenders,ABC’s Inhumans and Fox’s The Gifted and season two of the X-Men-inspired FX drama Legion. In addition to offering a sneak peek at the series premiere, The Gifted will release a new trailer. Meanwhile, Legion may make some news at it’s first-ever San Diego Comic-Con panel.

DC TV (Saturday, 3:30-6:30 p.m., Ballroom 20) As the DC Universe expands again with the upcoming addition of black superhero drama Black Lightning, The CW‘s entire team of vigilantes will, again, touch down at Comic-Con to tout their upcoming seasons. Expect casting announcements at the panels for Arrow, The Flash, Supergirl and Legends of Tomorrow and (potentially) Lightning as well.

“Westworld” comes alive this week at Comic-Con, but the fans who visit will have to make the ultimate choice: white hat or black? (Watch the exclusive LA Times video above to see which one this reporter picked.)

HBO’s immersive, theatrical, and 21+ only “Westworld: The Experience” runs Thursday through Saturday here at the San Diego pop culture confab, offering treats far more intimate than the deluge of marketing that lines every square inch of Comic-Con.

A limited number of fans will have the chance to visit “Westworld” this week at the Comic-Con activation, located just outside the convention center, which runs about 30 minutes long and in small groups of only a half dozen guests at a time.

Greeted by two hosts dressed all in white, guests are first led through the Delos Destination offices and into a slick gallery stocked with costumes, props, and weapons.

“I like things that I can easily conceal,” our hostess offered with a smile. “Because we all have secrets.”

As you enter the personality assessment area, you are told to ignore a door marked “Research and Development.” The door also happens to bear a logo that looks like “SW,” most likely a nod to the Samurai World that was briefly teased at the end of Season 1.

After a brief (and surprisingly accurate) personality assessment, a Delos employee decides whether you should receive a white hat or a black hat. With your new hat in hand, you are taken down a dark hallway where you are prompted to watch a brief introductory video, similar to the one first-time attendees watch on the show, though this one features quite a bit more blood.

You head down a hallway lined with the ghoulish heads of Ford’s previous models and into your own one-on-one personality assessment session. It’s meant to determine just what sort of “Westworld” experience it is you’ve come to find, but like the sorting hat at Hogwarts, the decision has serious consequences.

Even before you get to “Westworld,” it’s a dream come true for fans of the show. Easter eggs teasing the upcoming second season are planted throughout the space. Guests have the chance to interact with several of the park’s “hosts” and staff as they’re transported to Sweetwater to sip handcrafted libations in the Mariposa Saloon.

And at times, it’s also just as nightmarish as you’d expect. Keep your eyes open at all times and you might get a surprise or two, some stimulating conversation with the bar’s resident hostess (our fave topics: consciousness and robots) — even a glimpse of the Man in Black.

Appointments will be taken in the lobby of the Hilton San Diego Bayfront on Thursday, Friday, and Saturday starting at 9:30 a.m., and the experience runs through Sunday. If you can’t get it, don’t forget to check out the Westworld panel on Saturday in Hall H at 4:15 p.m. PT and then those autograph signings at the Warner Bros. booth on the convention floor right around 6 p.m. PT.