“Today, we announced that Windows Holographic is coming to devices of all shapes and sizes from fully immersive virtual reality to fully untethered holographic computing. Today we invited our OEM, ODM, and hardware partners to build PCs, displays, accessories and mixed reality devices with the Windows Holographic platform.”

So by the time that the Hololens and Windows Holographic comes out, it comes out in a big way, that is, if everyone Microsoft invited to the party comes in well-dressed. It would be awesome for everyone else to be into Microsoft’s promising Windows Holographic technology. Those invited include Intel, AMD, Qualcomm, Asus, Acer, Dell, HP, Lenovo, MSI and HTC. It was the HTC Vive featured in the Hololens commercial they showed at Computex. It was quite surprising to see the girl using the Hololens contact the HTC Vive gamer while he was playing a game via Clippy-like AI assistants reminiscent of Skeetz, the robotic companion of the DC superhero Booster Gold. Such an AI app in itself would be amazing, especially for the lonely worker out in the field. Wouldn’t it be great to have an AI smarter than Siri, Cortana and Alexa combined? However, it would look real awkward walking around the office talking to thin air. The only indicator that you haven’t regressed to your seven-year-old self is the hololens headset.

The commercial showed the HTC Vive guy as a polygon figure amidst the realistic representation of other Hololens users. The HTC Vive guy sees everyone else in the same polygon mode. Whatever the representation, it would be amazing to allow VR headsets initially designed for entertainment to be used in business applications. To allow them to collaborate with other workers on certain projects in what it calls Mixed Reality where VR users can also see what Hololens users see and even call up Windows Holographic commands. It’s reminiscent of Microsoft giving Apple II users business clout through its SoftCard add-on. This time, Microsoft is sharing its Windows Holographic APIs to other tech players to allow them to design collaborative business and communication apps into their own VR platforms. The presentation also shows the potential of the technology to break down language barriers between users through real-time translation. The supervisor got the request for assistance in another language and translated speech bubbles appeared when the Japanese boss began talking. 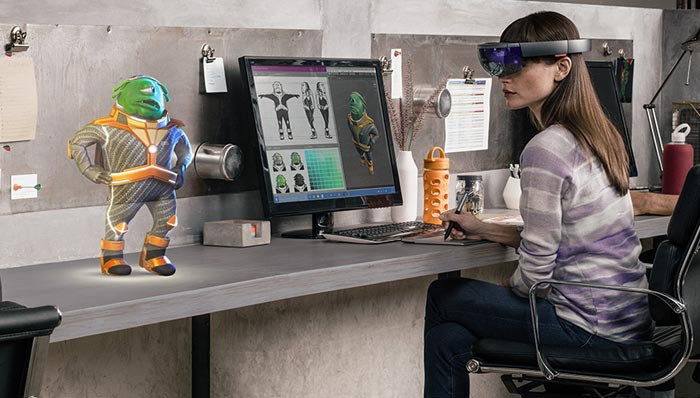 But let’s not take Microsoft’s presentation literally as those apps aren’t really available yet. The presentation is also highly theoretical but very inspiring, to say the least. There’s great potential in this project if Microsoft doesn’t screw it up or let it go if it doesn’t turn out to be profitable. It’s still too early to speculate on Microsoft’s plans on Windows Holographic. It’s a different beast than Windows Phone with different management. Even though it’s not out yet, it may be the best implementation of VR/AR technology out there and could really change the future of computing.

“The big news in our presentation today was a look forward to the future of computing, where the physical and virtual worlds intersect in all new ways and create further scale for the Windows platform.”

While Microsoft seems sincere in sharing the Windows Holographic experience, which theoretically will allow workers to collaborate using different headsets and even transform one’s living room into an interactive game without the Hololens, The company may be positioning itself to profit from what’s already out there, namely the HTC Vive and Oculus Rift. Facebook, which owns Oculus Rift, is not named as a partner, but it may just be a matter of time. It’s very smart of Microsoft to recognize the potential proliferation of virtual headsets by 2020. It’s also a very smart move which actually benefits the other players involved.

Microsoft Holographic technology is already being used by companies such as Volvo, Lowe’s and NASA through functioning Hololens units. They could expand their AR operations cheaply by taking advantage or Microsoft’s Mixed Reality initiative by purchasing cheaper HTC VR headsets and developing apps in-house.