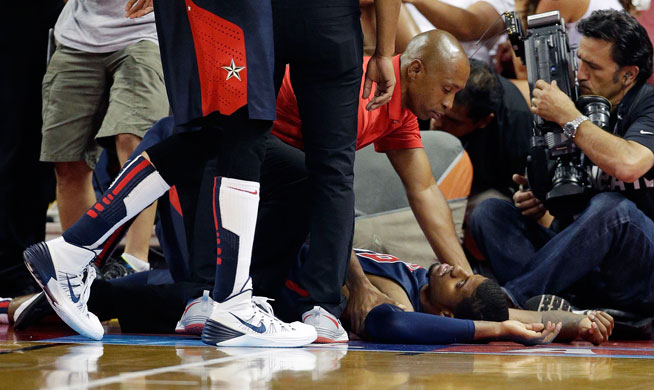 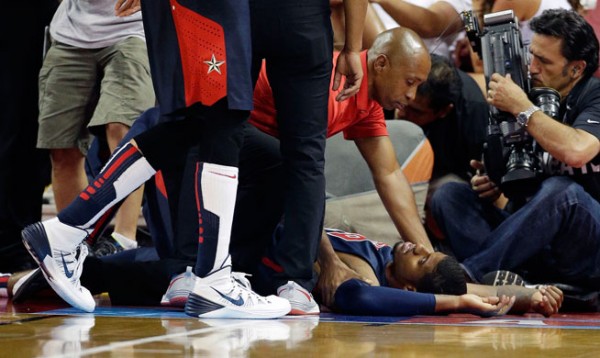 When LeBron James announced that he would be leaving the Miami Heat to return home and play for the Cleveland Cavaliers, everyone immediately assumed that the Indiana Pacers would have no problem winning the Eastern Conference Championship. The Heat have been sort of a road block for the Pacers in recent years: the Heat have knocked the Pacers out of the playoffs in each of the last three seasons. In the past two seasons, both of these eliminations came at the hands of the Heat in the Eastern Conference Finals. However, the Heat lost the best player in the world this offseason, so 2015 should be the Pacers year, right?

The Pacers have been playing exceptionally well the past two seasons, even finishing first place in the Eastern Conference this past season over the Heat. The Pacers have been succeeding thanks to many combined efforts all led by the scoring of super star Paul George. Since being drafted to the Pacers with the 10th overall pick in the 2010 NBA Draft, George has improved drastically every single season in the league. This past season George averaged over 21 points per game while leading the team to 56 regular season victories in 80 games played. George may not be the NBA Scoring Champion, but he provides the clutch shooting and leadership the Pacers need.

George may not be the most experienced player on the team, but he leads like a veteran. The only other player on the team who is respected as much as George is David West. West is entering his 12th season in the NBA; and his résumé of leadership dates back to his years with the New Orleans Hornets when, along with the young Chris Paul, West led the Hornets to multiple playoff appearances. Last season West averaged 14 points and almost seven rebounds per game—he was not the Pacers top scorer; but he is still a vital part of the team.

The Pacers also received big contributions from other players, like their center Roy Hibbert. Although Hibbert is widely considered to be an overrated player, he is still a huge part of the Pacers multiple wins this season—especially on the defensive side of the ball. Hibbert averaged 10.8 points and 6.6 rebounds per game, which is definitely low for a 7’2 center. Hibbert’s biggest contribution is his defensive presence: his size alone intimidates opponents and prevents them from driving against him. Hibbert also averaged 2.25 blocks per game, fourth most in the NBA this past season; so even brave opponents often found themselves stuffed at the rim by the big man.

Other key contributors on the Pacers this season included George Hill and Luis Scola. Hill added another 10.3 points per game, and Scola averaged 7.6 points and 4.8 rebounds per game coming off the bench. Scola is another highly respected player on the Pacers—although he is not the best player, he still gets out there and hustles for points and rebounds every night. Scola is also very consistent in that he very rarely misses a game. In his seven years in the NBA, Scola has missed only eight games; he has not missed a game since the 2010-2011 season.

The Pacers seemed to have it all going their way and were right on track to at least another Eastern Conference Finals appearance…until tragedy struck. With 9:33 left in the USA Blue vs. White Basketball Showcase, Paul George jumped after James Harden’s lay-up attempt and broke his leg on the landing. George suffered the same sort of freak accident that Louisville’s Kevin Ware suffered last season, a normal play that went horribly wrong. Following George’s injury, the game was called and the future of NBA players participating in USA Basketball came under immense scrutiny. George has already been ruled out for the entire 2014-2015 NBA season. It will be about three months before George is able to put any weight on his leg, and it will also be able that long until doctors are able to tell the full extent to which the injury will affect George’s play. George’s leg could take anywhere from six to 12 months to heal enough for him to return to the court, but either way the Pacers will not be risking the 24 year old’s career for one season.

Without George the Pacers will be lucky to make the playoffs. They have enough talent to do so, but unless players like Hibbert can really step up on the offensive side of the ball the Pacers will struggle tremendously. David West will be able to provide the veteran leadership that the team desperately needs in a time like this, but even that will only go so far. George’s injury has essentially knocked the Pacers right out of championship contention, so do not expect much from the team without their young super star.