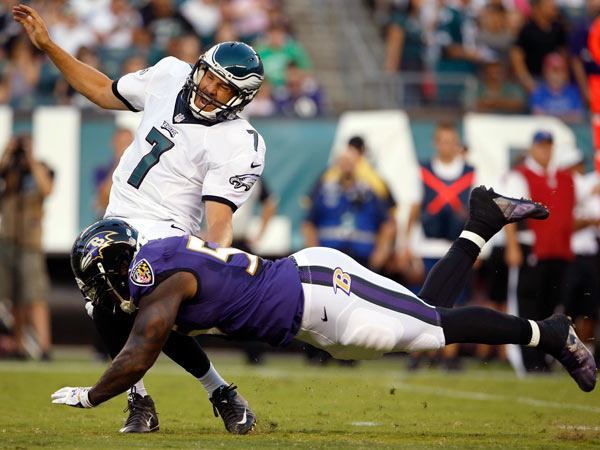 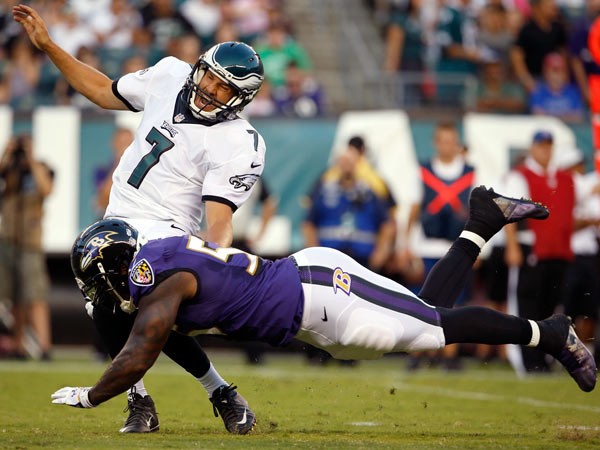 Terrell Suggs had every right to hit the Philadelphia Eagles‘ Sam Bradford on the play that drew a 15 yard penalty on T Sizzle. Hitting him was justified. The hit at the knees was the problem.

The breakdown of the play is simple. Bradford hands the ball off in what could have been a fake during the read option. Suggs lowers his head and dives at the QB just in case he still has the ball and is ready to pass.

I’m all for protecting NFL quarterbacks. I don’t want them getting wrecked by 280 pound defensive ends. That results in seeing backups in NFL games. We don’t need that for a series, a quarter, or heaven forbid an entire season. Protecting the quarterback is job one in the NFL. I wish these guys could have full time body guards off the field just in case. 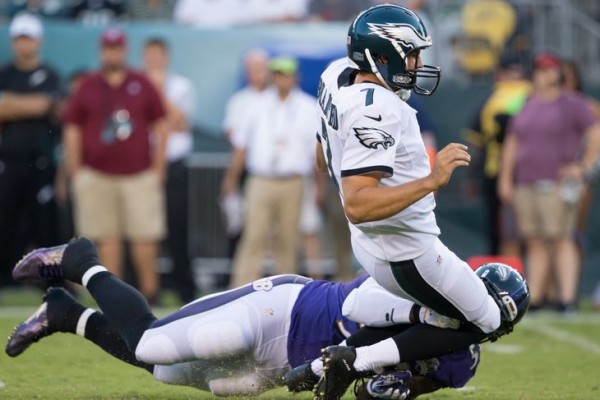 I am also for hardnosed football so I am going to defend Terrell Suggs on his low blow on Sam Bradford. Actually the low part was a bit dirty. Ok, more than a bit. A hit in the allowed part of the torso would have been fine. It probably draws a flag also, but the Ravens would have had a better case for acting offended by the ref’s yellow laundry.

Suggs had this to say about the hit. “When you run the read option, you have to know the rules,” Suggs said, via The Baltimore Sun. “If you want to run the read option with your starting quarterback that’s had two knee surgeries, that’s on you. That’s not my responsibility to update you on the rule.”

What is Suggs supposed to do in this situation? Just ignore the fact that the quarterback may be opting to keep the football instead of handing it off? If he does that then Bradford is free to sit back with no worries of being hit after the read. If that’s the case, NFL teams should fake a hand off on every single passing play. That would give the QB extra time as the defenders are forced to NFL reither hit the running back (acceptable in the NFL), or wait until it’s obvious the quarterback still has the ball.

Taking a look at the NFL rule book on protecting the passer we find this: “No defensive player who has an unrestricted path to the quarterback may hit him flagrantly in the area of the knee(s) or below when approaching in any direction.” With that rule, Terrell Suggs doesn’t have a leg to stand on (neither will Bradford if he continues to get his knees jacked).

So we all agree that the low hit is dirty, unless you are a Ravens fan of course. But the point by Suggs still stands. The defender can’t be to blame for hitting the Eagles’ QB if he is tricked as to who has the football. The read option involves faking a hand off when appropriate. That’s trickery.

These defensive guys have to make split second decisions on who to hit. It’s just as likely that the quarterback still has the ball as it is the tailback took the hand off. In my opinion it’s the coach’s fault if their QB takes an unnecessary hit. The coach designed the play to make it look like it might be a pass after all. Defenders are there to defend. That means that whoever the ball carrier is will get hit. Don’t make it look like your most valuable player has the ball if you don’t want him touched.

That’s the problem. Not for those who love to see 80 point games, but for pure football fans. Offenses are always going to be given the benefit of the doubt. The League wants scoring and lots of it. Defensive players have to keep evolving just to keep up.

That’s all Suggs was doing. He likely knew Bradford didn’t have the ball when he leaped at his knees. But he also knew he could argue that he felt like Sam Bradford had the ball ready to throw a pass. I imagine this argument was discussed with his coaches during practice since John Harbaugh argued vehemently just as soon as the flag dropped. The flag was no big deal in an exhibition game. The Ravens may have just wanted to prove a point going forward about a quarterback on any kind of option play.

Even if Suggs and the Ravens have some moral ground, it matters not. The NFL is going to protect the quarterback. That’s the number one priority out of all the on the field issues.

I have no idea how defenses can hope to disrupt the quarterback as the rules get tighter and tighter. Soon it may come to ignoring the chance to get hits on the passer at all, and instead focus on blocking his throwing lanes. I’m not Dick LeBeau so I don’t have all the answers for NFL defenses.

All I know is D’s best evolve faster. Hitting the quarterback, even when you think he still has the ball is going the way of the Notre Dame Box.