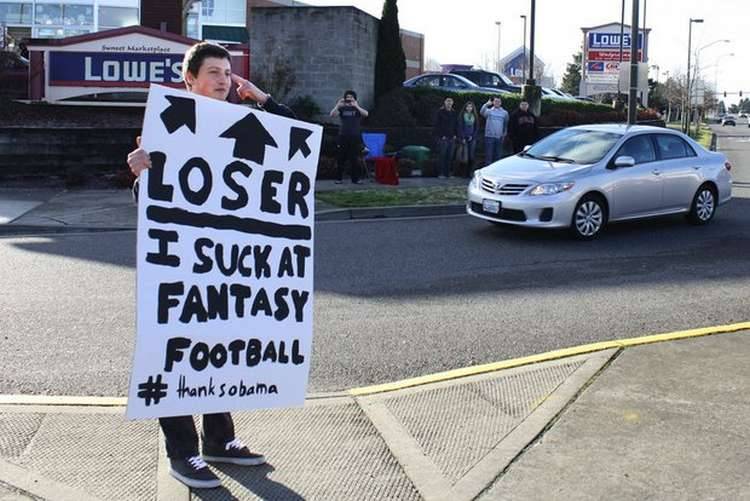 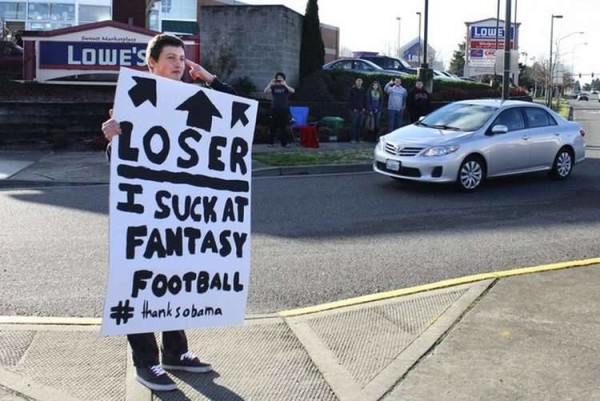 I inched my way closer to daily fantasy football bankruptcy this week. I went into week six with lots of pressure, to fail. I only had five more weeks to prove I could waste $100 on DraftKings with nothing to show for it.

Week six was going to be big.

I doubled my money in week five. So back to back winning weeks could have made it look like I was an expert at this stuff. That’s a message I had no intention of sending to the masses looking to me to make all the wrong roster moves, game after game.

If you’re paying attention, you know I have doubled my money twice, so there is no way to lose the entire $100 I set aside at the beginning unless I risk more in week ten. We’ll wait and see how I feel about that when the time comes.

I might decide to just light that extra $20 or $30 on fire instead.

Take a gander at my losses this week. You can see I won only one contest, an H2H. I risked a dollar in that one and won back my dollar plus another .80 cents….DraftKings got their 10%. 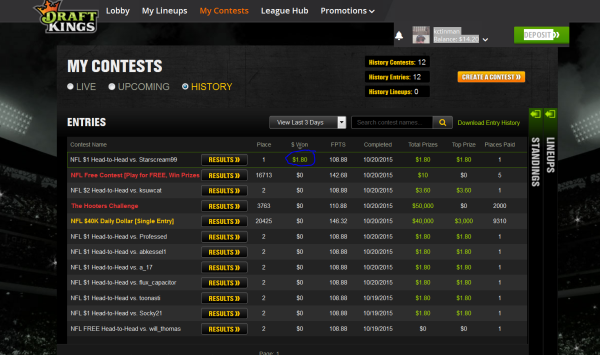 Pretty pathetic , I know, but at least you all can learn from my poor draft choices that gained me just 108.88 fantasy points. And yes that was my real total. I’m sure a third grader could have done better this week and maybe there was a middle schooler who whipped me H2H for all I know.

I used the exact same lineup for all my head to head contests. I figured that would keep me from winning $2 here and losing $3 there. All or nothing for high rollers like myself. See the so called team below. 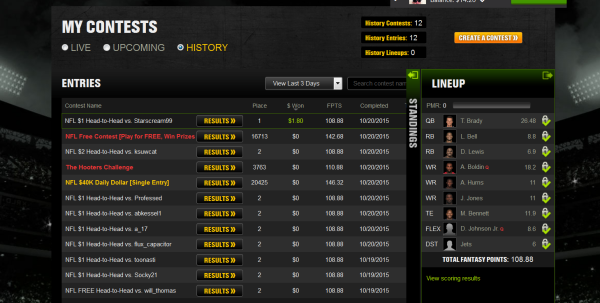 Brady was my highest scorer and I will take 25 points from my QB in any cash game like a H2H or 50/50. Alas all my other players were mediocre except Boldin who was respectable with 18 points on his lower salary.

Duke Johnson was a good thought except he was up against Denver’s tough defense.

Le’Veon Bell could not get going because Arizona stacked the box to stop him since Mike Vick was not a threat. He of one yard passing in a half.

I put a lot of thought into my defense this week. The Jets should have been a great play against Kirk Cousins who throws more picks than Neil O’Donnell after receiving a lump sum payment prior to a Super Bowl.

They netted me six points. Not awful, but a far cry from Miami’s big day on “D.”

I did enter one GPP with a different lineup along with a couple of freebies, including the Hooters deal. See below. 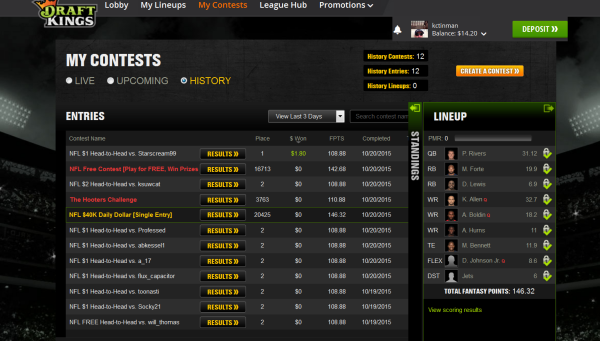 I actually picked a great stack with Philip Rivers and Keenan Allen, who had 63.82 points combined. I was pleased with that but not with the single digit efforts of the Jets and Dion Lewis.

Had I made room for Devonta Freeman in this contest I may have been in the money. Not easy to fit him now that his price tag has gone up steadily since everyone figured out he is not a fluke.

This upcoming week my ten bucks will be split between five GPP contests and five H2Hs. I am going to use Fantasy Labs for the GPP games and a couple head to heads. I will go with general info from other expert sites for the other three H2H matches.

As I was making more notes on this week’s fantasy lineups, I notice my handwriting getting sloppier and sloppier. I imagine this is how Kevin Spacey’s serial killer character in the film “Seven” evolved into a psycho.

He probably started out with too much going on in his everyday life. Began writing in his journal to relieve stress then things just got sideways as he let his mind run away from him.

I don’t see me kidnapping Jay Glazer and leaving him locked in a filthy apartment with Christmas tree air fresheners just to get some fantasy insight.

And I doubt I would force Andy Reid to eat a plate of spaghetti until his stomach exploded just to make sure the Chiefs scored even fewer points next Sunday to boost my DK points.

I can see daily fantasy football taking me for a turn for the worse though. Right now I just feel unorganized with slips of paper that are barely legible. Then there are sticky notes alongside grocery lists that detail Vegas point spreads for week seven.

What I’m saying is that daily fantasy football has got me twisted up. Hopefully, it does not make me slice off my own fingerprints to cover up some awful crimes against Devonta Freeman once I finally start trusting him weekly only to have him disappear from the leader board on DraftKings.

Whew…feel like I blacked out for a minute. Whatever. On to week seven, I’ve got $10 burning a hole in my pocket.