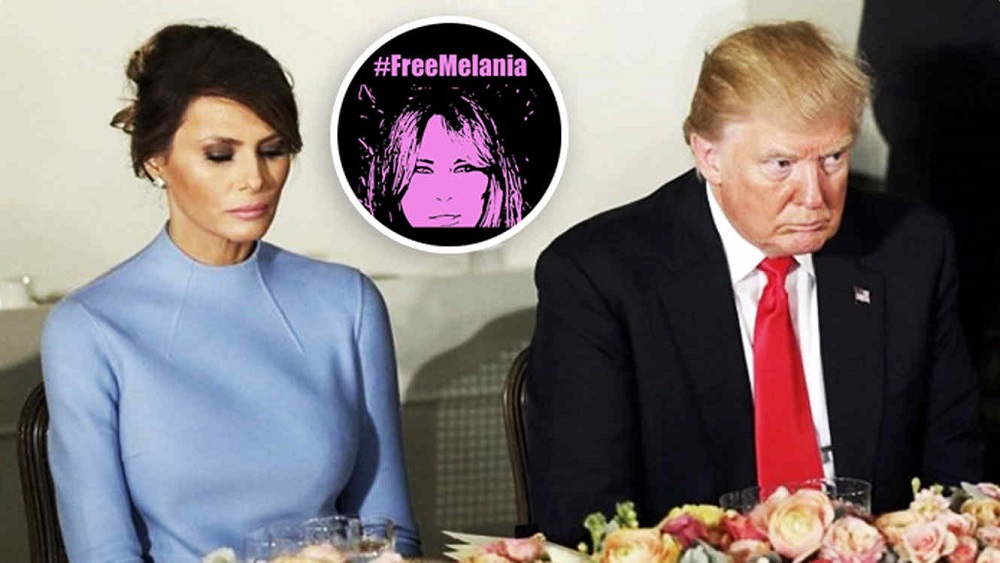 Why are people calling for the “freeing” of Melania Trump? As far as I am concerned, this woman knew what she was getting into when she married Donald Trump. Honestly, amongt the many things that could have happened, sitting pretty in the position of a seemingly abandoned wife is just one of the many hats she now wears.

Or at least that title is what the Internet and simpletons want to believe and tout about the former “model.” After her husband’s clear neglect of her during his inaugural proceedings last week, memes, stories, hashtags and sympathies have circled the blogosphere, and social media concerning her assumed “sad” treatment. From there, a whole story of how she must live in the shadows of her husband have taken on a life of itself. The notion that Melania Trump is in some kind of danger from which she needs saving is so absurd it’s offensive to the countless women who actually do. There is no way in hell you can convince me that she doesn’t want to be right where she is. She may have looked uncomfortable in every way on inauguration day, but when it comes down to it, I firmly believe that she is relishing in her new role as first lady of the United States, because, ya know, she’s first lady of the freaking United States.

My issue with this whole #freemelania nonsense, aside from the fact that it is totally ludicrous, is that a lot of it is coming from Trump dissidents. The people who hate her husband have posted condolences and empathy for her like she is trapped and can’t get out of this thing she’s been in for at least the last 12 years. I’ve seen everything from “That poor thing” to “She needs our support.” What a load of crap. How can those who vehemently despise and resist Trump’s presidency think that his wife is a lone Stepford wife who acts like everything is okay during the day only to cry her eyes out in the shadows of darkness in the privacy of her isolated chamber. Melania has been just as instrumental in creating the train wreck that is the new president of this country as the man himself. Again, I repeat, I do not believe that this woman is in need of any kind of rescue because you can’t make a person leave a situation from which they continually benefit.

Mrs. Trump is perhaps shy and reserved, and there is nothing wrong with that, but the idea that she is not her own woman or that Donald Trump uses her solely for the purposes of eye candy is nativity at its finest. In fact, with all the chaos going on right now in and around the White House, the call for her freedom is probably a welcomed positive for this administration. But it is just a smoke screen for the real, scary things her husband and his team are doing that affect everything from the economics to the national security of this country. People don’t feel safe, individuals are losing their health benefits, government job offers are being rescinded, and folks are worried about getting Melania to safety? Spare me the fake drama!

In all of this, I think about Michelle Obama and the stark contrast of how she was treated during her time in the White House to how Melania is viewed right now. Michelle’s reputation was and remains impeccable. She is Ivy League educated and a loving mother who cares not only about the advancement of her children but also about the advancement of all children. She stood by her husband’s side and worked with him to make America a better place and what did she get? Hateful, ugly mentions simply because she is black. Lord forbid that she started her White House residency with Melania’s reputation. She would not have ever been able to show her face in all the eight years of her husband’s presidency. The double standard in how these two women are regarded is what disgusts and upsets me the most.

Melania Trump has been an enabler of Donald Trump’s antics. She claims that she does not know the man who likes to grab women by the pussy, who thinks his daughter is a nice piece of ass and who made fun of a disabled reporter. I do not believe her. She actually may be the creator of the whole “alternative facts” notion because as much as she’s faced with the cruel realities about her husband, she has clearly chosen to rebrand what he continues to do into acceptable behaviors that she can live with everyday.

This woman is no fool, and for whatever reason, people are sorely underestimating who she is and the power she possesses. Melania Trump is not the one who needs freeing from the claws of Donald Trump. America is.