The #MeToo movement has begun reaching into the world of professional football. It began Monday when NFL Network suspended Hall of Fame running back Marshall Faulk, along with multiple other former players turned analysts, including Ike Taylor, Heath Evans, and Warren Sapp. All four members of the NFL Network crew remain suspended as the network and courts continue to investigate claims in the lawsuit by Jami Cantor that she was sexually harassed by former NFL players working for the network, including the four above players and Donovan McNabb and Eric Davis.

Cantor’s lawyer applauded her bravery in coming out against big-name male athletes.

“I think Jami Cantor is a very courageous woman, as all women coming forward in this #MeToo movement,” said Laura Horton, Cantor’s lawyer. “All these women are courageous. These women have had the courage to step up knowing that, in the past at least, it would be a ‘he said, she said’ situation until we’ve had this national conversation.”

The allegations that have gotten the former NFL players in trouble are involved in a civil trial by Cantor claiming sexual harassment among other things, including age and sex discrimination, a hostile work environment, wrongful termination, and defamation. Clearly, she isn’t happy with the way her time with the NFL Network played out.

One of the players, however, isn’t taking the accusations sitting down. While on a much smaller scale, Warren Sapp is not happy to be treated the same way as Harvey Weinstein (losing his job and public humiliation) for something that he feels never happened, in his opinion. Sapp, the Hall of Fame defensive lineman, admits to giving Cantor sex toys for Secret Santa and messing around with her, but he hardly understands where the actual harassment occurred.

“I’m still trying to figure out where’s the sexual harassment?” said Sapp. “I did walk in the bathroom, but I did not urinate in front of her. I didn’t pee in front of my wife, and I was married to her for nine years. It’s just not something you [do]. What is that about? It’s not cute. It’s not sexual. It’s not something you want to see. Last time I checked, if you ate some asparagus, it might stink.”

So, Sapp might need some explanation as to why he lost his job. People are interviewing him and all, and he still doesn’t seem to understand the problem. Sure, there are a lot of variables that go into the situation, and it really is a he said, she said, but right now, she is the only one that’s allowed to say anything, and Sapp is caught on the wrong side of it. 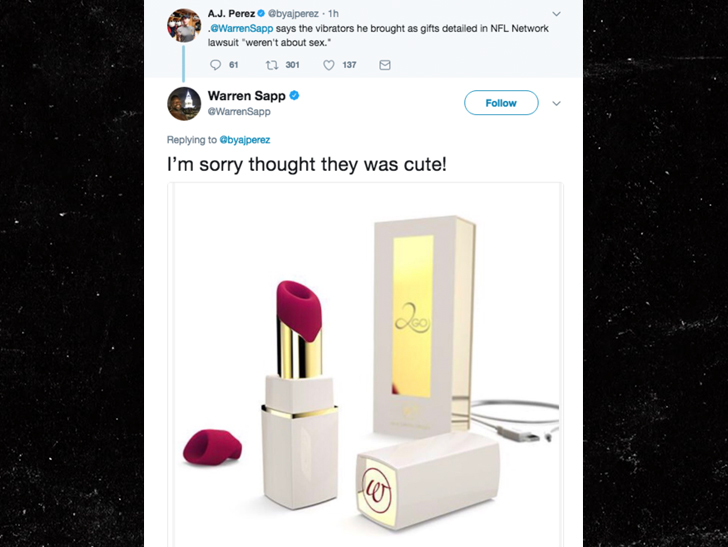 “We were sitting there around Christmas time, and everybody brought a Christmas gift, a little holiday joy for everybody,” said Sapp. “So, my man had made a little novelty thing that looked like mascara, eyeliner, and different things. Little toys for ladies that move around a little bit. I showed them pictures and [the makeup artists] said bring me some, so I brought them some for the makeup ladies.”

And while it would be hard to argue that Sapp and Weinstein are anywhere near the same level, what does Sapp expect? If you get accused of sexual harassment right now, nothing else particularly matters: You will more than likely lose your job and be publicly shamed for the situation.

“Where is the harassment at?” said Sapp. “I’m the notorious one. I’m always the bad guy. That’s why I’m in here today. Ain’t no #metoo, nothing. No sexual harassment. You are not going to put that on me.”

Now, some of the other analysts seem to have engaged in more direct harassment. Faulk, for example, allegedly fondled Cantor’s breasts and groped her behind, becoming more aggressive over time. Ike Taylor, on the same level, allegedly sent naked and exposed photos to Cantor, including a video of himself in the shower, which Cantor has provided to the court. McNabb constantly asked Cantor sexually charged questions, and Evans propositioned Cantor to have sex with him on multiple occasions.

Eric Weinberger, a former executive at NFL Network, is also mentioned in the lawsuit, costing him his current job at The Ringer.

“These are very serious and disturbing allegations that we were made aware of today,” read the company’s statement. “We are placing Eric on leave immediately until we will conduct our own internal investigation.”

So, all in all, multiple people have lost their jobs, and multiple people have been publicly shamed as a result of the lawsuit by Cantor. Now, it is up to the courts to decide how much of Cantor’s stories are actually true. And if they find against the Network, I imagine a lot of these suspensions turn into permanent firings.