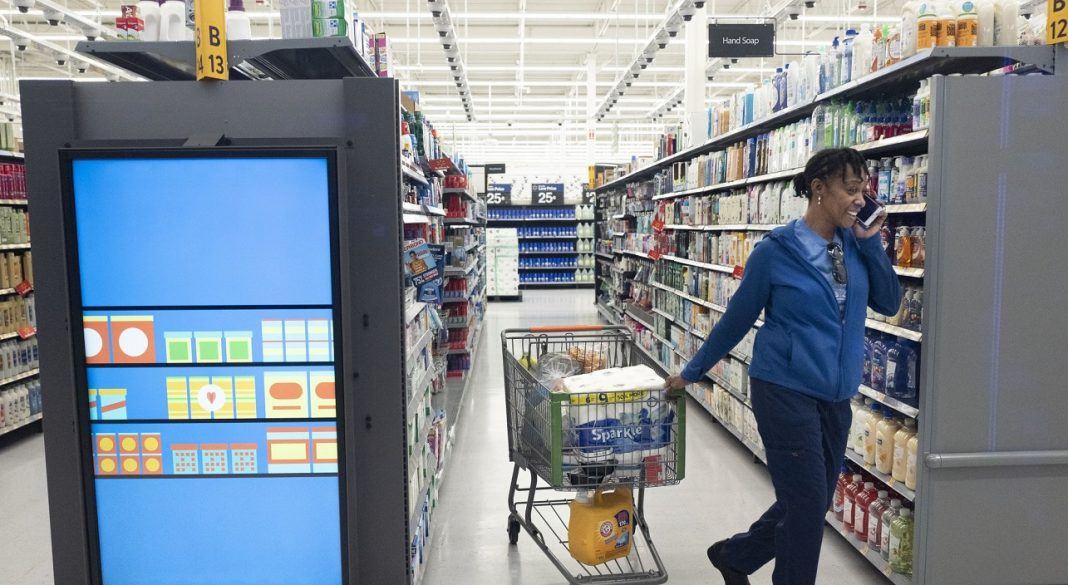 Walmart is jumping in with both feet to beat competitors using AI to better run their stores. It’s a big gamble that will more than likely cost more people jobs while making shareholders very happy. Nokia is admitting that the 5G tech market is going to get tougher as competition builds quickly.

Inside one of Walmart’s busiest Neighborhood Market grocery stores, high-resolution cameras suspended from the ceiling point to a table of bananas. They can tell how ripe the bananas are from their color.

When a banana starts to bruise, the cameras send an alert to a worker. Normally, that task would have relied on the subjective assessment of a human, who likely doesn’t have time to inspect every piece of fruit.

The thousands of cameras are a key feature of the lab, which officially opened inside this 50,000-square-foot store on Thursday. Walmart envisions using them, combined with other technology like sensors on shelves, to monitor the store in real time so its workers can quickly react to replenish products or fix other problems. The technology, shown to media outlets, will also be able to track when shelves need to be restocked or if shopping carts are running low. It can spot spills on the floor and even detect when cash registers need to be opened up before long lines start forming.

Walmart’s deep dive into artificial intelligence in its physical store comes as Amazon raised the stakes in the grocery business with its purchase of Whole Foods Market nearly two years ago.

That’s put more pressure on Walmart and other traditional retailers like Kroger and Albertson’s to pour money into technology in their physical stores. At the same time, they’re trying to keep food prices down and manage expenses. Amazon has been rolling out cashier-less Amazon Go stores, which has shelf sensors that track the 1,000 products on its shelves.

Walmart hopes to start scaling some of the new technology at other stores in the next six months, with an eye toward lowering costs and thus lower prices. As the shopping experience improves, the retailer expects to see higher sales.

“We really like to think of this store as an artificial intelligence factory, a place where we are building these products, experiences, where we are testing and learning,” said Mike Hanrahan, CEO of Walmart’s Intelligent Retail Lab and co-founder of Jet.com, purchased by Walmart three years ago. “If we know in real time everything that’s happening in the store from an inventory and in stock perspective, that really helps us rethink about how we can potentially manage the store.”

Hanrahan says the cameras are programmed to focus primarily on the products and the shelves at this point. They currently do not recognize faces, determine the ethnicity of a person picking up the product or track the movement of shopper, he says. A glass enclosed data center at the back of the store houses nine cooling towers, 100 servers and other computer equipment that processes all the data.

There are signs throughout the store alerting and educating shoppers about how the store is being used as a lab. Still, all the cameras could raise privacy concerns.

“Machine learning fundamentally finds and matches patterns,” says Steven M. Bellovin, professor of computer science at Columbia University and an expert on privacy, who hasn’t seen the new Walmart AI Lab. But he says companies run into trouble where it starts to match the behavior to a specific customer.

Hanrahan says Walmart has made sure to protect shoppers’ privacy and also emphasized that it does not have cameras at the pharmacy, in front of the rest rooms or its employees’ breakrooms.

Walmart’s new living lab marks its second in a physical store. Last year, Walmart’s Sam’s Club opened a 32,000 square foot lab store, the quarter of a size of a typical Sam’s Club store. It’s using the store to test new features surrounding its Scan & Go App, which lets customers scan items as they shop and then buy from their phones, skipping the checkout line.

The retail lab is the third project from Walmart’s new incubation arm, created after the Jet.com acquisition as a way for the discounter to shape the future of retail.

It follows the launch of Jetblack, a shopping by text service aimed at affluent shoppers in New York. Walmart’s second incubation project to launch was Spatial&, a VR tech company. As part of the launch, it’s bringing tractor-trailers to some of Walmart’s parking lots of some of its stores so customer can experience DreamWorks Animation’s “How to Train Your Dragon” through virtual reality.

Hanrahan says the company is embracing the labs in stores because it can better understand the real ways that technology affects customers and workers. It also wants to educate shoppers.

Walmart has made a point to not hide the technology. Small educational kiosks are set up throughout the store. It plans to bring in local schools and communities.

Despite the signs and visible cameras, many shoppers including Marcy Seinberg from Wantagh, New York, didn’t seem to notice or care.

“I am not bothered by it,” Seinberg said. “If technology saves me money, I would be interested.”

Telecoms gear maker Nokia reported Thursday a surprise first-quarter loss amid tougher competition for the new, superfast wireless 5G networks that are expected to increase in business this year.

The company, based in Espoo, Finland, said its net loss for the January-March period was 116 million euros ($130 million), against profit of 83 million euros a year earlier. Sales rose 2% to 5 billion euros.

CEO Rajeev Suri said revenues from the faster but more expensive 5G networks were expected to “grow sharply” in the second half of the year.

He said the slow start to the year was caused by aggressive competition in the network industry – dominated by Nokia, Sweden’s Ericsson and China’s Huawei – in the early stages of 5G rollout. Companies are under pressure to offer low prices to secure 5G network deals.

That, Suri said, had created “near-term pressure but longer-term opportunity.”

Industry observers say Nokia and Ericsson are trying to make gains on the woes of Huawei, which is facing obstacles in many countries over concerns – mainly voiced by the U.S. – that its equipment may be used for China-sponsored state espionage.

In the latest development, Britain’s digital minister said Thursday that London is still mulling over whether to allow Huawei to supply parts for the U.K.’s new 5G wireless network.

There is a risk, experts say, that Nokia and Ericsson could push too hard to capitalize on Huawei’s troubles by engaging in a price war, eroding profits.

“The 5G (market) is in its early stages, the ecosystem is not yet mature and Nokia is facing some new challenges of its own,” Suri told analysts and reporters in a conference call.

“But overall we see things improving quickly and surely. We have a (product) portfolio that is unique for the 5G era. Still, there’s plenty of work to do in all (business) areas but the momentum is with us,” he said.