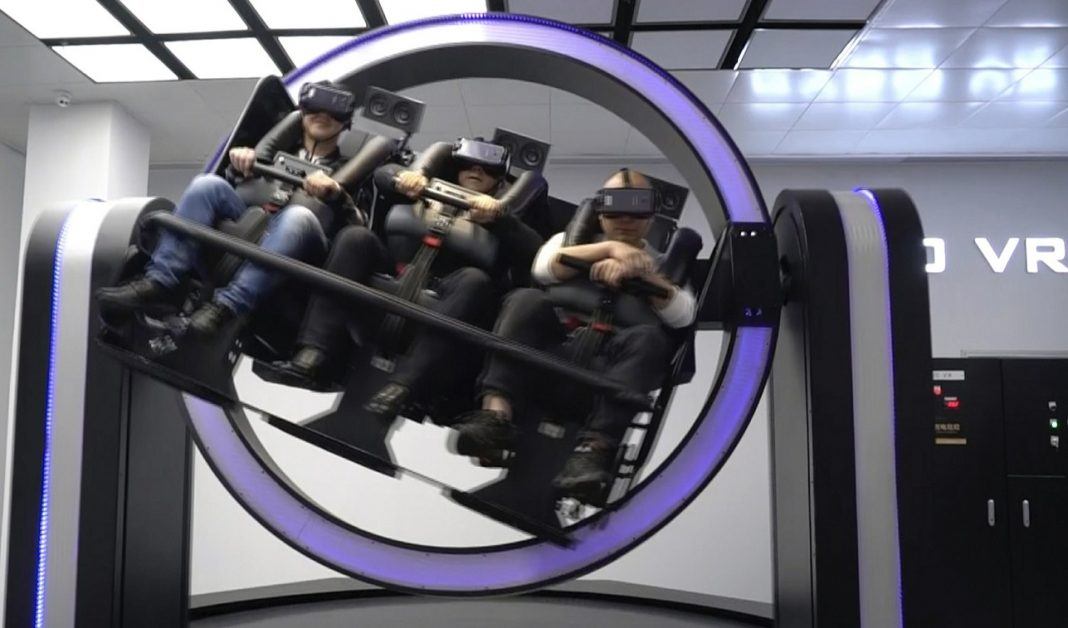 Virtual reality may have all but disappeared from America, but it’s getting a second wind in China with a VR theme park in Nanchang. Facebook has invested heavily in VR with a new $400 headset, but as interest has waned, it’s all but dead in other parts of the world.

Liu Zixing craned his neck forward for help with fastening the goggles for his first ever taste of virtual reality. He took a break from the mining ore business to travel to a VR theme park in this Chinese provincial capital not known for high technology.

“It feels like reality,” Liu said after shooting down robots in a virtual fighter jet, strapped to a spinning gyroscope lit in purple. “It’s just like you’re riding in a plane.”

Enthusiasm for VR has cooled somewhat after years of hype, but China’s leaders are trying to drum up excitement, hoping to take the lead in a technology they expect will eventually gain wide use.

Hoping to coax homegrown entrepreneurs to take the plunge, the government is educating students, subsidizing office spaces, and sponsoring conferences and competitions.

The city of 5.5 million is the capital of Jiangxi province, a relatively impoverished region nestled in the mountains of south-central China, where the regional industries are copper mining and rice.

Officials hope that one day it will be a world-class hub for virtual reality.

“Frankly, VR isn’t 100% necessary in the Chinese market at the moment,” said Xiong Zongming, CEO of IN-UP Technology, one of dozens of firms being incubated by the VR base. “But with the government’s push, many other companies, departments and agencies are more willing to try it out.”

Xiong was born in Nanchang but studied and worked in Japan for nearly a decade before returning to China, where he settled in Shanghai. Nanchang officials enticed him back home with offers of free rent and 150,000 RMB ($22,340) in startup funds, part of an effort to lure back local talent from richer coastal cities to help lift the local economy.

Beijing began its VR drive a few years ago, when slick headsets from Samsung, Oculus, HTC and Sony were making a big splash at electronics shows in the U.S.

Chinese leaders were worried they might miss out on a boom.

VR is included in Beijing’s “Made in China 2025”, an ambitious plan to develop global competitors in cutting edge technologies including electric cars, solar and wind power, and robotics. Nanchang is one of several VR hubs across the country.

So far, VR is mostly a niche product used in gaming and business training, held back by expensive, clunky headsets, a lack of appealing software and other shortcomings. Analysts say it could be many years, perhaps decades, before the technology goes mainstream.

Last year, just 5.8 million VR headsets were sold globally, according to market research firm Ovum. That compares with sales of more than 1.5 billion smartphones and is far fewer than expected when VR fever was at its peak a few years back.

“My experience wasn’t good,” said Xu Xiao, a PC gamer who bought VR goggles over a year ago after graduating from college. “When I wore them, my eyes got dry and uncomfortable, and I got dizzy. I barely use them anymore.”

Stopping by the Nanchang VR park, he was still unimpressed.

“The image quality isn’t refined, and it’s hard to operate,” he said after a virtual flume ride.

Even if it’s a gamble, analysts say China’s state-led push into VR could pay off in the future. Nanchang’s VR developers are marching on despite a wave of layoffs across the industry in the past few years. Thousands attended Nanchang’s first VR conference last October.

“It’s kind of a good move to be there now,” says George Jijiashvili, a senior analyst at Ovum. “It’s a long game, and I don’t think it’s going away anytime soon.”

Beijing still lags behind: Most VR headsets are designed by companies based outside mainland China like Samsung, HTC, and Oculus and the major VR content platforms are run by giants like Facebook and Google.

China’s Ministry of Industry and Information Technology aims to change that by encouraging banks to finance VR startups and directing local governments to invest in VR products for public projects such as schools and tourist sites.

The government has provided subsidies and purchases of VR software, mostly focused on education, training, and health care software. Nanchang has a 1 billion RMB ($149 million) VR startup investment fund, and is setting up another fund to attract established VR companies.

Entrepreneurs and experts believe VR will get a boost from next generation, or 5G, technologies where Chinese companies like Huawei Technologies are industry leaders. 5G promises blazing-fast connection speeds that could smooth lags and optimize multiplayer games and livestreaming so VR users might not end up with the headaches some get with today’s technology.

“VR e-sports, broadcasting concerts in VR format, remote surgery — all of this is only realistic in the 5G era,” said Chenyu Cui, a senior analyst at IHS Markit. “It’ll make VR better for a mass audience.”

Since the main commercial market for VR is entertainment, many of China’s VR content makers are game developers in Shenzhen or Beijing. They’re subject to booms and busts and recently, business has been flagging.

The state support is helping to protect Nanchang’s developers from the cycles of feast and famine, but for now the industry is in a lull, and Xiong, the VR entrepreneur, is focused on keeping his startup afloat.

His dream is that one day, China’s bet on VR will turn his thirteen-person company into an industry giant.

“I look forward to the day we can go public,” Xiong said, “and become a role model for the whole province.”