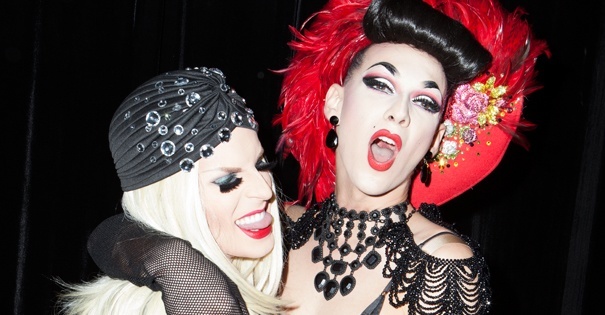 The RuPaul’s Drag Race season finale for season seven took place in a Downtown Los Angeles auditorium. Previously eliminated drag queens from this season appeared at the finale. RuPaul came on stage and brought all the drag queens out at once.

Ginger, Violet and Pearl then had to lip sync songs that were written specifically for each of them. Michelle Visage said Ginger’s performance was great and her co-judges agreed. Ginger then answered questions asked to her by some of the members of the audience in the auditorium. John Waters had recorded a message for Ginger Minj saying he was behind her. Ginger also got a prerecorded message from her dad stating he was proud of her for everything she has accomplished. Ginger said she wanted to be part of the legacy of RuPaul’s Drag Race winners.

Pearl then hit the stage for her lip sync performance and Michelle Visage said when Pearl came into the competition she had an attitude but had become lovable since then. Ross Matthews told Pearl people really liked her and that she had come a long way. Pearl then took questions from the audience as well. She said she wanted people to think she is unique and talented. Pearl also got a prerecorded message from her family telling her they loved her, were proud of her and wished her all the luck in the world. Pearl said if she won the season she would probably buy wigs with the money.

Violet then came onstage for her lip sync performance. Michelle Visage said she loves Violet and Carson said she always presented herself well on stage. She told RuPaul she used to sew her own uniforms when she went to catholic school. She also said she had decided to live her life for her and no one else. Violet then got a congratulatory message from her mother and another one from her father; both said they were proud of her and loved her. Violet said it would mean everything to her if she became the next winner of RuPaul’s Drag Race.

Jasmine said meeting Kennedy was the most important part of the show for her. She also said she was inspired by Patti Labelle. RuPaul then showed Jasmine a video message Labelle recorded just for her.

Mrs. Kasha Davis said she felt the younger girls on the show had a sense of entitlement but that she learned a lot from them. She was then asked about Mr. Kasha Davis, who was pointed out in the audience.

Kandy Ho said she was thinking of moving away from Puerto Rico, where she had lived since she was 10 years old. Jaiydenn said she didn’t realize they would be locked up so much throughout the course of the season. She also said that her mom and brother knew she was a drag queen already but didn’t know she was gay. Jaiydenn then got to watch a video message from her mother who said she loved Jaiydenn based on who she is and not what she does. She said now her family could finally get to know the real Jaiydenn. Miss Fame then had a live chicken brought out on stage after RuPaul asked her if she could speak chicken. Miss Fame said she could because she had grown up on a farm with only chickens to talk to.

Trixie then did an impression of RuPaul right in front of her and was jokingly told to sashay away. Katya said she was terrified through the whole season because RuPaul made her nervous. She also said she had the feeling RuPaul wanted to kill her during the competition. Katya also said the show had given her higher self -esteem than she had before.

Kennedy talked about how she had a rough childhood with her mother but her mother had come to support her in the finale of RuPaul’s Drag Race. RuPaul recommended viewers go see Kennedy in concert if they could. Kennedy was asked who she would nominate to come back to the show for an all- star season and she said Katya.

The season 7 Miss Congeniality Award was presented to Katya; who also won $5,000 as a result and RuPaul thanked everyone for voting. Ginger, Pearl and Violet then reappeared onstage. RuPaul then announced the winner for the season is Violet. Violet took to the stage to thunderous applause and tears of joy from her parents.