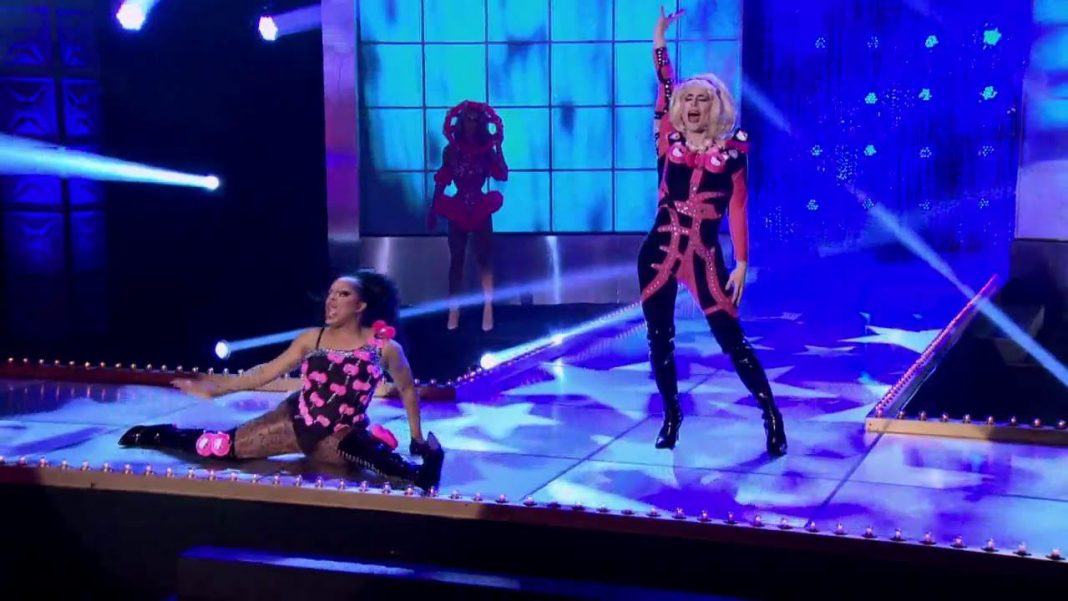 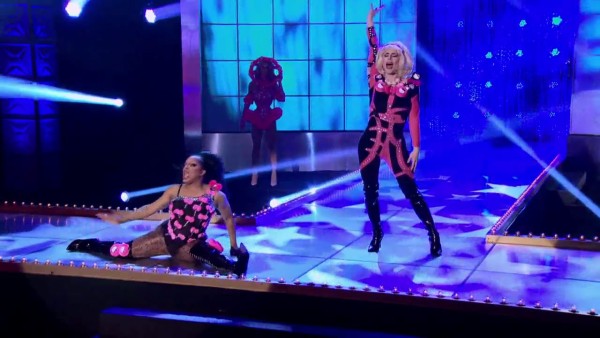 This week’s episode of RuPaul’s Drag Race had Ginger Minj sad and walking into the work room saying it just isn’t the same with Katya gone. She also said the heat was on and it was going to explode.

Violet said it felt awesome to walk into the work room knowing the remaining drag queens are the final four. The drag queens then found out that this week they would have to act out a RuPaul music video. Candi Cayne then came out to work with the drag queens on their choreography. Ginger Minj said the part of the music video making her nervous was the dancing but that she wasn’t going to let it get the best of her this time. Candi Cayne told Violet not to psych herself out while rehearsing for the music video.

RuPaul then asked Kennedy Davenport about auditioning for the show and he said he had kept putting it off until after his father passed away two years ago. She then asked him what winning would mean to him and he said that everything in his life was a struggle and that his sister has struggled with retardation and that winning the show would be a reward to him for taking care of her since their father’s death.

Violet told RuPaul she imagined winning the show as soon as she auditioned for it. RuPaul told Violet she was really special and that others would take their whole life to get where Violet is now.

Pearl told RuPaul she was surprised she became shy during the competition. RuPaul asked Pearl what she was like as a kid. Pearl said she had dealt with mental, physical and psychological torment and that she didn’t open up to other people much. RuPaul told her there had been a huge transformation in her throughout the competition.

While rehearsing for the music video Pearl struggled to succeed. She was having a hard time keeping her wig secure. Violet said she was trying so hard during rehearsal she forget her choreography.

The drag queens then had to film their acting scenes for the music video. They worked with a real director to polish their acting techniques. Pearl said Kennedy was an amazing performer by her biggest weakness was her short term memory. Ginger Minj said Violet was flat lining trying to play her character in the video.

RuPaul then presented the drag queens for the runway walk. Kennedy came out in a multi colored dress and matching shoes. Violet came out dressed in a black pantsuit with a green sleeveless top. Ginger Minj came out in a fringe and rhinestone dress and made sure the judges could see all of it. Pearl was told her outfit looked like it was from the “Dee Snider Intimate Collection.”

RuPaul told Kennedy she had become a fierce drag queen and asked all of the drag queens what they would say to their child self and Kennedy said it was OK to be different than the other kids. Violet’s answer to the question was that she would tell her child self to be more patient with everyone, especially her parents. Ginger Minj’s answer was when it feels like the whole world is against you, you can be a friend to yourself and that throughout life you would have to deal with bigoted people. Pearl’s answer to the question was a warning about entering the toughest years of life.

The judges then gave critiques. Michelle Visage said Ginger Minj’s dancing was good this time. She was also told she performed beautifully in the music video. Ginger Minj was told her characters were the most flushed out and she was praised for handing a wig mishap very well. Pearl was told that she was a weirdo but she pushed herself out of her comfort zone this week. She was told she looked beautiful and Michelle Visage was proud of her. All four drag queens then stated why they should be the one to move on in the competition. Kennedy said she and Ginger were the only ones ready for this competition and that Pearl and Violet didn’t have much to offer. Pearl said she had looked for validation from this show and that her fellow contestants represented the future. Ginger Minj said Violet has the shortest temper she has ever seen. She also criticized Pearl for almost walking away from the competition. Pearl said she busted her butt for everything she has and that she had more to show America.

RuPaul and the other judges then discussed each drag queen. They said Kennedy’s dancing was great and she is a glamorous and hard worker. They said Violet gave it all she got and did some great singing and acting. They said Ginger Minj was an all- around great performer. They said Pearl fought her way through the competition and she had a certain charm.

After the lip sync competition among the remaining four drag queens RuPaul then announced that Kennedy Davenport was being sent home from the competition.