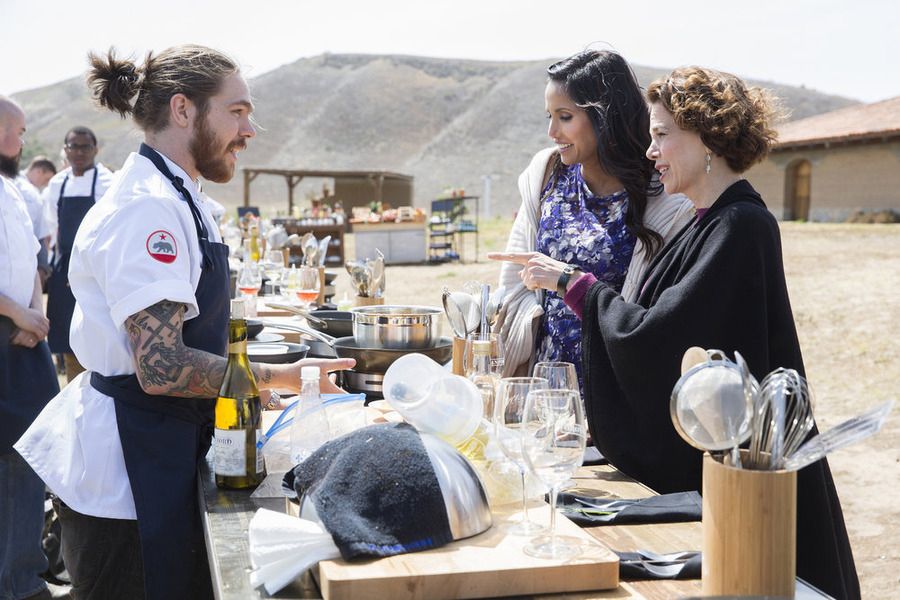 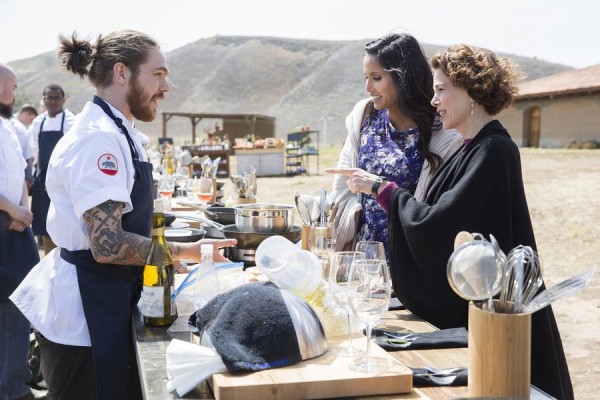 On this week’s episode of “Top Chef California,” Padma told the chefs they were leaving on a road trip in the morning. When they arrived in Santa Barbara, they met Stephanie, an urchin diver. She gave them equipment and sent them to a nearby winery to meet with Padma and the editor of Food & Wine Magazine, Dana. Padma then announced a sudden death quickfire. They had to make an Uni dish that paired with one of the wines made at the estate. Grayson said this was new to her, and she didn’t like it. Chad said when it came to his dish he was winging it as far as making something that would pair with wine; this is because Chad quit drinking a year and a half ago.

Karen made a lemon sour soup with whipped uni, giving it the consistency of egg drop soup. Angelina said she was playing it safe because she’d rather go unnoticed than be on the bottom. The bowls she had to use screwed up Karen’s soup and she was concerned about it.

Dana and Padma said their favorite dishes were by Grayson, Wesley, and Carl. Dana named Grayson the winner of the sudden death quick fire. Grayson said her boyfriend would be excited that she paired her dish and wine so well.

Dana and Padma said their least favorite dishes were by Angelina, Karen and Gisele. She gave all three feedback and then announced Giselle had their least favorite dish of all. Padma told Giselle she could pick one chef to cook against and whichever one made a better dish would be safe from elimination this week. Giselle chose to go against Angelina. Padma then said the two had 25 minutes to cook a dish using ostrich eggs. Angelina said she had never worked with ostrich eggs before. Giselle made soft scrambled eggs and Angelina made ostrich scrambled eggs with vegetables and spicy tomato jam. Dana chose Gisele as the winner.

Padma announced the elimination challenge was to make the ultimate surf & turf dish. Grayson was allowed to work alone but everyone else needed to choose a partner. Padma said whoever won the elimination challenge would come back to the estate and receive their own wine. The chefs were given a chance to choose a protein for their dishes. Then they went shopping for the rest of their ingredients.

Back at the Top Chef kitchen, Tom announced that each pair of chefs would be working against each other. Each pair had to divide up the ingredients they bought and have one chef prepare one dish, and the other chef prepare a different one. Grayson was the only one who got ton choose who she would go up against and whether she would cook surf or turf.

At the Top Chef house, Grayson chose to go up against Wesley and Amar because she wanted to challenge herself. The next day the chefs prepared their elimination challenge dishes.

The judges were then served their dishes. Tom said Amar’s halibut was overcooked. Wesley’s rib eye was called plain and under seasoned. Grayson’s spiced carrot puree was chosen as the winner of the first round. Padma then said Amar and Wesley were up for elimination.

Jeremy’s pan roasted prawns was praised by the judges. Phillip’s rib eye was tasty, but Jeremy won the second round.

Angelina’s marinated mussels wasn’t juicy, and Tom said she tortured the ingredients. Gisele’s quail was praised by the judges and Gisele won the third round, subjecting Angelina to possible elimination.

Kwame’s crab salad was playful and fun, according to Tom. Chad’s spicy bean roasted lamb was cooked perfectly. There was a tie between Kwame’s dish and Chad’s dish, but Tom chose Kwame’s as the winner of the fourth round.

Isaac’s halibut was over cooked but had a good flavor. Carl’s roasted chicken thigh was nicely cooked, according to Tom. Carl was declared the winner of the fifth round.

Marjorie’s dish was supposed to include fish but didn’t because she ran out of time. Karen’s seafood cod and roasted vegetables were praised by the judges. Marjorie’s roasted pork loin was not well liked, so Karen won the sixth round.

Jason’s grilled pork didn’t have enough flavor, according to Tom. Frances made ginger glazed black cod and Tom said her dish was a hodgepodge. It came down to a tie between Frances and Jason. Tom chose Jason as the winner of the seventh round, subjecting Frances to possible elimination.

Tom said he thought the elimination challenge threw some of the chefs off. Padma announced Jeremy, Kwame and Karen had made the judges’ favorite dishes. The three of them got feedback from the judges. Kwame was declared the winner among the three of them. Kwame won his own barrel of wine from the winery.

Padma announced the judges least favorite dishes were made by Frances, Angelina, and Wesley. They also got feedback from the judges and Padma said Frances used too many ingredients in her dish. Padma then announced Frances was going home this week. She then announced Palm Springs was the next stop for this season’s competition.