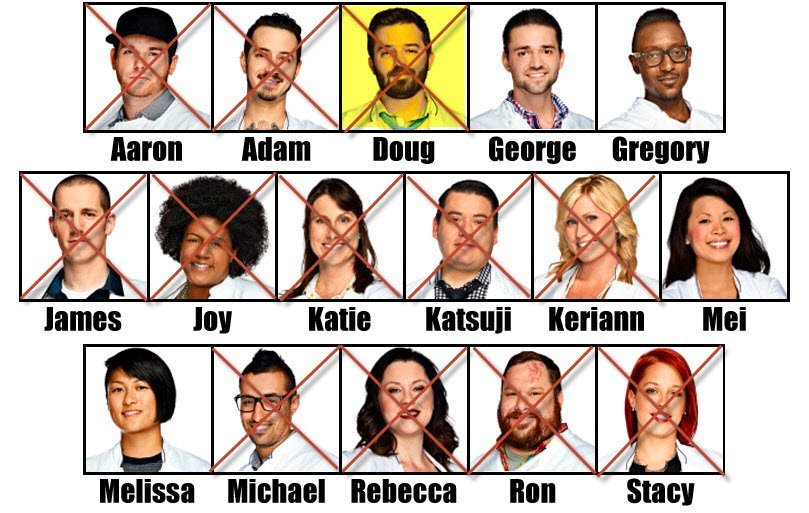 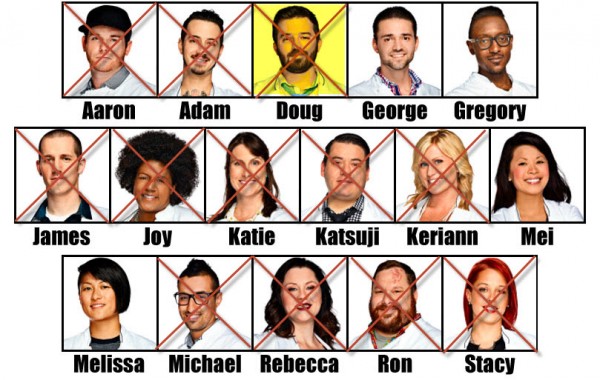 This week on Top Chef Mei and Melissa were shown bonding over their similarities. Bravo host Andy Cohen brought his former college roommate with him to judge this week’s quick fire challenge. The cheftestants were tasked with making their own unique versions of Ramen noodles. All they were provided was the noodles to start with. Local college students were brought in with the ingredients they brought from their dorm rooms and these were the ingredients that needed to be used. Each cheftestant picked a student’s bag of ingredients, which they couldn’t see until after they choose on. The quick fire challenge winner this week walks away with a $5,000 prize. 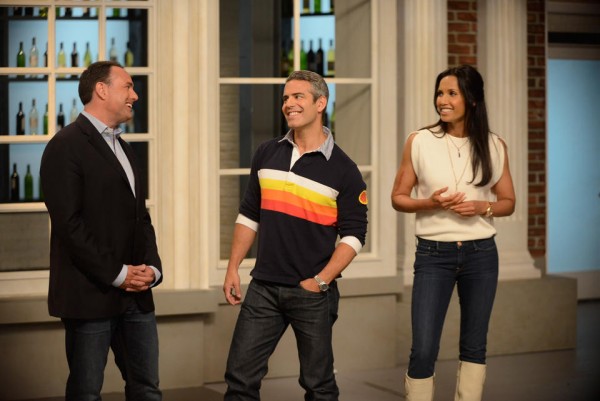 Gregory took pizza toppings to add to this ramen noodle dish. Mae used shrimp and the noodles to make her dish. Doug used chef salad ingredients to make a noodle salad for the judges. Mei made tomato sauce with sushi and shrimp, which was declared to have “not much of a broth.” She then admitted this dish did not turn out well and that she wouldn’t even give herself a good grade on the dish. 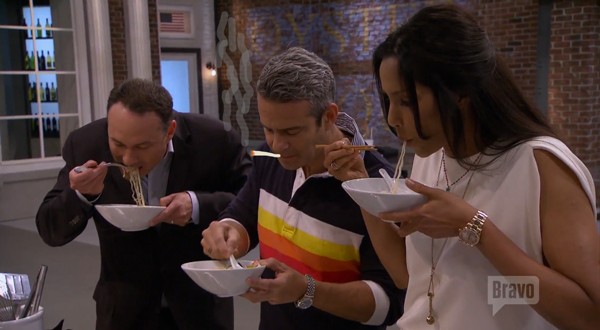 Andy announced that Mae’s dish was one of his least favorite because of too much seafood and not enough broth. He also criticized Doug’s dish. George’s meat dish went over well with Andy. Gregory and Melissa were both praised for their dishes. Andy then announced that the winner of the quick fire challenge was Melissa. Padma then sent them back to the stew room to await a surprise. The surprise was footage of an old episode of Julia Child’s cooking show. Jacque Pepin was then introduced to the cheftestants. 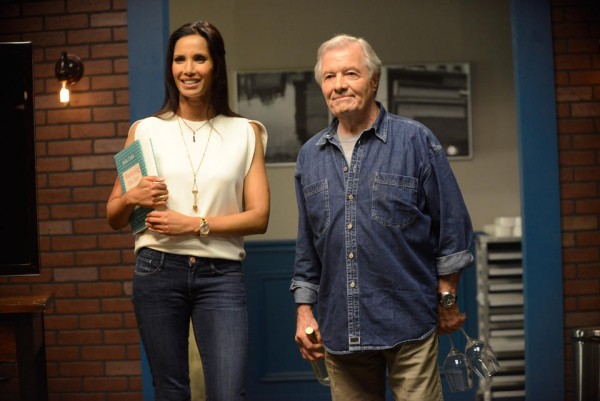 The elimination challenge was to make a dish worth to the legacy of Julia Child. The cheftestants were told their dishes had to represent what Julia Child stood for. Jacque Pepin shared some information about his meeting Julia Child for the first time. Doug said it was surreal to be speaking to Jacque Pepin.

Back at the Top Chef house they talked about the challenge ahead of them. Each of the five remaining cheftestants was nervous about how they were going to perform. When they arrived the day of the elimination challenge one of the judges of the elimination challenge was Julia Child’s great nephew, who is also a chef. Gregory went on to say he was savoring this moment in the competition. He then presented his dish to the judges. Several of the judges praised the chicken dish Gregory created. Jacque Pepin also said he did well preparing his dish. 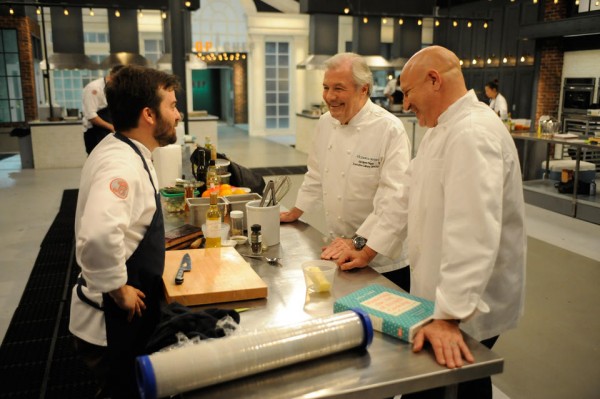 Mae stated that she hopes the judges like the twist she added to her dish.  Mae created glazed vegetables with spices, which the judges enjoyed. George said that he wished the protein in his dish could have had longer to cook. He then stated he was super nervous and he hoped his meat was tender enough.

George presented his braised veal dish with glazed vegetables as well. Tom said that the veal was not as seasoned as it should be. Melissa presented her short rib dish to the judges. Tom and Jacque Pepin said that it was bitter and didn’t taste right. Shen then she was disappointed because she didn’t take enough time to baby her ribs. Doug stated he didn’t think his Foie Gras had enough time to rest and that was making him nervous.  He then presented his dish to the judges and Tom told him it was over seared and undercooked. Other judges said it was a good dish. One judge stated that Mae’s dish was a personal statement. Jacques Pepin said George’s braised veal wasn’t tender enough. The judges discussed that Melissa did a great presentation of her dish. Tom then said that some of the chefs did not use the best technique to create their dishes.

As the chefs arrived at the judge’s table tension was running high among them. Tom stated that overall he thought the dishes were great but there were minor flaws in their techniques. Gregory and Mae were then told by the judges that their dishes were the best. Tom stated that Julia Child was about teaching techniques to chefs. Tom praised Gregory for his interpretation of the elimination challenge. Mae was told that her duck was cooked perfectly. Jacque Pepin then announced that the winner of the elimination challenge was Mae. 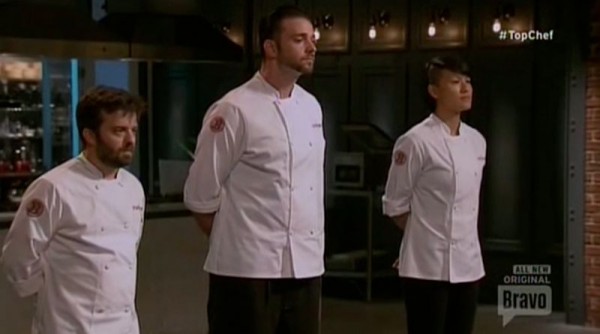 Doug, George and Melissa had the worst dishes of the elimination challenge. Tom told each of them that their technique was wrong and that their meat was undercooked. Melissa said she should have chosen a different protein. Jacque Pepin said her dish had too much fat. Doug stated he didn’t have enough time and didn’t move fast enough to get his dish done.

Tom stated that Julia Child would not have wanted to make anyone feel bad about their cooking, but the judges were going to have to. Padma then announced that Doug was the losing chef that had to go home. Tom told him he could get back into the competition during Last Chance Kitchen. Doug stated that he is disappointed that the dish he chose was too ambitious. He also said that he knows he can cook with the best of them now.

For next week’s show the remaining four cheftesants will be treated to a relative joining them in the competition. This could add an interesting twist to the competition as those relatives could either help or hurt the chef’s chances of succeeding and impressing the judges enough to win the season.

Last Chance Kitchen Update: Katsuji got completely bumped off of Top Chef: Boston after losing a liver challenge to Adam and Doug.