Home All News TV News ‘Timeless’ is back already on track for a season 3 renewal by... 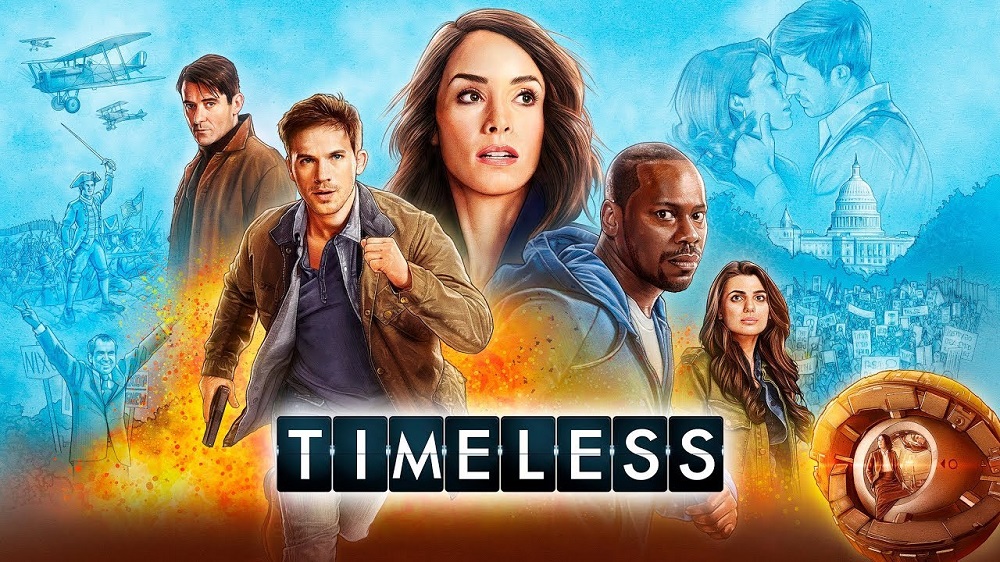 Timeless has returned and time travel remains an entertaining paradoxical headache. If you’re entertained by the X-Men films as they are despite the messy timelines, you’ll enjoy Timeless. The key to enjoying Timeless is not to overthink it.

For those not familiar, Timeless is another project of producer Eric Kripke, best known for Supernatural. It is an entertaining and educational time travel adventure starring a team of adventurers out to save history from the manipulations of a secret organization out to re-shape history and the world in their favor. Timeless takes much liberty in making minor changes in the timeline with people dying here and there, sometimes including important figures, unlike the film A Sound of Thunder where simply stepping on a pre-historic insect can drastically affect the Earth’s history. Now, like Supernatural, Timeless is both a fun and entertaining series with plenty of action, suspense, humor and a little drama sprinkled in. The series’ first season has scored high on Rotten Tomatoes and apparently has better scores on its second. Initial viewership scores were not so high putting the show in a bubble with a cliffhanger, but its later popularity and critical score has earned it a second chance. And that second chance is turning out nicely, five episodes in.

We’ve already heard that NBC will be giving it a season 3 renewal rather than putting in the excruciating bubble fans were put through last year. Actually NBC cancelled the show, but the fans put in a ton of effort which brought it back to life. The same sources that gave us the scoop on the season 2 renewal have already confirmed season 3.

Fans are already stepping in early to avoid a repeat which can only help the network solidify it’s decision to renew it.Timeless is topping USA Today’s Save Our Shows survey with NBC’s Blacklist and the Kiefer Sutherland political drama Designated Survivor.

Co-creator Eric Kripke has also laid out what fans can do to help make sure the show continues on. 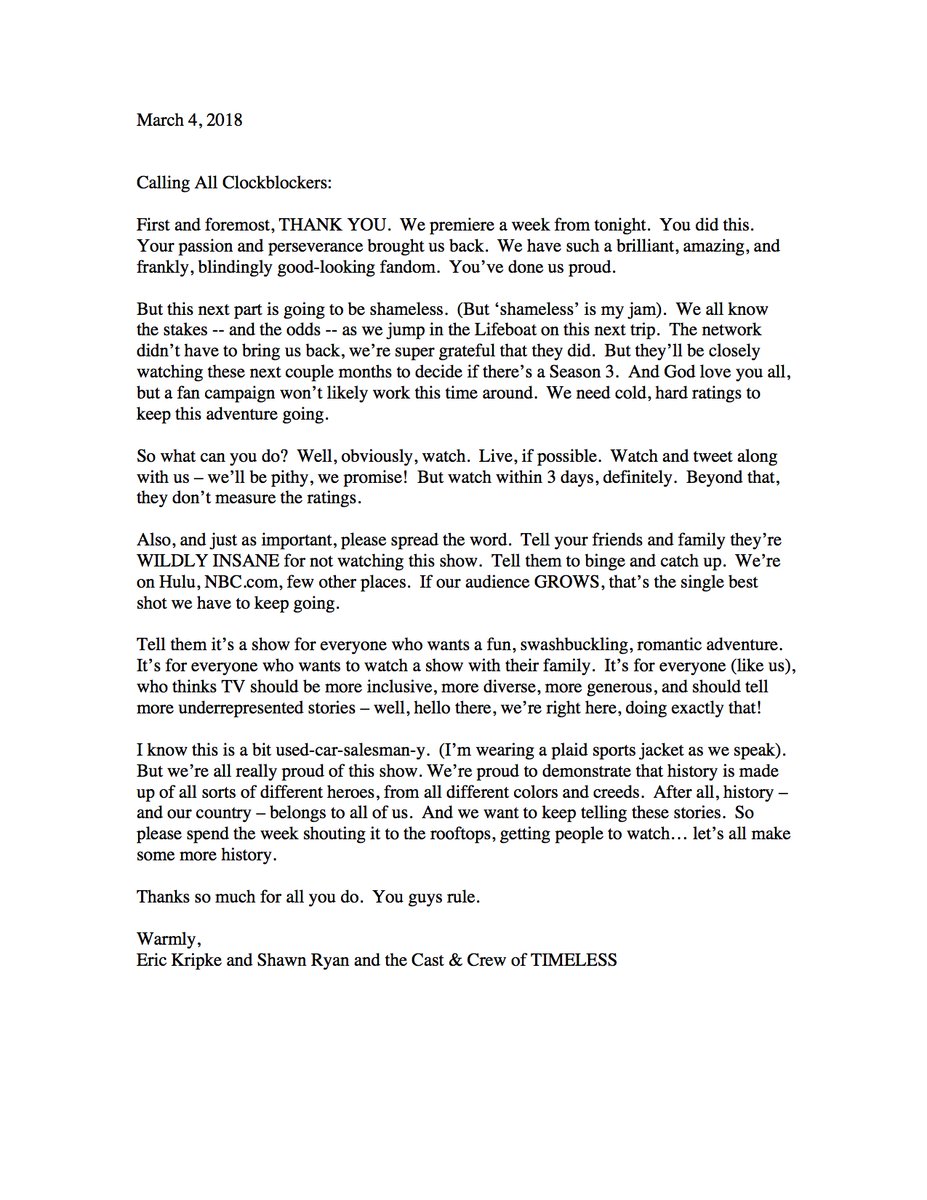 After defeating the immediate antagonist, time terrorist Garcia Flynn in Season 1, the team must now focus on the clandestine organization known as Rittenhouse and stop them from manipulating history. At the end of the first season, team member Lucy finds out that her own mother is a major Rittenhouse member and she herself gets inducted into the organization. The first episode takes Lucy and her mother Carol to World War I, The War to End All Wars, to rescue a certain soldier. In this episode, Here, they encounter famous scientist Marie Curie and her daughter helping in the front lines. The Lifeboat team follows them and successfully manages to take back Lucy while Rittenhouse succeeds in their mission to bring back another important member.

The second episode takes the Lifeboat team to the 1950s to the Darlington 500 races where they meet African-American NASCAR driver Wendell Scott. This little footnote in history actually means much to Rittenhouse in case they succeed. Here, Timeless actually misleads the audience here that the personality involved is actually a historical figure as they actually planted sleeper agents throughout history and make a name for themselves. This is something to watch out for this season as history gets crazier and crazier the more the show messes with it. Lucy looks amazing in her period costume and Rufus’ interactions with racer Wendell Scott was fun. This episode is so far the best in terms of entertainment.

The third episode involves the team going to Hollywood in the 1940s to prevent the theft of the only copy of Citizen Kane by a sleeper agent. The notable historical figure here is actress/inventor Hedy Lamarr, one of the best female minds at the time who developed a guidance system for Allied torpedoes. In their effort to fight Rittenhouse, they have to rely on Garcia Flynn, whose efforts in season 1 was actually to undermine Rittenhouse but with radical and violent means. In exchange for his help, in the form of information on Rittenhouse activities, Garcia demands his freedom from jail. The team orchestrates his escape and he joins them in their bunker. Meanwhile, team member Wyatt whose wife died six years prior and just started a relationship with Lucy finds out that his wife, Jessica is alive. 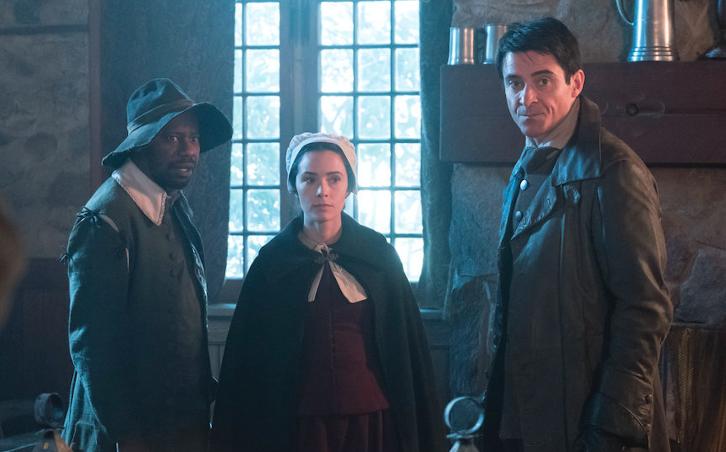 The fourth episode deals in an interesting subject of American history which is the Salem Witch Hunts where women who know algebra constitutes dealing with the devil. The team travel there to prevent another Rittenhouse setup wherein Abbiah Franklin, Benjamin Franklin’s would-be mother gets accused of witchcraft. This time, instead of Wyatt, Garcia Flynn is with them. We discussed that the series has taken some liberties with history and that relatively unknown historical bystanders were fair game as long as very important characters aren’t killed. Lucy herself has become de-sensitized to historical strangers because of the ongoing temporal war with Rittenhouse, just like Garcia Flynn who shoots who he can to get them through their mission. Wyatt takes Jessica to the bunker despite and finds out that the reason Jessica is alive is because of Rittenhouse.

The fifth episode saw John F. Kennedy brought into 2018 and learns from Wikipedia how his older brother dies along with himself and younger brother Robert. Wyatt and Rufus are forced to bring a 17-year-old John F. Kennedy with them to the present; Kennedy escapes into modern-day San Francisco; the team must rescue him and return him to the past before Rittenhouse assassinates him in 2018.

As the series goes on, history continues to unravel, yet at most remains the same. To enjoy it is to not overthink it. Hopefully, like Supernatural, Timeless becomes another winning pelt in the belt of Eric Kripke and his team and may Timeless continue to be as enjoyable and as Timeless as Kripke’s other creation.