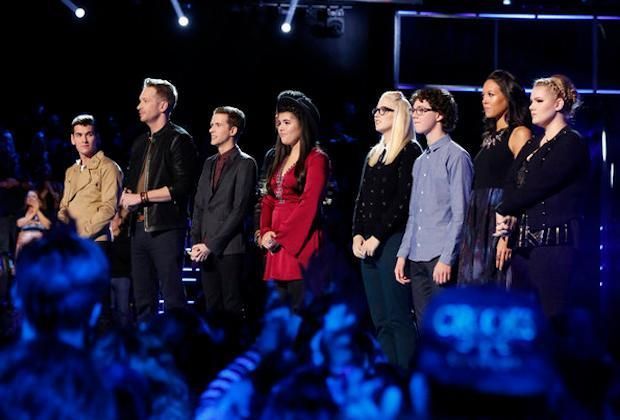 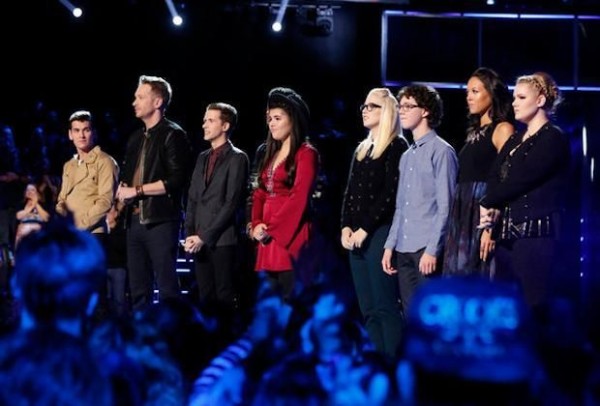 While the Top 12 contestants may have made it through the huge cuts last week on The Voice, they weren’t safe for long as they entered the next round of Live Eliminations. Tonight the four coaches – Gwen Stefani, Adam Levine, Pharrell Williams and Blake Shelton – once again graced our TVs as they watched one artist get the boot from the competition.

In contrast to last week, we didn’t get a flurry of flashbacks of last night’s performances, rather we watch as almost every contestant is asked different questions about their experiences on the show thus far.  Basically, it feels like the singers are beauty pageant contestants, as they are all (somewhat awkwardly) put on the spot.

The show begins with questions for contestants Amy Vachal and Barrett Baber, who give very cookie cutter answers, as they thank the judges and their families. However, shortly after host Carson Daly announces the first two contestants who received enough votes to stay in the competition another week. These two contestants are revealed to be: Jordan Smith (Team Adam) and Jeffrey Austin (Team Gwen). Both of these singers managed to crack the Top 10 iTunes chart with their performances last night.

Afterwards, Carson gets the judges to comment on their impression of last night’s show. Unsurprisingly, each of them boasts about how impressed they were with each artist. Of course, they also have to give the contestants some false hope, by exaggerating how many of them will find careers in music whether they win the contest or not. During this, coach Pharrell may not have been donning his signature hat, but he was sporting some sleek (kind of weird) shades.

Following a few more minutes of Q&A between the contestants and Carson, he goes on to announce the next two singers safe. This turns out to be Team Blake’s Emily Ann Roberts and Madi Davis (Team Pharrell).

At this point, all four of the coaches have one singer moving on to next week’s show.

For a change of pace, Team Blake takes the stage to perform “Lean on Me” by Bill Withers. Even coach Blake joins his team members. I don’t know if it’s just me, but it seemed like Blake was trying to impress a certain somebody in the front row (aka Gwen). The overall performance wasn’t anything too exciting, but Emily did have one (moderate) breakout moment in the midst of it.

Shortly after, Carson goes on to announce three more singers who are staying in the competition. He calls out the names of Braiden Sunshine (Team Gwen), Barrett Baber (Team Blake) and Amy Vachal (Yay!…Team Adam). Amy was also another artist that made it onto the iTunes Top 10 with her performance of Drake’s “Hotline Bling.”

Team Pharrell is the other group to perform together tonight. Pharrell and his team come together to sing their coaches own “Just a Cloud Away.” Unfortunately, Pharrell was the weak link in the performance. However, he is wearing shades indoors and just on another level of cool, so who am I to judge. And admittedly, after watching his deposition for the “Blurred Lines” case, I think I might be hypercritical of him.

After the performance, Carson announces that the final three singers who have secured a spot (for sure) are Evan McKeel (Team Pharrell), Shelby Brown (Team Adam) and Zach Seabaugh (Team Blake).

This leaves Team Gwen’s Korin Bukowski and Team Pharrell’s Mark Hood to perform a song of their choosing for the instant save. Mark takes the stage with “Signed, Sealed, Delivered I’m Yours” by Stevie Wonder. I have never been a fan of Mark, so, unfortunately, he was fighting an uphill battle in my opinion. His song choice was much better than his slow performance last night. He improved, but he just doesn’t bring anything special. In addition, his performance seemed much too flashy. He needs to learn quality over quantity.

Following Mark is Korin, who sings “Don’t Know Why” by Norah Jones. The song is perfect for her voice. She does have some vocal similarities to Jones’, but she also has her own unique qualities that brought something fresh to the light tune. I thought it was her best performance thus far, and several of the coaches noted the same thing.

After the last commercial break, the votes are in, and Carson announces that Korin outperformed Mark and won herself a spot in next week’s performances. Thus, Mark of Team Pharrell is sent home.

For the final comments, Gwen gives a slight insight into her personal life (which is currently being played out in the tabloids) through her critique to Korin, saying, “I feel like we were put together for a reason. Both of us are busting out of a cocoon world, ready to fly. You have a whole new world ahead of you, and so do I.” A whole new world with Blake Shelton J

Watch as the Top 11 performs on The Voice next Monday, November 23 on NBC at 8 pm.