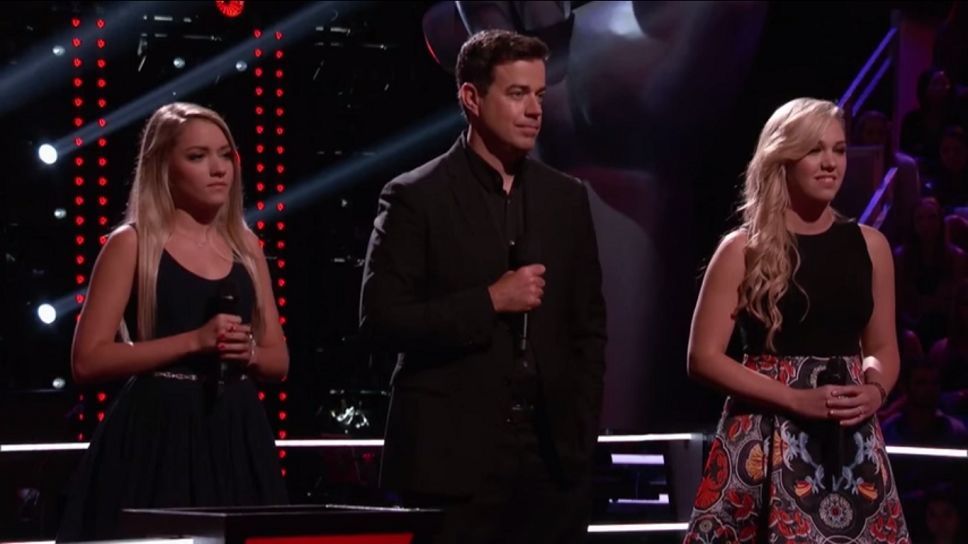 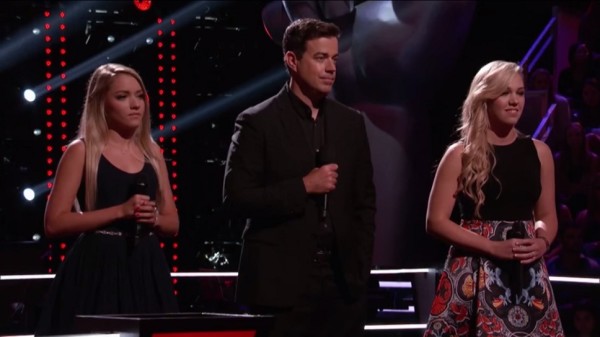 It was the last round (part 4) of the battles on NBC’s The Voice. Judges Gwen Stefani, Adam Levine, Blake Shelton and Pharrell Williams paired up their remaining team members to go against one another in hopes of earning a spot in the knockout rounds. Only the winners get to move on – however, Pharrell still has his save, which means he can steal one singer from another judge’s team who would otherwise be going home.

In addition, there was also a glimpse of next week’s episodes, which feature Rihanna as the key advisor – a role that was previously held by artists such as Taylor Swift and Nate Ruess. In one-on-one interviews, each of the judges comments on Rihanna’s ability to give open, honest feedback, while Rihanna is shown calling Blind Joe “sexy.” She will definitely be bringing her own take to the advisor role.

But until then…here is the recap of this season’s final battles:

“Edge of Seventeen” by Stevie Nicks

Adam paired up his two resident 17-year-old girls, Shelby and Amanda. Amanda identifies as a rock singer while Shelby is one of the few country artists that Blake wasn’t able to get his hands on.

During rehearsals, Shelby was overthinking the performance, as Amanda’s previous experience in a band intimidated her. However, Adam and his advisor John Fogerty assure her that she has her own unique talents and just as much of a chance to win the battle as long as she can immerse herself into the song.

Both girls give powerful vocals during the battle and definitely do the hit song justice. While Amanda further showed her rock vocals, Shelby also established her ability to sing a rock song and seemingly left her country twang behind.

Blake tries to help Adam choose between the two girls, but is amazed by the two singers who are “just 17,” although he seemed to prefer Amanda’s rasp, even if he didn’t admit it.

In the end, Adam chooses to keep Shelby, as she was able to “sass up” her performance. He tells Amanda that they were evenly matched, but unfortunately Shelby was the one to rise to the occasion. Personally, I think he may have kept Shelby (the country artist) just to spite Blake.

“To Love Somebody” by The Beegees

Pharrell paired up 26-year-old Amy against duo Jubal, 44, and Amanda, 36. Amy is a soft-spoken singer from New York while Jubal and Amanda are a folk-country duo. You may remember them, as they were the couple that got engaged while on stage during the blind auditions.

Pharrell explains he paired the singers together as they both have folk elements to their voices. His advisor Missy Elliot comments that Jubal and Amanda’s obvious connection is alluring. Pharrell advises Jubal and Amanda to sing together, as it is much more magical than when they are singing separately.

While Amy may have been up against two musicians, she was the one to stick out in the performance. Unfortunately, Amanda and Jubal’s belting and attempted harmonies fell flat and didn’t produce any special moments as Pharrell had hoped.

Amy ends up winning a place in the knockout rounds, and the newlyweds are sent packing.

“I’m That Kind of Girl” by Patty Loveless

The last battle round for Season 9 was between two Tennessee natives, Emily, 16, and Morgan, 22. Both country artists had impressive auditions, but it was Emily who really stuck out in my mind (she sang “I Hope You Dance”).

Blake asks the girls if they like Patty Loveless and right away they both reply, “oh yeah.” Clearly, their assigned song is right in their wheelhouse (classic country). During the rehearsals, Blake advises Morgan to be weary of the desperation that sometimes comes out in her vocals, especially when she is trying to accurately hit the high notes. Meanwhile, he tells Emily to add a bit more spunk into her performance so that Emily doesn’t drown her out.

Both girls bring some attitude to the song. Morgan’s voice sounded much more mature in comparison to Emily. However, Emily is able to belt out incredibly high notes. So it was definitely a close battle.

In the end, Blake chooses to keep young Emily Ann Roberts. Fortunately, Pharrell still had one save and steals Morgan (getting himself his first country artist).

And that’s it for season 9’s battle rounds…

You can see Rihanna take on the role of key advisor during next week’s knockout rounds. Starting Monday, October 26 on NBC.