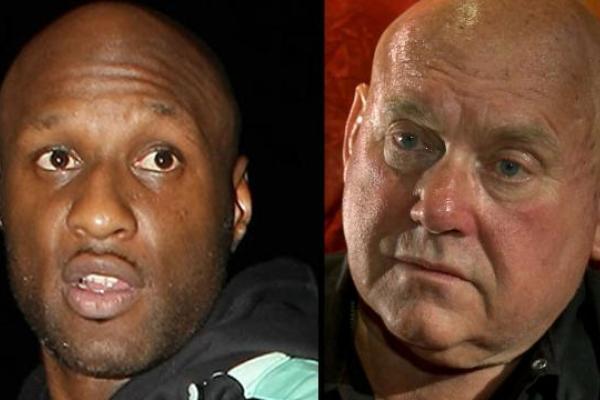 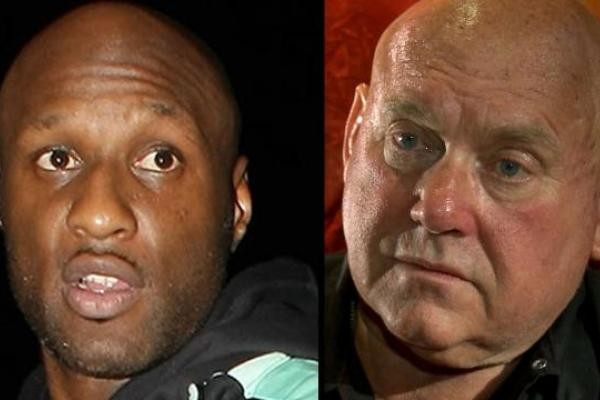 2:30 PM ET: It appears that Dennis Hof has done quite a series of interviews covering many aspects of Lamar Odom being found unconscious at his Love Ranch. We’re hearing that some of these are raising eyebrows with law enforcement as his stories are changing somewhat. After we broke the story that Madison Montag was one of the girls who found Lamar, it was picked up and Hof had stated in interviews that the former basketball star had been ‘chatting’ online with Nevada’s first legally licensed transsexual courtesan the week preceding his visit to the brothel. Hof stated in a Sirius XM interview that Odom had intended to meet her and spend some time together.

Hof originally told People Magazine that it was Ryder Cherry and Madison that had found Lamar, but then he changed his story ever so slightly with another media outlet to say that he wound up with Ryder Cherry and Monica Monroe. Our sources say different and that it was Montag he was also with which was also confirmed when we called the Love Ranch early last Wednesday morning. Our source, who understandably wishes to remain anonymous, said that the stories have changed so that it wouldn’t get out Lamar was with Montag too. “Things have gotten out of control there, and that’s why girls are leaving and not coming back,” they said. “The more Hof talks, the worst things keep getting.”

As we predicted, Khloe sent her lawyer to dismiss their divorce case so this whole storyline is right out of the Kardashian playbook for the upcoming season. At least friends of the family won’t have to put out money for another wedding since the court’s backlog kept them from officially divorcing the couple.

Don’t be shocked if the two wind up having a renewal of their vows though as a great ratings draw. Naturally, they’ll say that since they’ve been given a second chance in their relationship, this is only natural; plus that will give E! another wedding special, and the two will have another bonanza of wedding renewal gifts to sort through. Yes, it sounds cynical, but even the most diehard of Kardashian fans know that this is exactly how it will all play out.

What is with all the change ups? That’s my burning question right now in the Lamar Odom situation. The answers to that question solely lie on the owner of the Love Ranch, Denise Hof, whose reputation is working against him and calls into examination the motives behind his behavior.

From the cryptic (and not so cryptic) social media messages by Madison Montag, the missing brothel workers and the name changes of the girls who found Lamar Odom exactly a week ago, something is rotten in Denmark. Or in this case, Nevada… But you knew that already.

How can anyone really believe the stories that are being told? In particular, the original reports of whom found Lamar and called 911. What is being told now conflicts with what was told initially and the source of the confusion is Hof himself. But what more can you expect from a man who is offering patrons of his Love Ranch the opportunity to view the room in which Lamar was found- for $500 a pop?

This has been one whirlwind of a week with Odom going down, looking like he’s not going to make it, making it, being discharged, flown to Los Angeles and as of this reporting, walking. But what really happened, damn it? The more the stories change, the more I want to know.

I am not even going to touch on Lamar’s “recovery” which seems a little too good to be true. Don’t get me wrong I am glad and happy and was pulling for him hard; it’s just… a miracle. We’ve even contacted three doctors who specialize in this field, and they were all unanimous in their surprise at his reported speedy turnaround.

What I do want to bring into focus is the way in which the girls involved have been supposedly treated, per their social media platforms, interviews, and even their own accounts and why the names of the two women first reported having found Odom have changed. The reason that what has happened to these girls since the course of events started to unfold is important because it gives a closer look into what Hof may be hiding. Because honestly, it seems that he is trying to cover things up (now more than ever) and or pass the blame off to someone else, namely one of the three women who have been mentioned in connection with finding Lamar.

Right after Lamar was found and taken to the hospital, Hof was talking eagerly to the press, and when Khloe Kardashian’s press person asked him to step aside, he was very quick to say that “He knew what happened.” Now it looks like he’s run to TMZ (he knows the Sheriff’s Department there will be paying attention to that site too) as some form of PR damage control. After the past 48-hours, it looks like there’s definitely some damage that’s been done.

This is what we know: Madison Montag was one of the women that Hof initially said found Lamar in one of his first interviews with People Magazine, along with Cherry Rider. However, media outlets are now reporting Monica Monroe and Cherry Rider as the two in the room after we published our story on this. Right now if you Google, “Who found Lamar Odom,” as of this writing, stories pop up quoting Monroe saying “I didn’t do anything wrong… I saved his life.” Interestingly, People hasn’t found a need to correct their article, and it’s not looking like they’ll have to.

Our team here at Movie TV Tech Geeks spoke with the Love Ranch very early Wednesday morning, and everything in People regarding the names was confirmed. We were also informed that there was only one Madison who worked there. Some might say maybe Hof got confused when he was talking with People, but this is a guy who’s had a very consistent story to the media, until today, when it appears he’s tossing some of his girls under the bus. It certainly leaves one wondering what exactly happened and was there some form of foul play going on? Several sources who wish to reamin anonymous have been saying that Hof has let it slip that Lamar was enroute to see Montag and had been communicating with her via social media the week before. It’s curious as there were also rumors that the staff at the Love Ranch was required to fill out a nondisclosure agreement, but if Hof’s talking so openly, we can assume he didn’t have to sign it.

There are some very shady things going on behind the scenes here, and while everyone wants to point at Lamar being on the Ranch doing drugs and sexing, I want to point out the suspicious behavior of Hof, after the fact. He has now, according to numerous reports, not only bailed on paying the two women the $37,500 they were supposed to receive for being with Lamar 24/7.  Hof is now casting suspicion on them, namely Madison, as the person who possibly supplied Odom with illegal drugs.

Madison, of course, has sought to distance herself from the situation as much as possible saying via social media: 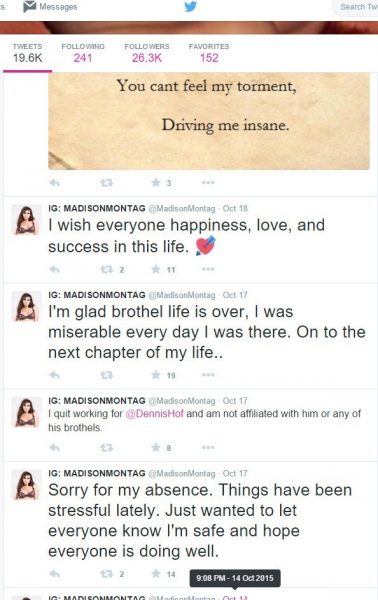 “I quit working for @DennisHof and am not affiliated with him or any of his brothels…I’m glad brothel life is over, I was miserable every day I was there. On to the next chapter of my life.”

She was only at the brothel for a two weeks, and no doubt, the attention she has gotten from this situation has been overwhelming.

“Sorry for my absence. Things have been stressful lately. Just wanted to let everyone know I’m safe and hope everyone is doing well.”

Despite all of this, she has never once denied being one of the women who found Lamar, and she has had one Instagram follower leave her a few messages stating: “Killer…U drugged him” 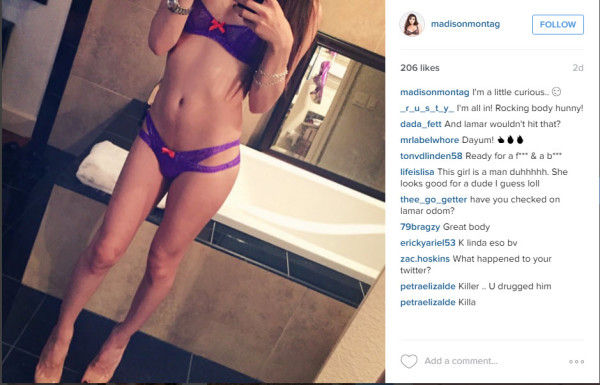 Montag tweets how miserable life was at the Love Ranch, but just a few hours before Lamar was found she was happily tweeting out “Let’s party!” These tweets have been deleted, but the screenshots are below. 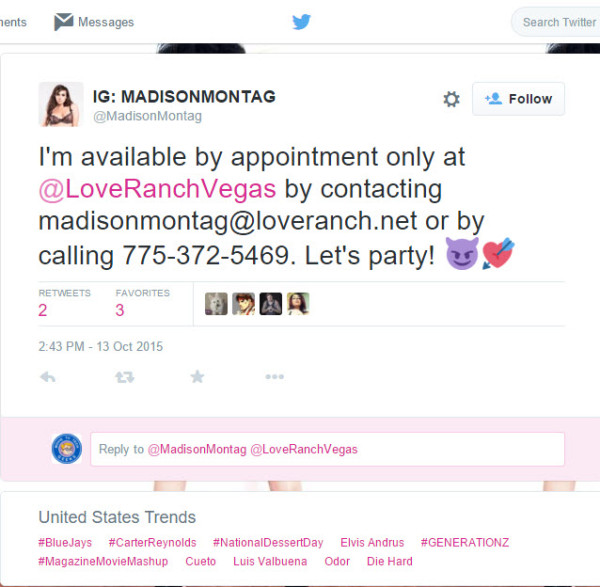 It seems odd that Hof changed the name for other media outlets following People, but it may have been just trying to cover for Lamar if he did choose Montag. She made news earlier this month for being the first transsexual licensed legal courtesan in Nevada. After Kylie Jenner’s, boyfriend, Tyga got hit with allegations of cheating on her with a transgender mistress (Mia Isabella), the Kardashians certainly don’t want another tuss up in the media like this for Lamar. It’s a little odder since Montag has a rather striking resemblance to Kim Kardashian. 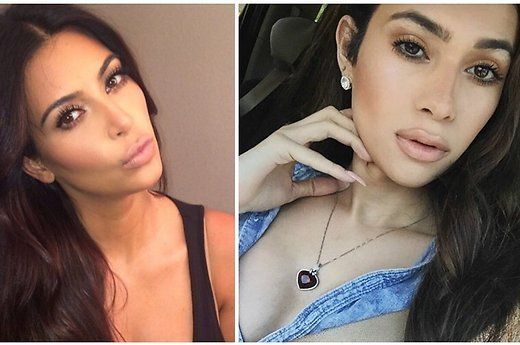 His not wanting to pay them what they are due of the $75,000 is janky (messed up, fowl, hot mess) but to say that they are the reason this all happened is reaching. In fact, it is deflecting. What is he trying to hide?

He claims that his business has tripled, but after the Daily Mail released images of Lamar sleeping before he was found unconscious, I’m sure many customers are working up a cold sweat wondering if their image is somewhere deep in Hof’s office ready to surface when the right amount is offered. Losing your most popular girls, plus this fact alone, looks like it could really hurt his bottom line.

Something is definitely amiss in all of this and getting to the bottom of it has a lot of twists and turns. In my twenty plus years on this earth, the only time you send people on a wild goose chase is when you don’t want anyone to find out the truth.

The last odd thing is if you’ve got a few working girls who’ve hightailed it out of your establishment and you’re casting dispersions on them, why would you still keep them listed on your business website as ‘Featured Lovers?’

To read all the articles on Lamar Odom, just click over here.