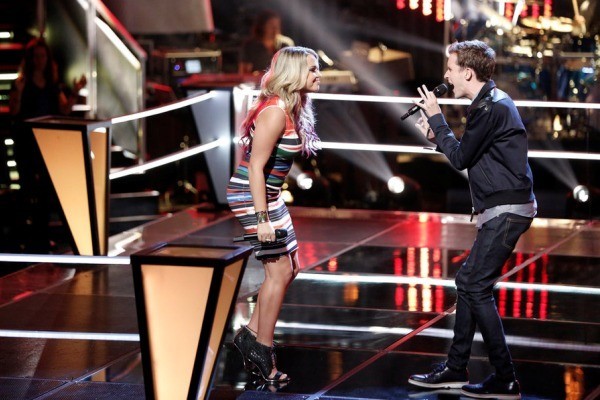 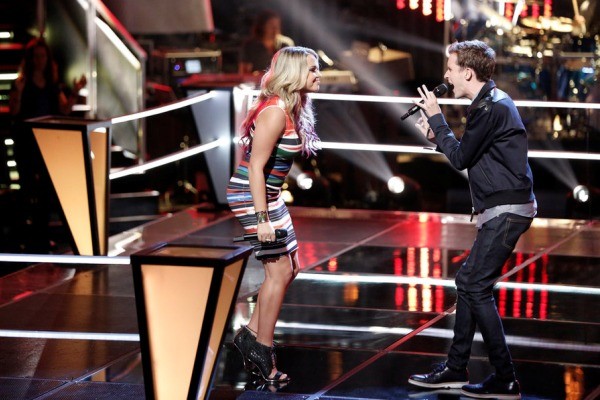 Part three of The Voice’s battle rounds aired and they keep getting better and better. Once again, judges – Gwen Stefani, Blake Shelton, Adam Levine and Pharrell Williams pitted two of their team members against each other, in hopes of winning a spot on their team going forward.

So here is a recap of the battles from tonight:

The night started off with two contestants on Team Blake. Blaine is a country singer with a prominent rock edge. Meanwhile, “Blind Joe” is a classic country artist, who was born without vision. Joe jokes that this blind audition will “really be a blind audition.”

During the rehearsals, Joe struggled with coming in at the right moment when singing with Blake, as he is unable to see the cues that most artists look for. However, he does get some praise from advisor Brad Paisley who is amazed with his guitar playing and musical abilities.

Joe was sitting stationary with his guitar during the performance, while Blake jumped around the stage. However, it is Joe’s precise and expressive vocals that really stuck out. Additionally, his story is undoubtedly intriguing.

In the end, Blake decides to keep Blind Joe. Fortunately, Adam swoops in and steals Blaine for his team.

“Nobody Knows” by Tony Rich Project

Adam teams up soulful singer Cassandra and Budapest pop star Viktor. Adam claims he paired the two up because he feels that have a lot in common when it comes to their vocal qualities. Before the battle, Cassandra admits she has to be able to find a balance between her powerhouse notes and singing with precision.

During the performance, Cassandra showcases her vibrato through various runs. The two musicians are able to navigate through various harmonies and actually had good chemistry with each other throughout. However, Cassandra’s vocals are matched, if not topped, by Viktor’s polished stage presence and artistry. In the end, Adam decides to choose Viktor and Cassandra is sent home.

Gwen’s first pairing is 30-year-old Chase and 20-year-old Korin. This is an interesting pairing, as Korin has a much more prominent voice, while Chase is more soft-spoken. Gwen felt “Samson” was an ideal song for them, as it would allow them to showcase their obvious artistry.

Unfortunately, Korin has a leg-up with the notably high-pitched song Gwen assigned them and this advantage carries on into the battle as Korin continues to outshine Chase. In the end, Gwen ends up saving Korin and sending Chase home.

Pharrell paired up two of his youngest team members, 20-year-old Evan McKeel and 19-year-old Riley Biederer. Riley showcased a powerful vocal in her audition, while Evan’s performance was more soft but precise.

Initially, Riley felt intimated, as Evan is a self-proclaimed fan of Stevie Wonder. However, she feels she can bring her own spin to the song by drawing from some of her R&B influences.

During the performance, it seems like Riley felt the constant need to keep up with Evan, who was much more at ease. Blake says that while Riley’s voice may be more unique, he would still give the win to Evan just based on his overall performance.

Pharrell listens to Blake and ends up keeping Evan, but Gwen decides to use one of her steals and gets Riley for her team.

“No One Is to Blame” by Howard Jones

For her next pairing, Gwen decided to pair up 15-year-old Braiden and 23-year-old Lyndsey. Braiden is the one of the youngest competitors this year, but has vocals that sound way beyond his years.

Gwen gave the duo “No One Else is to Blame” as she felt they could bring a much more modern spin to the classic song.

While the singers may be talented, the song is really slow and doesn’t showcase either of the singers’ voice like a battle round should. However, it seems like Braiden’s young age played to his favor (which is a reoccurring theme on the show) and he ends up keeping his spot on Team Gwen.

“Where You Will Go” by The Calling

The final battle of the night was between Team Adam’s Chance Pena and the twin duo Andi & Alex. 15-year-old Chance has a deep and mature voice. Meanwhile, Andi & Alex, also 15, have angelic-like vocals. Thus, Adam thought the battle between the three might be an interesting collaboration.

During the performance, Chance demonstrated his unique voice and ability to hold his own on stage with the two sisters, however, Andi and Alex’s harmonies were mesmerizing throughout and this often overpowered Chance. In the end, Adam couldn’t pass up Andi and Alex. Fortunately, Blake uses his steal to keep Chance in the competition.

You can catch Part 4 of the battle rounds on The Voice tomorrow, October 20 on NBC.