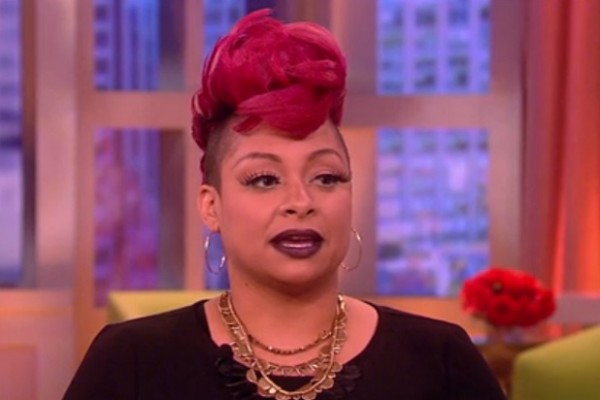 How can a people expect to get ahead when even members of its own community deny them the chance to advance themselves via employment opportunities based on an age old method of discrimination rooted in racism? Once more, what does it say about the state of our future when those saying that they are more than willing to show this form of bias are millennials. Aren’t we supposed to be the most advanced and socially accepting generation yet?

Can someone let Raven-Symoné know that please! Her comments on “The View” in which she STANDS UP and proclaims that she would not hair someone with a “ghetto sounding name” has gotten her in hot water once again. People are calling her hypocritical (I mean look at her name) they are accusing her of racism, they are saying she is discriminating and they are right about all these things. But why does she feel like this? What causes her form her mouth and make these kinds of statements? If you have no clue what she said, let me help you, plus we have the full video below, and you can see that even Whoopi Goldberg was rendered speechless.

“Just to bring it back, can we take back ‘racist’ and say ‘discriminatory,’ because I think that’s a better word…And I’m very discriminatory against words like the ones they were saying in those names. I’m not about to hire you if your name is Watermelondrea. It’s just not going to happen. I’m not going to hire you.”

Raven said this during a segment in which she and her co-hosts discussed a new study that found Americans make racist assumptions about a person based on their name (because we need a study to tell us that). In the segment, it listed the 60 “most ghetto names” as well which prompted her to show her ass.

Aside from Raven feeling this way, which I will get into more in a bit; the thing that really stings about her words is that it is true. So many employers discriminate in this way and I know first had for this to be the case. I legally have four valid names. My father gave me two last names and a very non ethnic middle name. When I use to apply for jobs as the questionable, Rasheda Abdullah, I didn’t really get any hits back. In fact, I didn’t get any. But, when I applied for jobs with my “other name,” I was able to not only get callbacks and interviews, I actually got a job.

So what Raven is doing when she expresses her disgust with ghetto names is affirming a mindset in corporate America that many companies have because hell, if a black person won’t even hire another black person because of their name, non-black folks who share her sentiment feel justified in their discriminatory practices.

We all know that Raven is wrong, but bringing it back to my question above, what makes her say these things? As you know (or if you don’t) this is not the first time she has made comments rooted in self-hate. With that, the two conclusions I have come to are a) she is way out of touch with reality or b) she thinks she is better than other black people who are “not on her level.”

Sometimes a person doesn’t realize how they come off when they say certain things. That is due to a lack of experience with a subject or a situation, which garners an incomplete view of the world. Raven has never had to apply for a job where her name wasn’t known. I mean she was on a “black show” since she was like four years old. What does she know about having to apply to a job as a no body? Nothing.  That’s why I don’t get why she made those statements and then tried to laugh it off. She has not empathy on this subject.

Which brings me to the other reason and one I believe more and more every time she makes these kinds of statements. She thinks that she is better than other black people. You have been around folks, black or white or whatever, who think that their station in life gives them the right to make snap judgments of others who don’t have what they have. Raven has probably never had the experience of interviewing for a job based solely on your resume and qualifications. That type of treatment breeds entitlement and a feeling of entitlement will always show in a person’s words and actions. Plus, the fact that she didn’t take into consideration that her name is pretty damn “black” further shows that she thinks she is exempted from the ails of the black community. AND it’s hyphenated.

Raven-Symone continues to show how she feels about people who are not like her and it is disgusting. What will it take for her to see other black people as she sees herself- smart, capable and worthy?

Raven-Symoné waited until the last minute on Sunday to ‘clarify’ her View comments. Here’s what she had to say:

In a Facebook post shared Sunday evening, the co-host clarified her remarks and promised that she has “never discriminated against a name.”

“I’d like to begin by saying that I was not attacking a specific race, but repeating a name that was said in a viral video which has received over 2 million likes,” she wrote to her 4.8 million followers. “My comment was in poor taste. My lack of empathy towards name discrimination was uncalled for….As an equal opportunity employer, I have never discriminated against a name….even though I said I would, it’s not true.”

As soon as the episode aired, a number of viewers began slamming the 29-year-old for her comments. Even Raven’s father had some words to say on Facebook over the weekend.

“I certainly don’t agree with what she said….but she is damn near thirty years old,” Christopher B. Pearman explained on social media. “She’s a grown ass woman making grown ass mistakes. We all have been guilty of this.”

He added, “Her Mother and I Love her Very much and will always support her and have her back. Even if sometimes……….she says some dumb S#%T!”

Tonight, Raven wants to make sure her comments don’t spin further out of control. At the same time, she’s also opening up about her own experiences with discrimination.

“I have been denied many jobs because of my skin color, body size, and age. Each time I was rejected, my self-esteem was negatively affected, so I empathize with those who feel victimized by what I said,” she wrote. “We would hope that when it comes to hiring, our names, physical appearance, sexual orientation, and age would never outweigh our qualifications, but often times, they do, that’s the truth and it sucks. But I should not be part of the problem, I should be part of the solution.”