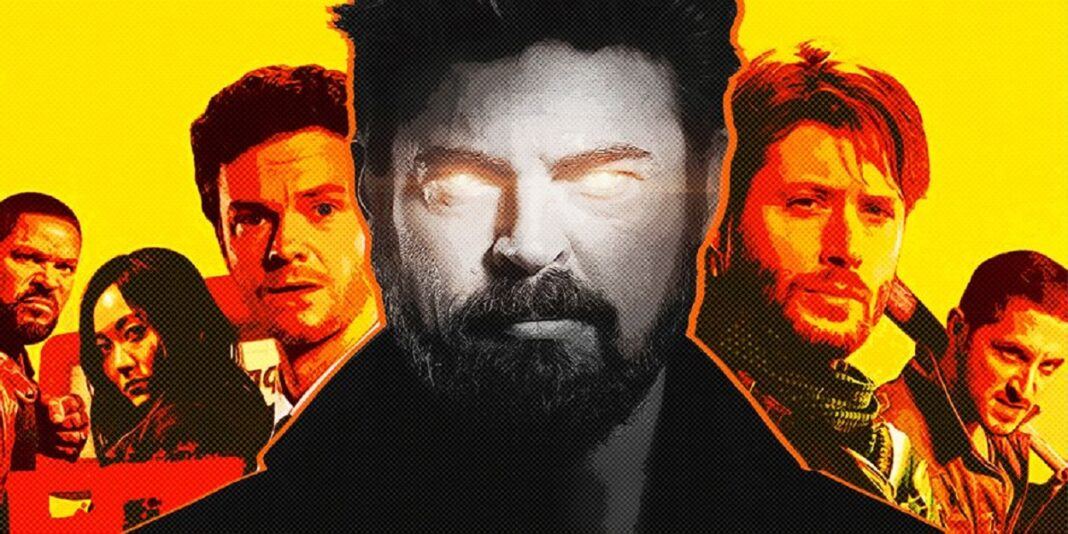 After the epic events of last week’s episode of “The Boys,” this has been another week of anticipation while enjoying periodic teasers from the official accounts and lots of delicious back and forth between the Vought Intl. in-world social media and “The Boys” intrepid social media manager, who is hitting it just right with the fans. This episode’s title is a real mouthful with, ‘The Last Time To Look On This World of Lies.”

Whenever you see fans tweeting that they’d like to be friends with the person running a show’s twitter, you know someone has got their finger on the pulse of the fandom. But I would have expected no less! In one of my first chats with “The Boys” showrunner Eric Kripke, back in his “Supernatural” days, we talked about finding that elusive balance of keeping track of what fans want and also staying true to the vision of the work you’re putting out there. It goes wrong as often as it goes right, but, so far, “The Boys” is finding that balance – and I am here for it!

We left off episode 4 at a pivotal time, with Soldier Boy freed from his cryogenic chamber and on the loose somewhere, Kimiko bleeding and badly injured, and Hughie still staring in awe at his magically (Temp V) healed arm and basking in the way he helped save the day.

So, as I sat down to watch the screener for episode 5, I was practically bouncing waiting to see what happens next. To say I was on the edge of my seat for most of this episode is not an exaggeration. The title alone gave me chills – any title in this show that has the word “last” in it is guaranteed to put me on edge. Who can blame me?!

This is the non-spoilery preview of Episode 5 (Last Time To Look On This World Of Lies), so no major spoilers – you can read and still be assured of experiencing the full breakneck speed roller coaster of emotions that a new episode of “The Boys” is guaranteed to bring. We already know from the official account (so it’s not a spoiler) that this episode includes at least one musical sequence, which only Kripke can pull off integrating into a show as dark as this one. It is PRICELESS.

We also know from the official account that ‘The Legend’ appears for the first time, a character from the comics played in the series by Paul Reiser. Without spoiling anything about who he is or who he interacts with, let me just say that he is A CHARACTER – and that I thoroughly enjoyed everything about him.

In many ways, the fifth episode of the eight-episode season ramps everything up into high gear. Almost everyone is at a turning point, back up against the wall, certain that they know best how to get what they want or what they think others want – and most of them willing to do just about anything to accomplish that.

To say there are unlikely alliances as a result is also not an exaggeration – even if we did suspect some of them were coming. Mother’s Milk, as he often does, has the dialogue that sums up where they are right now, quoting his father who is so much the guiding light in his life even as he tries to live his own differently in terms of his daughter. If you don’t draw the line somewhere, how the hell are you gonna know where you stand?

There are lots of lines drawn in this episode, and there are also times when someone decides there is no line – which means there’s nothing to cross. This has essentially been the question the show has asked since the beginning, for all its characters. Where’s your line?

The fact that not every character has one at this point is, frankly, terrifying. That’s becoming a risk to more characters than we might have expected, which threatens to blur the other line – the one between supes and the boys – into nothing. It’s interesting to see which characters have managed to hang onto keeping a line and which haven’t, with all the moral and ethical questions that brings with it. Is it okay to lie? Kill? Betray? If there’s no line, what will ever be off the table?

The other underlying theme of this episode is what it means to be human, and what we really mean by “humanity”. Is it determined by what’s inside you, literally or figuratively? Genetics, biology, what’s running through your veins? Is it the decisions you make and whether you retain a capacity for empathy, to care for other humans? And is it antithetical to power, the ultimate corrupter? So many good questions that are achingly relevant, not just on the screen, but in our real world right now.

I love that “The Boys” has slowly humanized its supe characters, with even Butcher pointing out that they’re all just people. And yet, knowing what they can do, he still fundamentally believes they’ve all “gotta go”. The exploration of what power is and what it does to people continues – we’ve seen reluctant supes wish they could go back to being just people, and we’ve seen what a taste of power does even to someone who has the best of intentions.

At the end of last week’s episode, we left the ethical heart of the boys, Hughie, staring at his miraculously Temp V-healed arm with something like awe and wonder – while Kimiko lies gravely wounded in the same van. If that’s not a chilling case of power corrupting, I don’t know what is!

And then, of course, there are the people who have the worst of intentions.

At some points in this episode, the real-life parallels are overt, echoing the ways in which those in power have marginalized and stigmatized those who are not. Sometimes Kripke and company really do seem prescient.  I have sometimes heard the same words being spoken onscreen in the real world, from people trying to keep that power structure in place, gaslighting along the way to ensure there’s no change to it. From cancel culture to ‘bad apples’, from All Lives Matter, to ‘I don’t see color’, the talking points are all the more jarring because we’ve actually heard them.  We even delve into the standard “this is no threat whatsoever, America is safe, go out there and go to your restaurants and movie theaters and live your lives” message – I might have jumped up and started cheering at that point, honestly.

I love when The Boys does that – it feels validating, cathartic. It’s fictional media but it’s reflective of so many of the things that are wrong in real life, and it feels like a relief to know others see it too. A Train’s arc at this point in the season is particularly interesting, and true to The Boys, takes some unexpected twists and turns.

Without giving anything away about his backstory and his journey, I have also been knocked on my ass by Jensen Ackles’ performance as Soldier Boy. I know how good he is from watching him bring Dean Winchester to life for fifteen years, but I didn’t know if he could make me feel anything for a new character who is only a parody of a hero, not a real one. I didn’t know if Kripke and the writers would bring as much nuance to this character as they have to the others so that my emotions are all over the place and my empathy is pulled to the forefront again and again, only to be stomped back down. It’s exhausting, and exhilarating – it’s why I watch fictional media! And this show does it so damn well.

Of course, it’s all magnified with Soldier Boy. Ackles, if given even a crumb to work with, will pull you in and make you feel whatever the hell that character is feeling, whether you want to or not. I found myself cursing at the screen multiple times, overwhelmed with too many emotions, some that should definitely be mutually exclusive.

And, of course, they gave him a ton to sink his talented teeth into. You would think I would have been more prepared! (Not complaining, not even a little). Seeing our world through the eyes of a man who’s from another time – not to mention one who’s been through the unprecedented experiences that Soldier Boy has – is fascinating. Riveting. Ackles can show Soldier Boy’s suffering, derision, amusement or mystification with just a look, so we get to see it all. I’m trying not to be hyperbolic, but he’s amazing in this role.

That there are a couple of “Supernatural” Easter eggs in this episode that no one but a “Supernatural” fan would notice only amped up the emotionality for me. I think I might have yelled “Damn you, Kripke!” at least once. Sorry, Eric. Don’t ever stop.

There’s a lot of evolution in many of the characters in this episode, some of it the predictable slippery slope of trying to make nice with a homicidal narcissist, some of it an unflinching exploration of what happens when you get a taste of power and you’ve felt powerless all your life. That’s compelling for anyone, and the show doesn’t shy away from making that clear. Surprising, perhaps, what a taste of real power does to people – all people.

Homelander continues to consolidate his power base, his ruthlessness now knocking out even my little traces of empathy for him – that’s what narcissists do when cornered. Tell a narcissist that no one loves them and set the fuse on the powder keg is a theme we see played out in this episode more than once. And with my psychologist hat on, they got that one right.

There’s an interesting little theme running throughout this season that is very clear in this episode too about the cost of not being genuine – of pretending you’re okay with things you’re not. For some of the female characters, that has meant pretending to be into a man who was actually hated and feared, not loved. When there’s nothing left to lose, the truth comes out. I think most of us can relate to feeling the pressure to pretend you’re okay with things you’re not, and it seems like a strikingly relevant message when we look around at all the things that many people keep pretending are okay in the real world when they are clearly not.

This wouldn’t be “The Boys” if there wasn’t also an insane sequence that takes the emotions in a completely different direction for a few minutes, and also one that involves some sort of sex that’s vividly depicted, so don’t worry, this episode has those too!  Also, if you’re not shipping a couple of twosomes after watching this episode, I’m surprised. Especially if you’re a Supernatural fan.

Don’t miss the new episode of “The Boys” dropping on Friday – or, as Kripke teased, tonight if Jensen’s ass doesn’t break Amazon again!

And stay tuned for my spoilery wrap-up of episode 5 right here on the weekend! You know how deep FangasmSPN likes to go so be ready for a nice sit down with a good friend talking you through the episode.