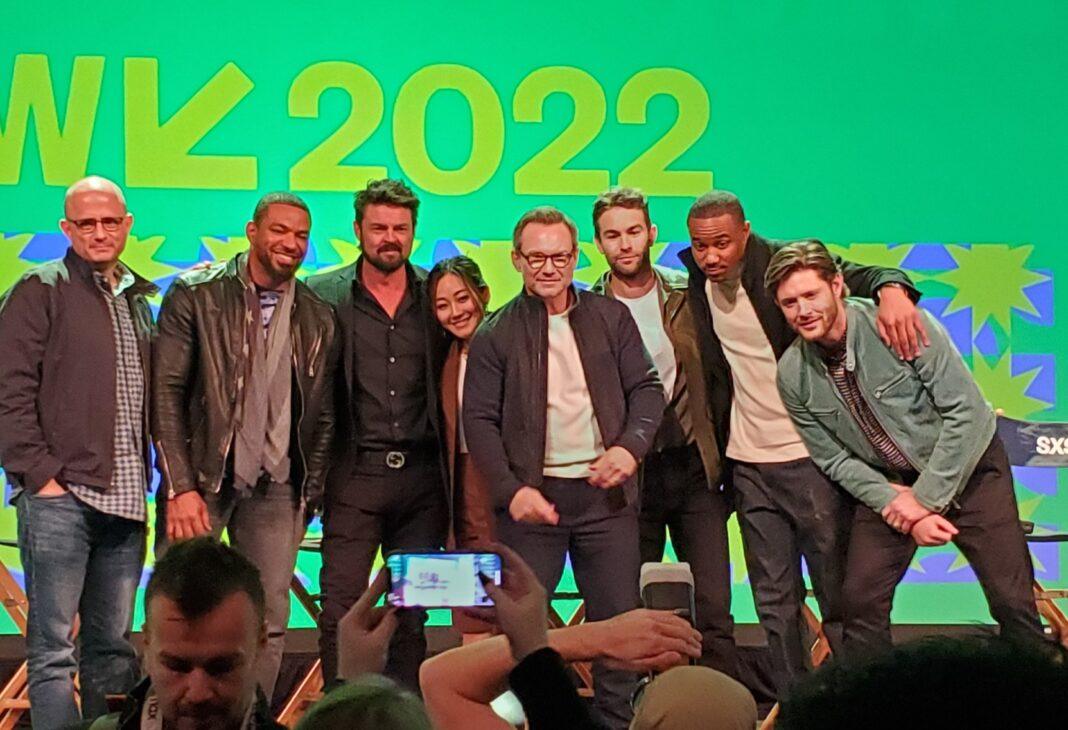 It felt a little like San Diego Comic Con at SXSW on Saturday morning, when “The Boys” panel took the stage. It wasn’t as large as Hall H, but Ballroom D is plenty big, and it was crowded with fans eagerly anticipating seeing the trailer for Season 3 and hearing from Eric Kripke and the cast. And they did not disappoint – they showed the trailer on the big screens and there were audible gasps from the audience.

For days, the fandom has been guessing that Imagine Dragons has joined “The Boys” family thanks to some twitter bantering, and the trailer confirmed that – perfect song for an amazing sequence of glimpses of what’s to come. From the unlikely musical sequence to Homelander’s disturbing fascination with milking a cow to the requisite blood and gore and humor mixed in, the trailer leaves little doubt that the new season is going to up the ante even over the last. Butcher’s laser eyes and Soldier Boy’s smirk are indelible images that make June 3 damn hard to wait for. And that last glimpse of an unkempt Soldier Boy breaking his bonds, just that look on his face….omg, bring it!

For “Supernatural” fans like me, having Eric Kripke and Jensen Ackles working together again is a dream come true. There was even a little “Supernatural” Easter egg in the trailer, with a ‘We’ve got work to do’ from-the-trunk closing shot that I loved. I am a die-hard “Supernatural” fan forever, but I fell in love with “The Boys” from the pilot episode and just keep being more and more fascinated and entertained by it.

Ackles, the “new kid” on the show who joins in Season 3 as Soldier Boy, said he was nervous about joining a show that he already was a fan of, and that he “geeked out” over his talented castmates.

Jensen: it was a thrilling ride to be on and I can’t wait for you guys to see it!

He definitely got maybe even more than he bargained for, which makes June 3 even harder to wait for.

Jensen: I thought we’re gonna level up here, gloves are coming off, it’s gonna be all the things I couldn’t do with standards and practices. And then I read the script and I’m like, I can’t do that!

He said he didn’t really know where his line was (of things he wouldn’t do for a role) – but Kripke found it for him.

Kripke: And then you did it…

And yes, now that he has, he admitted he might do it again. Whatever IT is!

Jensen also teased a little about the Herogasm episode that the fandom is eagerly anticipating, exclaiming “holy shit” – which I’m pretty sure is what all of us are going to say when we see it. Jensen didn’t say whether or not he was IN that scene, but he was on set that day. He asked the camera guy how he was doing, since he seemed a little troubled. Jensen asked him how he was, how it was going in there, and the guy just shook his head and said “man, I’ve seen some shit today…”

Jensen: and I just shook my head and said OH NO… so, good times…

I’d love to say that is in any way discouraging to me, but nope – cannot wait for that either!

Jensen talked about the very first scene that he filmed on this show.

Jensen: Like, welcome to The Boys, this is what you get to do. And it’s something that I’d never done before.

Jessie: is it something that you’ll do again?

Jensen: (lamenting) Well the ice is broken now, so probably.

Me: Ah, that bodes well for the future….

Karen Fukuhara said that one of the things she enjoyed in Season 3 was getting to show some humor – and apparently show off Kimiko’s fighting skills with a sex toy as a weapon. As you do.

There were some more serious moments in the panel too. Eric Kripke talked about how he writes for the very talented cast. I’m a forever fan of Kripke’s characters and shows, because he always prioritizes characterization and that’s frankly why I watch TV.

Eric: You write the character moments, first and foremost, because you know that they can do it, and we just give them space. I think it’s really uniquely actor forward for a superhero show because these guys are all so good. Outside of all the craziness, the primary goal is getting the best, most complicated performance out of everybody. They give them the takes that they want, the space that they need, because when you have such amazing talent you’d be crazy not to use it as much as you can.

Karl Urban agreed that it’s an extraordinary cast, and said that they all got very close quarantining and then filming in Toronto in the midst of a pandemic.

Karl: Every day I get to work with these guys, we have a lot of fun. In between takes, we’re all hanging out on the side of the set playing board games. We’re pretty tight. Every day is really fun.

The game they were playing? Backgammon. And apparently, Jensen Ackles started off pretending he didn’t know how to play.

Laz: Day one he showed up and he was losing, and I pulled Karl to the side and was like, I think he’s bullshitting us, man. I don’t believe this dude, I don’t believe him at all, look at him, he’s totally playing possum. And sure enough, one by one he started pickin’ us off. And now we had to send Karl in, like  beat that motherfucker, he’s good, he destroyed me! He’s a hustler!

Jensen just sat there and shrugged. And possibly smirked a little.

Kripke also said Season 3 is going to tackle the idea of toxic masculinity further, which I’m looking forward to.

Kripke: There’s this whole idea of being manly that’s poisoning the world.

See why I love this show?

Of course, there was some talk of blood and gore, because this is The Boys

Kripke said that having to clean up all the blood in between takes really factors into the shooting time. So more than half of what they do is CG now because of that.

Karl chimed in with some details about just how bloody things got at times.

Karl: When we shot that whale scene, you’d shoot your day, covered in blood from head to toe, then you’d go home and you’re ready to go to bed and you take your pants off, your Calvins are covered in blood! I destroyed like 5 pairs, so I’m sending you the bill for that.

Chace also wasn’t all that enthused about The Deep’s scenes where his gills feature prominently – which I don’t think surprises anyone!

Season 3 isn’t all blood and gore, though – the trailer teases some musical interludes, which Kripke is totally excited about (me too, especially if gifted composer Christopher Lennertz is involved).

Eric: I’m a huge fan of classic Hollywood musicals. To me Singing in the Rain is so good and I’ve always wanted to do a huge blow the doors off musical number.

They used Karen and Tomer’s story this season to do it, and the actors were psyched and rehearsed for a long time.

Eric: It’s so elaborate and there are so many dancers and the director Nelson is brilliant.  In the middle of this show to have a candy colored musical number, it’s one of my favorite moments of Season 3. The show is so cynical and to have a moment that’s so joyful, you have the biggest smile on your face when you watch it, it’s delightful.

Karen: I felt like I was on a totally different show!

Jessie shared his experience doing that memorable rap as A Train in Season 2, surprised by the production that it was – and it so worked!

Everyone said if they had to be another supe, they’d be Black Noir – because you could essentially fall asleep while being him. But then Kripke revealed that Noir is revealed this season! I’m excited about seeing another Supernatural alum onscreen – Nathan Mitchell’s been on the show all along, but this time actually SEEING him!

As the panel neared its end, there were questions from the audience. Someone asked each of them to describe Season 3 in a few words.

Chace: What the shit?

Another fan wanted to know, does this season top the whale scene?

Why do I not doubt that for a minute?

As the panel ended, new addition Jensen Ackles had a message for his colleagues.

Jensen: I just wanted to thank this cast and writing team and Eric specifically. This is just such a fun fun show to be a part of and you guys couldn’t have been more welcoming as a cast and as a family truly. It was lockdown up there, nothing to do but be with each other and I was thrilled, coming out of that, how much fun I had, so thank you all.