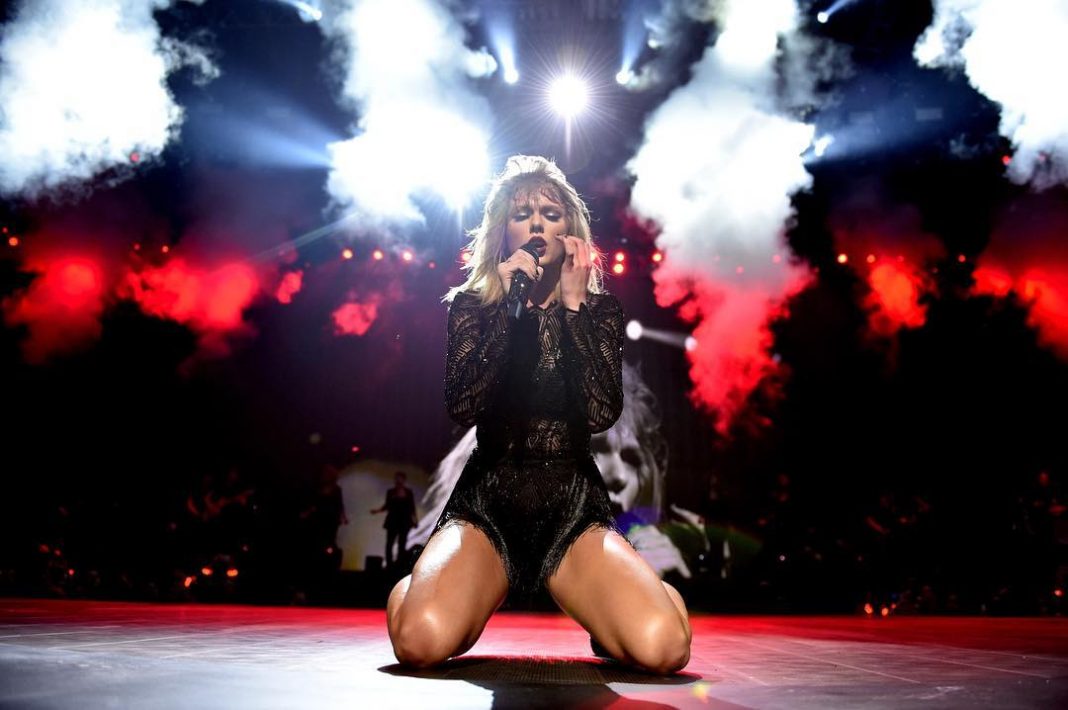 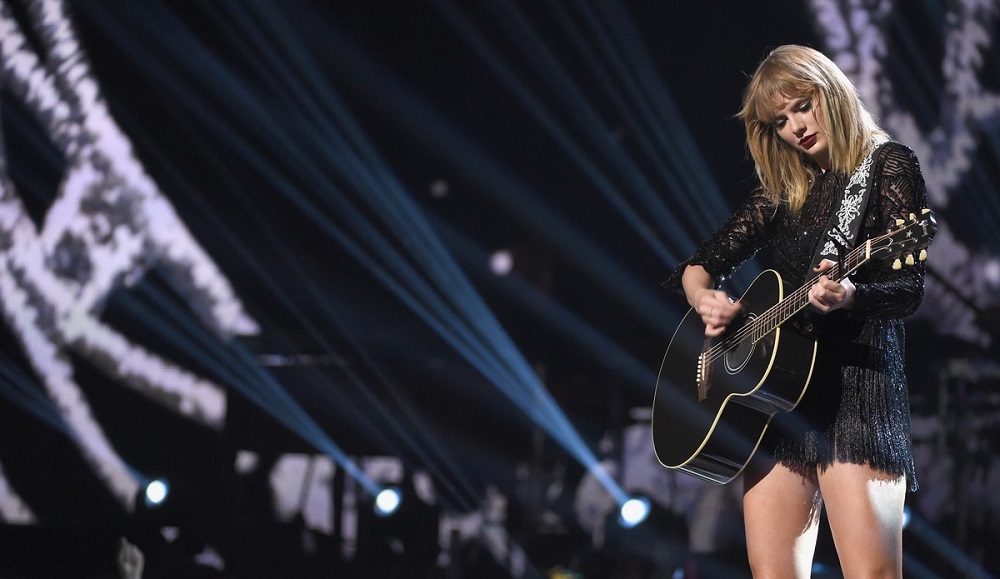 Sitting backstage in her dressing room with her cats, Taylor Swift was Instagramming videos of them while listening to her fans chanting “Taylor! Taylor!” Right before they started she could have heard DJ and good friend Ruby Rose calling out from her turntables inside the 62,500 foot pop up club (yup, they make em that big and it will be gone as quickly as it went up) in Houston “If you guys screen loud enough, Taylor will hear you.”

Moments later she emerged to see 9,000 over excited and screaming fans and performed a very tight and packed seventeen song set. She even granted her fans two surprises with two songs never performed before.

Swift gave a blowout performance leaving everything she had on the stage. With good reason, as it looks like this was her first and final concert of 2017.

It’s actually a smart move after the rough year of publicity she had in 2016 where fans began seeing a different side of the singer/songwriter. The more business savvy one and not the young woman who wants to be your best friend one. Taking this sabbatical will help fans miss her and forget all those misses like Calvin Harris, Tom Hiddleston, Kanye West and Kim Kardashian.

“Taylor’s a smart woman, and even she knows she let herself get overexposed, ” a long-time pr pro said. “When a celebrity heads into the land of overexposure, fans begin to take them for granted and begin to notice their flaws. When you disappear for a period of time, it gives them a chance to miss you and forget those flaws that were shown.” 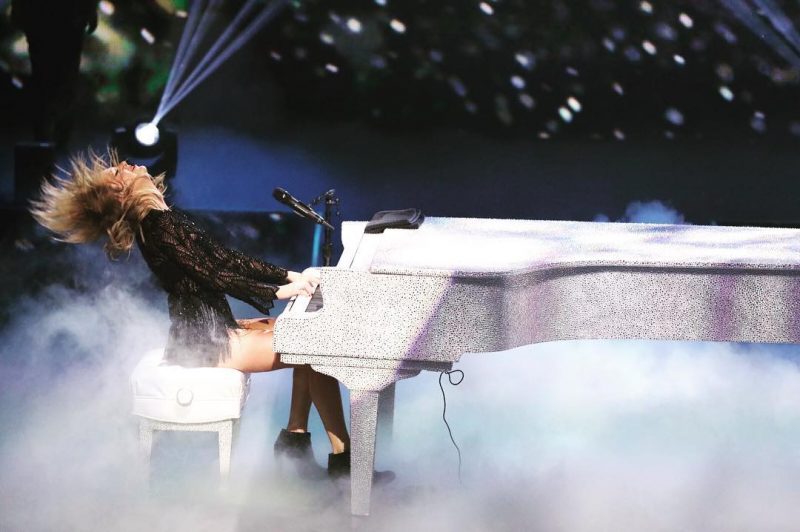 Here’s the highlights from her pre-Super Bowl 51 show.

Going It Alone
“I don’t want you to think Zayn is going to come out, because he’s definitely not,” Swift immediately cautioned while introducing “I Don’t Wanna Live Forever,” her Fifty Shades Darker collaboration with the One Direction alum. “I saw a lot of phones go up in the air. The only one you have here is me, I’m so sorry.” The crowd didn’t seem to mind, helping Taylor out with the oh-oh-ohs during her stripped-down take on the steamy song.

Little Big Taylor
Another live debut was “Better Man,” the Hot Country Songs No. 1 that Swift wrote for Nashville quartet Little Big Town. Not only has she never performed it live, we’ve never heard her sing it ever. Swift made epic use of her background singers for the performance, having them join her out on the circular stage and creating her own vocal group, a la LBT. “I never really knew what it would feel like to hear my song on the radio and have someone else singing it. Turns out, it feels awesome,” she said before the song. “I feel really grateful to the artists who have decided to record the things that I have written. The one drawback is just that you don’t really get to hear the crowd sing the songs back to you.” This intro also led into an acoustic take on Calvin Harris and Rihanna‘s “This Is What You Came For,” which she famously wrote with her EDM ex.

On Theme
There’s a Taylor Swift song for every occasion — even Super Bowl. “I figured you guys are going to be watching football, and I wrote a song when I was 16 that features, like, cheer captains and bleachers, and I don’t know, I felt like it might be appropriate to play tonight,” she said to introduce her 2008 crossover smash “You Belong With Me.” “I mean, it’s really old, but…”

Grammys Flashback
For Swift’s last concert, at October’s Formula 1 U.S. Grand Prix in Austin, Texas, she apparently faked out a few fans when her bedazzled white grand piano rolled out onstage. “When I sat down at the piano, a lot of people were chanting the name of a song I haven’t played in a long time. You know what I’m talking about?” she asked, referencing her famous hair-flipping 2014 Grammys performance of the Red track “All Too Well” behind the keys. “So I figured that next time I was in Texas, if you wanted to hear ‘All Too Well,’ I would play it.” And so she did, re-creating the hair-eography that made the original performance so memorable (and meme-able).

Parking Lot to Paradise
When Swift’s multi-year deal with AT&T was announced back in October, one of the most exciting aspects of the partnership was the promised Super Saturday Night performance, portions of which will stream on DIRECTV’s Taylor Swift NOW at later dates (so don’t worry if you didn’t have the golden ticket in Houston). And the fact that the Club Nomadic venue — which also hosted Bruno Mars, The Chainsmokers and more artists over the past few days — was constructed out of thin air allowed for a lot of customization. “Literally, this was a parking lot in October,” Roger Hyde, DIRECTV/AT&T Entertainment Group SVP of creative services, told Billboard before Saturday’s party. “It literally was nothing. All they wanted was that it had a nice view of downtown Houston, and it had good access, and we had the opportunity to build something this big. Knowing what [Swift’s] folks wanted to do as far as the stage was concerned, we could build it around her. It’s literally a custom environment. It’s very intimate — as big as it is, it’s very intimate. No matter where you are, you’ll feel very close to her. And no matter what camera angle you see the footage from, there will be fans in the foreground and the background. She’s going to be surrounded by her greatest fans.” That setup included a video screen that spanned the entire stage, a circular platform in the middle of a sea of her supporters and a few well-timed bursts of pyro that kicked up the already-hot performance.

Only 2017 Show?
Did Texas once again score Swift’s only show of the year? Last year, her Grand Prix performance in Austin was her one-and-only live event of 2016. And she seems to think this could be it for this year — at least for now. “I have to be really honest with you about something: As far as I know, I’m doing one show in 2017. And as far as I know, this is that one show,” she said to wild cheers. “So what I’m trying to tell you is, by coming here tonight, you’re essentially attending 100 percent of my tour dates for the year, so thank you! You’re the crowd in my most recent daydreams, when I’m thinking about being onstage, so I was wondering: If you don’t feel like dancing for yourself or screaming for yourself, you don’t feel in the mood or whatever, you’re like stressed out, would you do it for me tonight?”

Speaking of Dancing…
Anyone who has watched a music awards show in the past five years knows Swift loves nothing more than to get her groove on. So we all knew how this party had to end. “Houston, would you like to dance?” she asked before her final number “Shake It Off” left fans dancing out the doors and into the crisp Houston night.

Taylor Swift’s set list for AT&T Presents DIRECTV NOW Super Saturday Night:
New Romantics
22
Blank Space
I Knew You Were Trouble
Style
I Don’t Wanna Live Forever
You Belong With Me
This Is What You Came For
Better Man
Red
We Are Never Ever Getting Back Together
Love story
All Too Well
Enchanted/Wildest Dreams medley
Bad Blood
Out of the Woods
Shake It Off 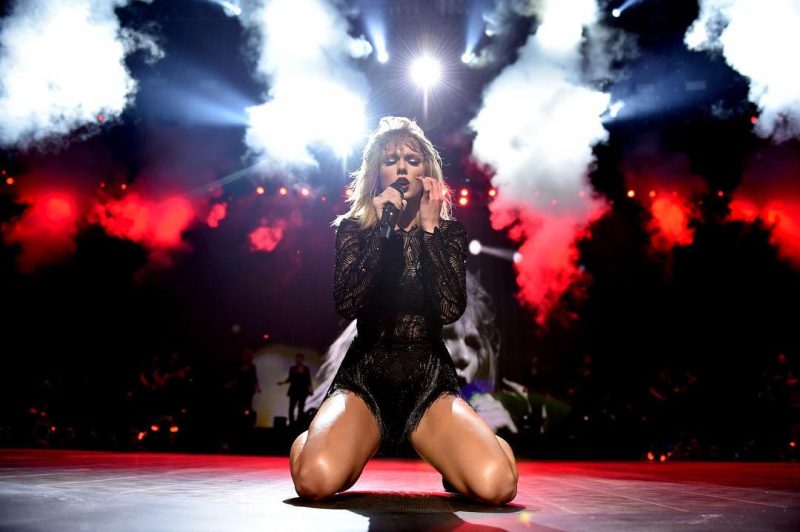 Taylor Swift’s pre-Super Bowl concert broke some news: She announced it may be her only concert of this year; she performed for the smallest number of fans in some time – 9,000 people is intimate for this pop star – and she sang her newest single live for the first time.

She also made some references to football during the 90-minute show, telling the crowd about her early country-turned-pop hit, “You Belong With Me,” with lyrics about high school cheerleaders, bleachers and boys.

“It’s good to be in Houston, Texas tonight,” she yelled.

She worked the stage from the left to right, and strutted up the middle platform to sing closely to her feverish fans at the annual DIRECTV NOW Super Saturday Night – where past performers include Justin Timberlake and Rihanna.

“I swear you don’t. You don’t want it,” Swift said after fans begged for the towel she used to wipe the sweat from her forehead.

Swift also debuted the live performance of “I Don’t Want to Live Forever,” her Top 5 duet with former One Direction member Zayn from the “Fifty Shades Darker” soundtrack.

The crowd – full of Swift’s fans 18 and over – roared loudly, in hopes Zayn would appear. “He’s definitely not (here),” she assured them.

But she asked the audience to sing along, as she stripped the song to acoustic form, strumming her guitar.

She also slowed things down when performing songs she wrote for others – saying it was one of her biggest accomplishments of the last year. She sang a soft version “This Is What I Came For,” the EDM hit she wrote with former boyfriend Calvin Harris (Rihanna’s vocals are on the original). Swift also sang “Better Man,” a recent No.1 country hit she wrote for Grammy-winning group Little Big Town.

Swift’s last tour was a stadium trek with 60,000 seats. The singer, who won the album of the year Grammy last year for her first official pop album “1989,” said the pre-Super Bowl show would likely be her only one this year.