Home Reviews Cool Stuff Reviews System Mechanic : A Must Have for Computer Defense 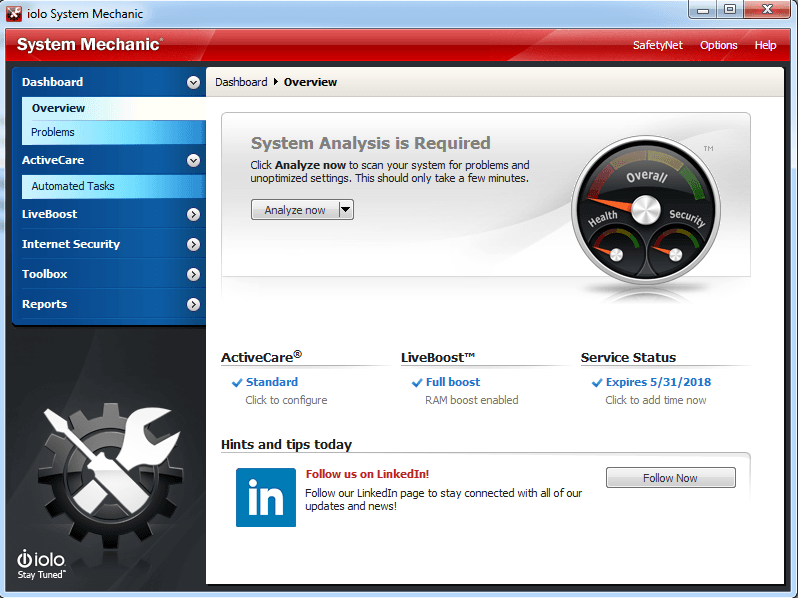 System Mechanic is a fantastic software that is produced by Iolo and available for use with Windows XP, Windows 7 and Windows 8.

The tool works alongside your existing antivirus programs and provides some additional services including performance management, system clean-up and also works to tighten the overall security of your system making it much harder for viruses to get in to start with.

The installation of system mechanic takes just a couple of minutes and unless you are an advanced user there is nothing to think about – it’s just a case of following an install wizard and accepting all of the default settings. 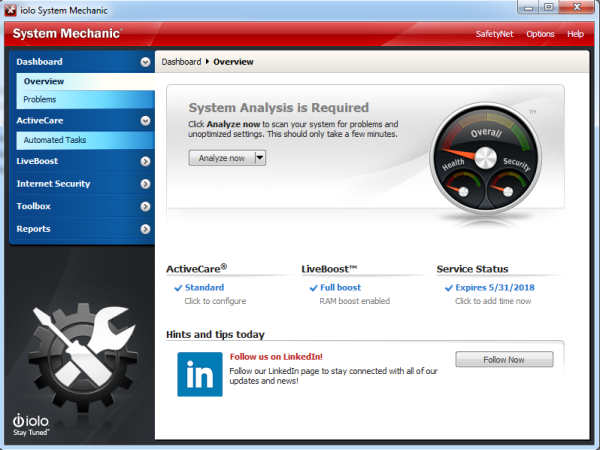 Most importantly on this dashboard you will see a notification that system analysis is required – this is basically the program asking to do an initial scan of your system where it will assess the overall state of your computer and will highlight any performance or security issues that are currently present in the system as well as providing recommended resolutions for each issue that is found.

Clicking on analyse now will start this process at the end of which you get an easy to understand list of the issues found. Once you are presented with any issues you have the option of looking at the issues one at a time and decided whether to go ahead with the suggested resolution or simply accepted all of the recommendations and letting system mechanic do its job – we chose the later. 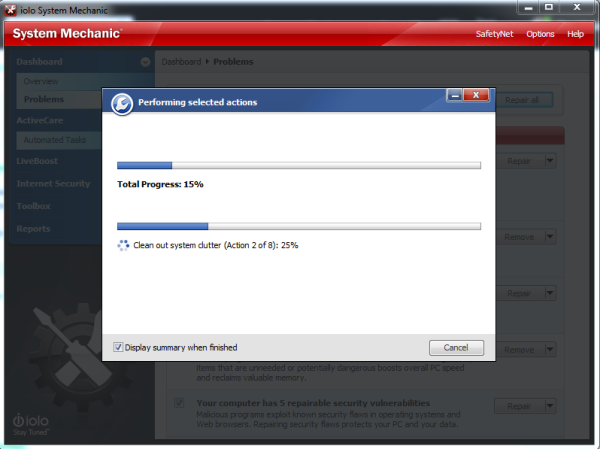 When we tested the software this initial clean-up consisted of 8 stages and performed actions such as clearing out all temporary files on the system and implementing some advanced security measures to make the system less vulnerable to attacks.

One of the most useful tools that will be presented to you as part of this initial clean-up is the windows start-up optimization wizard. This wizard looks at all of the programs that are configured to start up when you turn on your computer and presents you with some very easy to understand information about each one. The best part is that next to each start up program you will see two ratings from the community of system mechanic users showing how many users elected to keep each program installed and how many chose to remove each program. This makes it very easy to see programs that are generally considered to be bad for your computer.

Once the initial clean-up has completed system mechanic will then continue to run in the background performing regular checks on your computer in terms of performance and security and will flag any issues that arise along the way.

During testing we added some spoof entries to the computer’s internal DNS table – a common way in which viruses and Trojans force users to unwittingly visit fraudulent or malicious websites – and were very impressed to see that system mechanic picked up this activity and instantly removed these entries from the system.

The main advantage of system mechanic is that it keeps your system clean, removes unwanted programs and also monitors activity for any vulnerabilities that wouldn’t normally be picked up by your antivirus protection but there are also some other cool features including LiveBoost which is a proprietary feature of system mechanic and works with your PC to optimise CPU, memory and disk activity in order to ensure the best performance is always being leveraged by your machine.

Overall the program is a very effective tool that can work in conjunction with your antivirus and other security programs that will increase the performance and the security of your computer. The program manages to carry out all of these tasks with as little interaction from the user as possible whilst also providing enough information to enable you to understand and threats that do arise and what has been done to secure those threats.

As a plus, one of you lucky readers can get your hands on a free copy of System Mechanic by just Tweeting about it to us @movietvtechgeek with hashtag #SystemMechanic & #MovieTVTechGeeks. That’s it and we’ll select a winner by July 20, 2015.