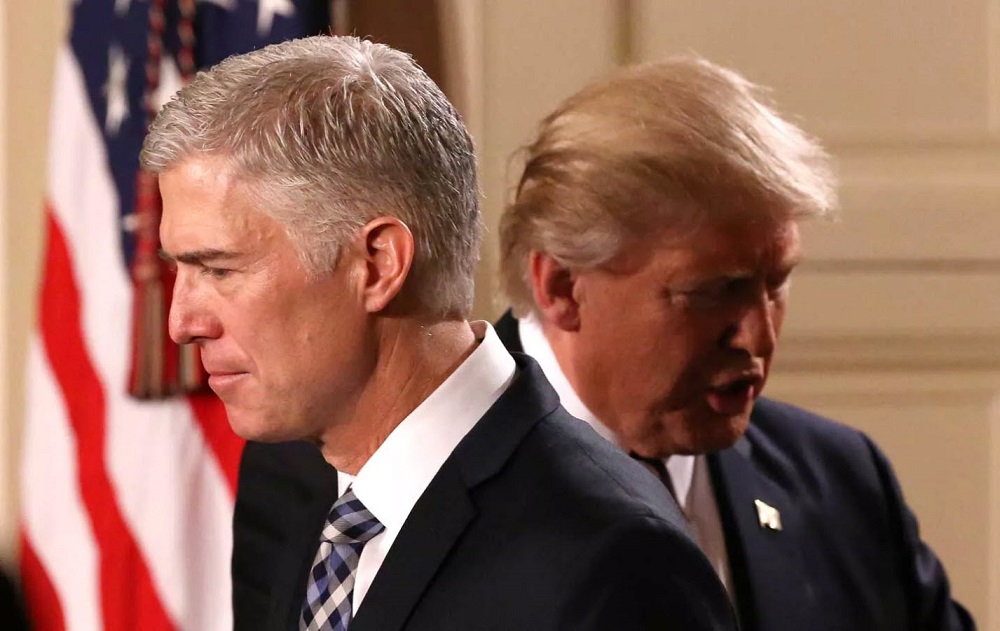 President Donald Trump definitely made a smart move of picking Neil M. Gorsuch as his Supreme Court nominee to take media attention off of his disastrous ‘ban’ weekend.

In what felt like a DC version of “The Bachelor” rose ceremony with Trump’s build up to Tuesday night (and he even chose primetime for this announcement), the president plugged Gorsuch’s “brilliance,” qualification and academic achievement, but he left out the part that the guy truly looked the part.

Interesting since that’s how Trump referred to his military leader picks. “These are central casting,” he said. “If I’m doing a movie, I’d pick you general, General Mattis.”

Gorsuch truly looks the part from his height to his square chin, with a conservatively trimmed but very healthy shock of gray hair that gives him a reassuring gravitas that his youth (he’s 49) might otherwise belie. (His hair also looks a lot like that of Mr. Pence.) The federal appeals court judge, now based in Denver, telegraphs seriousness of purpose and manliness in the classical mode. In the biopic of the Trump administration that will no doubt come one day, he would be played by a Paul Newman type.

As he stood beside the president on Tuesday, wearing a sober, well-tailored suit with a pure white shirt and a neutral black, white and blue plaid tie — no partisan red — Judge Gorsuch played his current role to perfection, casting his eyes upward as if in search of higher thoughts, and then down to acknowledge the humility he would later express in his acceptance speech. Standing next to him in a simple white shirt and brown skirt, eschewing frippery, was his wife, Louise, looking equally grounded.

It was easy to picture him on the highest bench in the land. Aaron Spelling could not have designed it better.

This is not to say in any way that Judge Gorsuch’s image is more important, or matters more than his substance and record. But in an administration that places a premium on image (think about the arguments over the pictures showing crowd size at the inauguration), it’s hard to think it doesn’t matter at all — especially as we embark on what will most likely be a fraught confirmation fight. Because for Americans who tuned in to the announcement on Tuesday, or who will see the pictures of the nominee (most of which have a strange, soft focus) but probably will not bother to research the jurisprudence, his look may be convincing. In a branded, visual world, his brand is justice.

This is a reality the president understands as viscerally as anyone who has ever held his office. It’s easy to make fun of it. But we dismiss its effectiveness at our own risk. 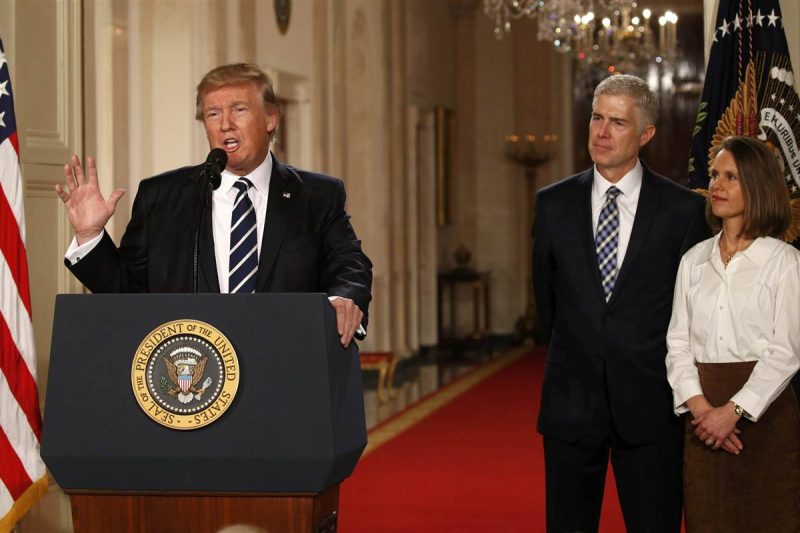 If confirmed by the Senate to the Supreme Court, Neil Gorsuch would fill the seat of the man he seeks to emulate as a judge.

He would be the first justice to serve alongside a colleague for whom he worked. Gorsuch described his former boss, Justice Anthony Kennedy, Tuesday as one of the judges who brought him up in the law.

President Donald Trump nominated Gorsuch to fill the seat of Justice Antonin Scalia, who died nearly a year ago. Trump said he was delivering on his pledge to choose someone in Scalia’s mold.

Gorsuch, a federal appeals court judge in Denver for the past 11 years, said he adheres to Scalia’s approach to the law, evaluating the Constitution and laws by how they were understood when they were written. He also shares with Scalia a flair for writing.

But unlike the sometimes irascible Scalia, Gorsuch approaches his work with a courtly manner more reminiscent of Kennedy.

Jeffrey Rosen, president and CEO of the bipartisan National Constitution Center in Philadelphia, has known Gorsuch since they worked as clerks on the federal appeals court in Washington, though for different judges.

“His opinions stand out for his prose and analysis, and he gets along really well with both sides,” Rosen said.

In a book Gorsuch wrote laying out the case against assisted suicide and euthanasia, Rosen said, Gorsuch was careful to avoid making a religious case for his views, focusing instead on philosophy.

“He has been careful not to say what he thinks about abortion or marriage equality,” Rosen said.

In any event, with Kennedy remaining on the court, there are five votes to preserve abortion rights and gay rights, no matter Gorsuch’s views. Should Kennedy, 80, or liberal justices Ruth Bader Ginsburg, 83, or Stephen Breyer, 78, leave the court in the next four years, Trump then would have a chance to appoint a justice whose vote could perhaps flip the court on abortion, gay rights and a range of hot-button issues.

It’s unclear how quickly majority Republicans might be able to move Gorsuch’s nomination through the Senate or whether Democrats will try to block him. Gorsuch could join the court in time for the last arguments of the term in the spring.

The court currently has before it a case about the rights of transgender students, though the case could end up being returned to a lower court without a full hearing in the high court. Next term’s big issue could be whether some partisan redistricting violates the Constitution. Critics of labor unions also are likely to bring before the court a case that could damage the financial viability of unions that represent government workers, an issue on which the court split 4-4 after Scalia’s death.

From his time on the appeals court, Gorsuch’s notable opinions include defense of religious freedom. In two cases that involved the contraception mandate under the Obama health care law, Gorsuch sided with businesses and non-profit groups that voiced religious objections to the requirement that they provide cost-free contraception to women covered under their health plans.

Gorsuch also has written opinions that question 30 years of Supreme Court rulings that allow federal agencies to interpret laws and regulations. Gorsuch has said that federal bureaucrats are allowed to accumulate too much power at the expense of Congress and the courts. Those rulings “permit executive bureaucracies to swallow huge amounts of core judicial and legislative power and concentrate federal power in a way that seems more than a little difficult to square with the Constitution of the framers’ design,” he wrote last year. Justice Clarence Thomas has raised similar concerns.

Notre Dame law professor John Copeland Nagle said he sees an irony in Trump’s selection of Gorsuch. “Who would have guessed that President Trump’s most important decision in his first weeks in office would be to limit his own power?” Nagle said. The choice of Gorsuch “does just that.”

In background and style, Gorsuch resembles the group he may soon join. He would be the sixth member of the bench to have attended Harvard Law School; the other three have law degrees from Yale. Seven of the eight justices previously served as appeals court judges, Gorsuch’s current job. He was a Supreme Court law clerk, along with three other justices.

While he is a native Coloradan, Gorsuch spent his high school years in Washington because his mother, Anne Gorsuch, was EPA administrator during the Reagan administration. At 49 years old, he’s the youngest nominee since Thomas, who was 43 when he joined the court more than 25 years ago.

Gorsuch differs from his prospective colleagues in one respect. On a court with five Catholics and three Jews, he would be the lone Episcopalian.