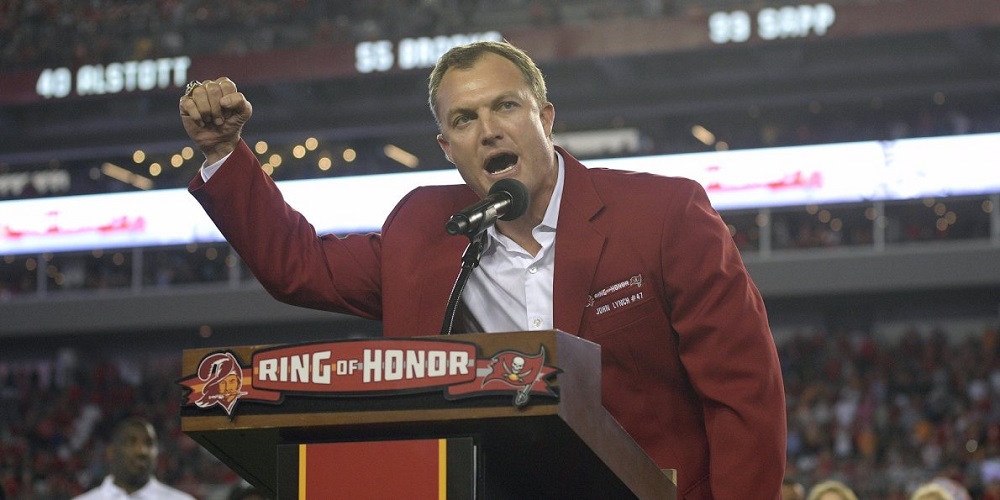 San Francisco 49ers Step Outside the Norm Hiring John Lynch as General Manager, Plan to Pair him with Kyle Shanahan

The San Francisco 49ers have struggled since head coach Jim Harbaugh left after the 2014 NFL season. The Niners played in three NFC Championship Games and Super Bowl XLVII under Harbaugh; however, the team has managed only seven wins in the two years since under coaches Jim Tomsula and Chip Kelly.

49ers CEO Jed York grew accustomed to winning under Harbaugh, and the poor performances over the past two seasons have both led to firings. Now, York is reaching outside of the box in an effort to get back to winning, hiring former NFL safety and FOX analyst John Lynch as general manager.

Lynch, a finalist for the Pro Football Hall of Fame Class of 2017, helped lead the Tampa Bay Buccaneers to a Super Bowl championship back in 2002. Though he has never held a front office position with a professional football team, Lynch received a six-year deal. York plans to pair him with Atlanta Falcons offensive coordinator Kyle Shanahan, who is expected to be announced as the 49ers’ next head coach as early as Monday after Super Bowl LI.

“Nothing is guaranteed,” said York of the unprecedented hiring of Lynch. “But so many opportunities are missed in the NFL because people don’t want to do something different. We’re okay with that because I am confident in Kyle and John. John has watched John Elway and how he’s built a team in Denver. As easy as it is to say he hasn’t built a team yet—I get that—I talk to Kyle, and he says John is the most prepared of all the TV [people] he meets in the production meeting before games. We understand we’ll have to live with growing pains, but I’m willing to do that because I believe the upside with both of them is so great.”

While Lynch may be qualified, there are plenty of more experienced candidates available. York may be reaching too much on this one, but we’ll have to wait and see.

I also closely watched Elway assemble on of the best teams in history. Maybe the Jacksonville Jaguars will hire me.

Steve Young, not shy with words or speaking up and out, had this say about the 49ers bringing on John Lynch.

Bear with me. So the 49ers from ‘81 to ’98 or however you want to say it, people always say those were the glory years, great things happened, great players and Super Bowls and everything else. But fundamentally what happened, what came out of in light, I call it the enlightenment era. For football in general, especially the 49ers, 10, 15 years ahead of everyone else, it’s not just on the field, because we know what the west coast did, we know what Bill [former 49ers head coach Bill Walsh] did, but it was also an era of enlightenment on how we treat players. How we train them. We actually have them drink water. We don’t try to put them in the heat. We travel well, watch out for them.

I’ve said this on the show before, but the first meeting Bill ever had in the fall training camp was, “We’re going to integrate this team.”

And everyone thinks, well that’s racial, I’m sure that’s what he’s talking about.

And he said, “No, I’m going to integrate in every way that keeps people apart. The little cliques that people form where there’s social-economics, geographic, language, religion, what school you went to, what position you play. Everybody hangs out in their group, and if you’re not careful, you’re going to have groups of people that are the team, that don’t know each other. And I’m going to integrate you guys. I’m going to integrate you in the locker room. There’s not going to be putting people in certain places; on the buses, on the planes, or in the lunchroom.”

Long before Marc Benioff made himself famous at salesforce.com for going to the lunchroom and shooing everybody off and going to meet others to integrate, Bill was doing it back in the late eighties. So in many ways, we were forced to get to know each other. You come in as a quarterback between two-a-days, and you’re having lunch and you’re just tired, and Bill would come in and say “Look, you guys gotta…” and you knew what you had to do—you picked up your tray, go over and talk to somebody else, and go meeting them.

Now, it’s not just a number or a name on the back of a jersey. You got to know them, and his feeling was, if everybody is cross-fertilized, then when you’re at Lambeau Field, and it’s down by four in the 4th quarter on 3rd and 10 and you got a 1:25 left, you get in that huddle, and you look at each other. Because football really is unnatural and we talk about this all the time: Why do we play? We play for each other. Ride or die, you know we heard that a lot. So if you’re more integrated, there’s more connective tissue between us? You’ll play better. You’ll be better in those moments. Bill was ahead of the game, well ahead. And what the 49ers did for many many years was well ahead. It was that period of enlightenment.

So what happened was when it ended, people picked up on it. People left with that toolkit. Mike Holmgren goes to Green Bay, Andy Reid gets that toolkit, he understands intuitively what that says and what that means, he goes to Philadelphia now is in Kansas City. Pete Carroll kinda wanders around, he has the toolkit and picks up a little holistic approach in Seattle. It goes on and on. Denver: Mike leaves, takes the toolkit and immediately makes the difference for a team that was really good and wins multiple Super Bowls. As people went out and did this, we in 2000, tended to start to go away from it. We would hire Dennis Erikson. People didn’t have that rootedness in this period of enlightenment. We just didn’t. Mike Singletary epitomized it, the famous player, a linebacker from Chicago. There’s no connectedness at all. It was hard to watch; it was hard to be a part of. Mike Nolan?

Again it’s not about the Super Bowls or even the guys. Stop saying “Ah Steve or Joe or Jerry or anyone else” It’s not about the people. It’s about what was rooted in it. Why it happened. It’s been proven to me since the last 15 years, the teams that took it and really have embraced it have been on the upper echelon for the whole period of time.

Then Jim Harbaugh comes, and Jim Harbaugh is like, I don’t want to say the bastard son, but he’s associated, he knows it, around it, he’s like a distant cousin. He’s around it enough; Stanford, Bill, you could see he understood it intuitively. He had his own take on it. And that’s why, I remember you guys telling me on the air, I was like Hallelujah. So that gets us here. Thanks for letting me build that bridge:

Because John Lynch is one of the best guys I know. Great human being. Fundamentally as a communicator, as a person, really a phenomenal guy. We’re going to make him an honorary Niner. He’s not a Niner, but it’s kind of like me at Stanford. I’ve been on the Stanford Hospital board for 10 years. I go there all the time because I think if I’m over there long enough they’ll think I replaced John Elway. They’ll actually believe I was a part of it. We’re going to bring the same thing for John [Lynch]. He’s now an honorary Niner, because John really does epitomize, and I think he learned a ton of what fell out, came out and rooted out of what the Niners did in those years, that affected what happened in Denver. And I think John Elway takes advantage of that. It feels the same way when I’m in Denver; it feels the same when I’m in Philadelphia especially in Kansas City and Green Bay and Seattle, it feels the same. It feels very much the same in New England. It comes from a different, that’s a whole interesting thing we’ll talk about some day, but it also feels very much like what they do in New England.

So to me, John is a guy, it feels like we’re getting back to that rootedness. And Kyle again, one generation away from Mike who definitely understands that and gets that rootedness as well. That’s why the fans, probably don’t realize this, but that’s why it’s been so hard. Especially people that were around him in that time period. You’re talking about a magical time, it wasn’t necessarily about the guys or the coaches. It was about what we were doing and how unique, and again enlightened it was. It drew people in; the fans were involved we were great communicators. All that works together.

So you’ve got to hope now, that despite it not being a direct relationship — but enough that you’ve got honorary members that understand winning in the league. That rootedness is still dominant wherever it took root. And now, I feel like with this, we can replant it, and see that success.

There’s things I fear because I know people say, “control doesn’t necessarily mean total control.” I think they are going to work together, hopefully, but that’s how it worked out in the past. We hope that does work. I think John will find connections. He’ll figure out ways to make it work, collaborate. Everybody will try to make everybody successful. The truth is, neither guy has had the job, neither guy has a clue on how to be a coach or a general manager. They’ve never done it. So there’s no way to analyze, there’s no way to say “I have an opinion.” You can’t have an opinion; they’re just warming up. They have no idea. Again, I’m sorry to talk so much, but I harken back, what makes me, I’m not going to say emotional, but emotions on what I experienced and how much I wanted to be a part of what we’re doing here. And this is as much as I’ve seen of doing that.

So there you have it, Steve Young summed it all up for both the San Francisco 49ers and John Lynch.