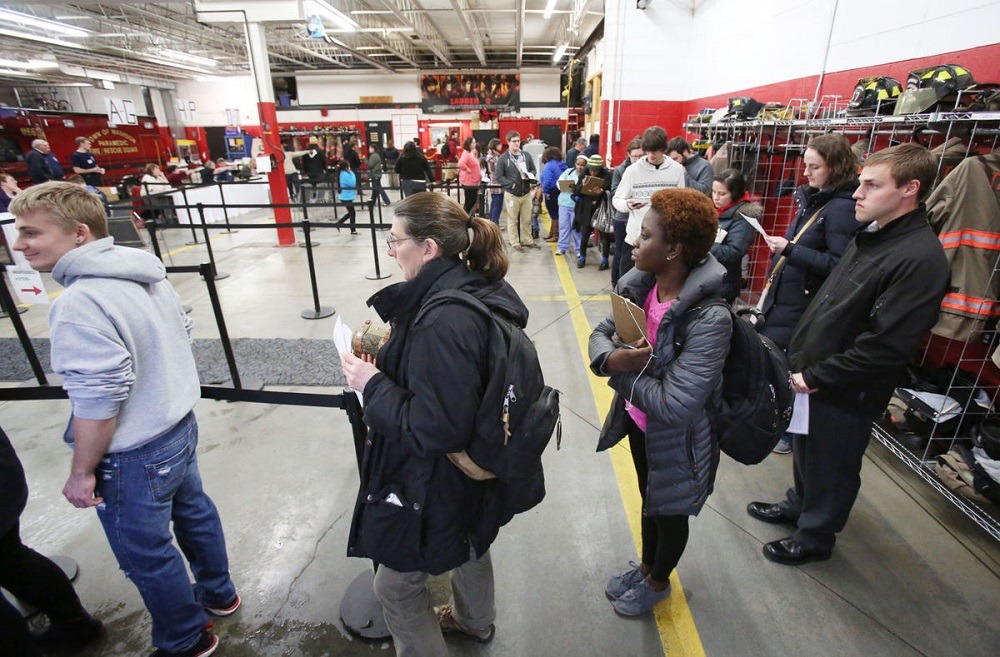 Since each state sets its own rules and regulations for voting, it’s not always easy to know which ones are causing the most confusion with obstacles that seem impossible to overcome.

Just this week, Donald Trump began accusing Virginia Governor Terry McAuliffe of acting ‘illegally’ when he returned voting rights to convicted felons who had served their sentences. If it weren’t for Trump raising a commotion, many people wouldn’t even have heard about that.

Sadly, that’s how much of the voting process works, so it’s up to each of us to figure out how to do it in the state we reside.

More than a dozen states have enacted tougher requirements for registering and voting since the U.S. Supreme Court overturned a key provision of the Voting Rights Act three years ago.

That has led to confusion and claims that certain groups, mostly minorities who tend to vote with Democrats, are being disenfranchised.

Adding to the uncertainty is a call by Republican presidential candidate Donald Trump for his supporters to monitor the polls on Tuesday for voter fraud and concerns by the federal government that hackers could try to disrupt the voting or vote-counting process. 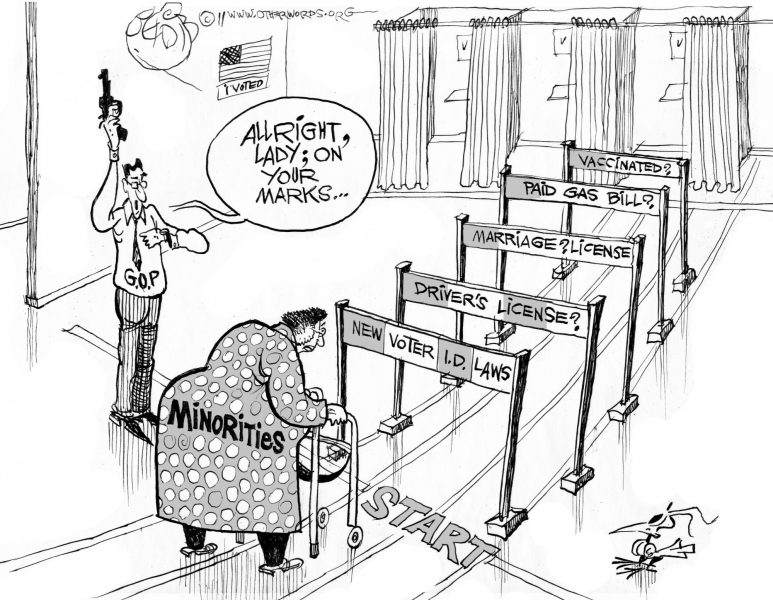 Here is a breakdown of some of the top voting concerns in key states:

This is the first presidential election in Alabama in which voters will be asked for photo identification. A lawsuit challenging the voter ID law is pending, with trial set for next year. The plaintiffs have argued the law disenfranchises voters who are unable to obtain a state-issued ID. Last year, 31 state driver’s license offices – many in poor, minority communities – were closed because of budget concerns. Most were open one day a week and now they are open one to two days a month, with critics complaining the reduced hours remain a barrier.

Long lines led to frustration during Arizona’s March primary, when some voters in the Phoenix area waited hours to cast ballots after county election officials opened 60 polling stations – fewer than half what is typical. On Tuesday, Maricopa County, which includes Phoenix, plans on having more than 700 sites. Meanwhile, state Democrats filed a lawsuit alleging some Republicans are planning to intimidate voters at the polls. Arizona also was one of two states in which hackers over the summer attempted to breach voter registration systems.

During the 2012 presidential election, Florida had the longest average wait time among all states – 45 minutes, according to the Pew Charitable Trusts. Some of the most populous counties have since expanded early voting hours in the hopes of reducing long lines on Election Day.

Meanwhile, legal battles continue over voter registration. After Hurricane Matthew raked Florida’s eastern coastline, Democrats sued to extend the deadline for voters to register. After a court order, about 107,000 people registered during the extension, but there was a concern that not all those applications would be processed before early voting began. A federal judge declined a request by Democrats to force election officials to allow those affected to vote even if their registration had yet to be verified, saying those affected could cast a provisional ballot that may be counted once their eligibility is confirmed.

The state’s process for handling voter registrations and maintaining its voter lists has been the subject of lawsuits this year. One pending lawsuit was filed against Secretary of State Brian Kemp over a policy allowing for people to be removed from state voter rolls for failing to vote in recent elections. Lawyers in the Georgia case said roughly 372,000 voters were purged between 2012 and 2014.

Civil rights groups also sued Kemp’s office over a policy they said had prevented tens of thousands of residents from registering to vote and violated the federal Voting Rights Act. The policy rejected applicants whose identifying information did not exactly match state or federal databases. Kemp’s office informed the court in September that it had changed the policy. Meanwhile, long lines have been reported in some places since early voting began Oct. 17, including a four-hour wait in one metro Atlanta county on the first day.

Indiana State Police have said they are investigating some voter registration applications submitted by Patriot Majority USA, a Washington, D.C.-based voter mobilization group with ties to the Democratic Party. The probe is examining whether some applications contained forged signatures or other possible elements of fraud. Attorneys for Patriot Majority have asked Justice Department’s Civil Rights Division to look into whether the investigation is an attempt to suppress the votes of black residents. The group has run voter registration drives in 11 states in previous years.

Separately, Secretary of State Connie Lawson, a Republican, warned recently of widespread voter registration fraud after her office found a heavier than usual number of changes to voter registration records. She later tempered those remarks to say that many of the thousands of changes simply could be residents rushing to correct their names or birth dates online ahead of the election.

A Kansas court fight focused on whether a group of as many as 50,000 residents could vote because they did not submit citizenship documents, as required under state law when registering at motor vehicle offices or with a federal form. Federal courts had previously ordered the state to count their votes in federal elections. The secretary of state’s office had sought to toss out their votes in state and local races, something a state judge has since blocked.

The state’s 2016 primary was marred by widespread reports of people in Brooklyn saying they were unable to vote. This happened after about 126,000 Brooklyn voters were removed from voter registration lists or deemed inactive between November 2015 and April of this year. Just days before the presidential election, a lawsuit was filed claiming the New York City Board of Elections had improperly removed voters from the rolls.

In 2013, Republican lawmakers in North Carolina passed a package of measures that required voters to show photo ID, reduced early voting and eliminated same-day registration during the early voting period. In July, a federal appeals court struck down several parts of the law, saying they “target African Americans with almost surgical precision.” Republican officials have said discrimination was not their intent. A divided U.S. Supreme Court declined in August to take up the case.

After the ruling, Democrats raised the alarm when the executive director of the state Republican Party emailed GOP activists suggesting each county election board’s Republicans work to limit early voting hours, curtail Sunday voting and avoid placing voting sites on college campuses. This set up a battle over early voting plans in a third of the state’s counties.

The dispute ultimately was resolved by the state Board of Elections, which restored Sunday voting in a few counties where local officials had sought to eliminate it and expanded hours in counties where the proposals seemed too limiting. But civil rights groups remained concerned that reductions in some places along with confusion over the photo ID law could affect turnout among black voters.

A week before Tuesday’s election, the state chapter of the NAACP filed a lawsuit alleging thousands of people, many of them black, had been removed improperly from voter rolls after being challenged by private citizens.

A federal judge ruled in October that voters who were wrongfully removed from Ohio’s registration lists can cast ballots in Tuesday’s election. The number of voters covered by the ruling is not known, although some have estimated it to be in the tens of thousands. That decision follows an earlier ruling that found Ohio’s process for maintaining its voter rolls wrongfully removes eligible people based on their failure to vote in recent elections.

After state Democrats had filed a lawsuit alleging GOP plans to intimidate voters, a judge issued a temporary restraining order against the Trump campaign and a Republican political operative aimed at preventing harassment at the polls. A separate effort by Democrats in Ohio to restore “golden week,” when people could register and cast ballots at the same time, failed after the U.S. Supreme Court declined to intervene.

Democrats had claimed the reduction, along with other voting changes, disproportionately burdened black voters and those who lean Democratic. But the state’s attorneys argued the reduction alleviates administrative burdens for local election officials while reducing costs and the potential for fraud.

Trump has warned for weeks of a “rigged” election, asking supporters to head to the polls to watch for voter fraud and mentions Philadelphia as a place that could have problems on Election Day.

Days before Tuesday’s election, state Democrats filed a lawsuit alleging some Republicans were planning to intimidate voters at the polls. Meanwhile, a judge rejected a lawsuit by Republicans challenging a state law that requires poll watchers to be registered in the county where they want to monitor the vote.

A federal appeals court ruled this summer that the state’s 2011 voter ID law discriminated against minorities and the poor, ordering officials to relax the ID requirements for the November election. Experts had said the law was among the toughest in the nation, requiring voters to show one of seven acceptable forms of photo identification that included a concealed handgun license but not a college student ID.

It was estimated that more than 600,000 registered voters in Texas lacked an acceptable ID under the law. And there were early signs that confusion surrounding the law has persisted, with reports during early voting of at least seven counties with outdated posters and poll workers saying photo IDs were required to vote.

A federal judge in September had said Texas officials must change its voter outreach efforts after the Justice Department accused the state of still giving the impression that some voters cannot cast a ballot.

This is the first presidential election in Wisconsin in which voters will be asked for photo identification. The voter ID law was initially blocked by the courts and then went into effect for the presidential primary in April. In July, a federal judge left the voter ID requirement in place but struck down more than a dozen other election changes, including limits on early voting hours and locations.

As many as 300,000 Wisconsin voters may not have the required photo ID. In recent weeks, recordings by voter advocacy groups have shown state DMV workers giving people inaccurate information about what they can do to obtain alternative voting credentials if they lack a photo ID. A federal judge in October ordered the state to clarify the process and produce a simple, one-page handout that can be distributed in person and online.

Civil rights groups are also monitoring a group of other states with new voting restrictions or requirements in place for the first time. Those states are Mississippi, Nebraska, New Hampshire, Rhode Island, South Carolina, Tennessee and Virginia.