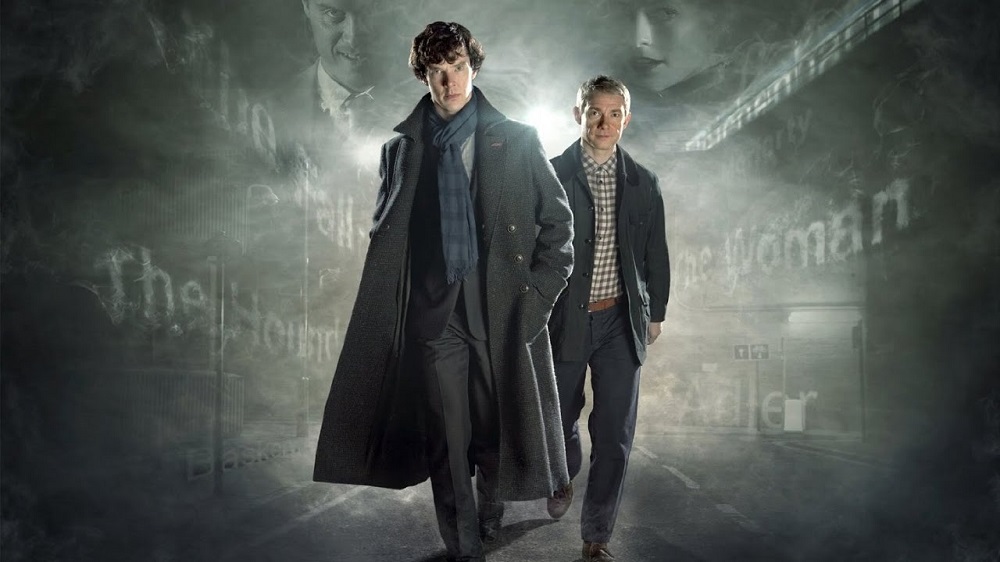 It’s been three years since fans have seen Benedict Cumberbatch and Martin Freeman solving those “Sherlock Holmes” mysteries (aside from the one-off special last holiday), but Season 4 is back on the BBC and PBS here in the US for the first three episodes. The season finale will be airing in theaters in the U.S. showing what a global success this show has become

“Downton Abbey” didn’t even get that kind of treatment.

There’s something rotten in Baker Street.

It may just be the diaper of baby Rosamund Watson, whose arrival at the start of the fourth season of “Sherlock” disrupts the relationship between brilliant, demanding detective Sherlock Holmes and his long-suffering friend Dr. John Watson.

The offspring of John and his enigmatic wife Mary – with Sherlock as a somewhat skeptical godfather – is one of the few things program-makers are willing to reveal before the first of three new episodes airs Jan. 1 on the BBC in Britain and on PBS in the United States.

“The unofficial alternative title for episode one is ‘The Three Watsons,’ because the baby changes the dynamic,” said Mark Gatiss, the show’s co-creator. But, he stresses: “Not in a cutesy way.” 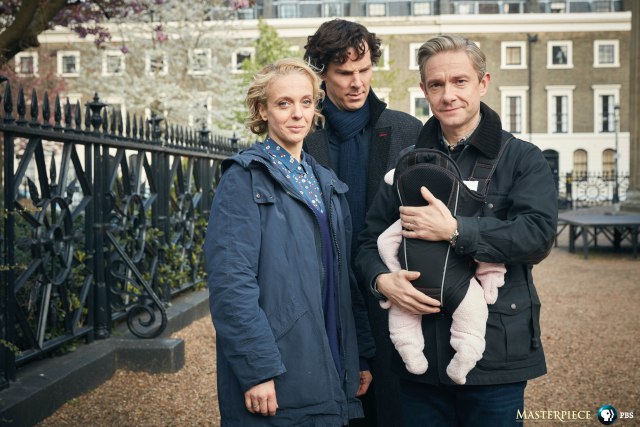 That’s just the starting point for 90 minutes of virtuosic puzzle-solving, prickly friendship and the spectacular return of ghosts from one character’s past.

The new episodes pick up where the previous season left off almost three years ago. Since then, fans have had to make do with a one-time special last year that took the characters back to their Victorian roots.

The show’s success means Benedict Cumberbatch, who plays Holmes, and his Watson, Martin Freeman, are in huge demand, and “Sherlock” must fit around their other projects. Cumberbatch jumped back into Holmes’ deerstalker hat right after finishing work on the Marvel adventure “Doctor Strange.”

Everyone involved in “Sherlock” is sworn to spoiler-free secrecy about the plot, although Cumberbatch offers that it finds the great detective “at the top of his game, at the very bottom of his soul.”

He says viewers will see more of Sherlock’s vulnerabilities as he faces crises both personal and professional.

“It would be very dull if he was permanently a kind of impregnable hero who was always right,” Cumberbatch said during a break from filming. “There’s some spectacular own-goals, misses and mistakes in this series.”

“It’s been interesting how that person locked in a bit of glacial ice has slowly been thawed into someone we can actually relate to and understand,” Cumberbatch said. “And there’s a lot more of that in this series.”

There is also a pivotal role for Mary, played by Amanda Abbington, whose secret past as a highly trained assassin was revealed in season three. There has been intense speculation about what will happen to her, inspired in part by the character’s fate in Arthur Conan Doyle’s original stories.

“I like the idea of her not being there forever,” said Abbington, who recently split from real-life partner Freeman after a 16-year-relationship. “She wasn’t (there forever) in the books, so I don’t think she should be in this. It’s about Sherlock and John, and it should be about them.

“I don’t want her to become the third wheel.”

Co-creators Moffat and Gatiss still sound slightly bemused at the volcanic success of their modern-day take on the cerebral sleuth. When “Sherlock” debuted in 2010, Freeman had starred in the U.K. version of sitcom “The Office” but had yet to play Bilbo Baggins in “The Hobbit.” Cumberbatch was best known for costume dramas and stage work.

“Benedict Cumberbatch went from ‘Are you making that name up?’ to the most famous man in the world, the most famous living Englishman, in the space of 90 minutes one Sunday,” Moffat said.

During the first series, Cumberbatch and Freeman could film in London’s teeming Trafalgar Square without drawing much attention. Now, crowds gather outside the nondescript building that plays 221B Baker St. on every shooting day there.

All this means the arrival of new episodes of “Sherlock” is a major TV event – and now a movie one, too. The last episode of the new series, “The Final Problem,” will be broadcast in U.S. cinemas on Jan. 16 and 18.

Gatiss says there’s no formula for the show’s success.

“It’s like bottled lightning,” he said. “It’ll never happen again. We’ve all had hits, but this is just a phenomenon.”

The third season’s last episode (“His Last Vow”), hinted that Sherlock’s nemesis Moriarty will return—or at least someone using his name might surface. Sherlock was on his way to exile when a video of the ubervillian asking, “Did you miss me?” clogs British airwaves. But how could Moriarty have survived blowing his own head off in “The Reichenbach Fall?”

That’s the very question Sherlock asks in “The Abominable Bride” when the detective drugs himself into a stupor and hallucinates that he and Watson are living in the 1890s. The duo is working a familiar case: a woman commits suicide by shooting herself in front of witnesses—only to resurrect days later. (Not unlike Moriarty.)

Sherlock comes up with a theory: the woman fired a gun into the air with one hand while pretending to kill herself with a gun in the other hand creating the illusion of a suicide. But he later decides that neither she nor Moriarty could have faked their deaths. “I never said he was alive. I said he was back,” he tells John and Mary at the end of the episode. “Of course he’s dead. He blew his own brains out. No one survives that.”

He goes on: “Moriarty is dead. No question. More importantly, I know exactly what he’s going to do next.” It’s unclear whether this means Moriarty’s plans are still in motion posthumously, there’s an imitation Moriarty on the loose or someone other than Moriarty died on that rooftop.

What is clear is that Sherlock will never be completely free of Moriarty. When Sherlock is hallucinating in “The Abominable Bride,” an imagined Moriarty calls himself the virus in the hard drive that is Sherlock’s mind. “Once the idea exists it cannot be killed,” Sherlock notes.

But couldn’t the creators be messing with us?

Maybe. There are plenty of Reddit theories about how Moriarty could have survived, and Sherlock even provided his own hypothesis in the holiday special. Perhaps the solution is glaringly obvious: In “Abominable Bride,” Watson posits his own theory for how the woman and Moriarty got away with their suicide. “It’s twins, then,” he says. “It’s never twins!” Sherlock rebuts. That sounds a lot like when Dr. House would say, dismissively, “It’s never lupus”—until, of course, it was lupus.

There’s also a quick shot in the season four trailer of the back of a man’s head. The hair and ears could belong to Moriarty actor Andrew Scott.

And while co-creator Steven Moffatt has said he’s not interested in bringing back Moriarty because his appearance is no longer surprising, the show needs a strong nemesis. Season three’s baddie, publishing magnate Charles Augustus Magnussen, was not nearly as compelling. Besides, it’s hard to imagine any future villains achieving the same chemistry with Cumberbatch. Even Moriarty himself argued in “The Reichenbach Fall” that “every fairy tale needs a good, old-fashioned villain.”

Is Culverton Smith connected to Moriarty?

Whether Moriarty is dead or alive, there will be a new villain in season four: Culverton Smith (Toby Jones), a character from Arthur Conan Doyle’s story “The Dying Detective.” In an interview, Moffatt said Smith is “the darkest villain we’ve had. There was always something charming and engaging about Moriarty. There was something fascinating and actually amoral, rather than immoral, about Charles Augustus Magnussen. This guy is the purest evil.”

It’s unclear what, if anything, Culverton and Moriarty have to do with one another.

How are John and Mary going to continue investigating crimes now that they have a baby?

Sherlock Holmes’ friends have alternately been both his greatest strength and his greatest weakness: They come to his rescue when he’s in need, but they’re also easy targets for criminals. Both Mary and John were caught in the crosshairs last season: Magnussen tried to blackmail Sherlock and John with information about Mary and had his henchmen toss John into a bonfire.

The promos and trailer for this season suggest that the stakes are even higher now. One of the promotional videos shows Holmes and Watson sitting in a sea of blood. Now that John and Mary are parents, they’ll have to be extra careful to make sure that kid does not end up an orphan.

Is this the last season of Sherlock?

Possibly. Benedict Cumberbatch and Martin Freeman are full-fledged movie stars now. It took three years to get a new season made. Cumberbatch, especially, will be preoccupied with his budding superhero franchise, Doctor Strange. The actor even admitted in an interview that scheduling may prevent future seasons.

“It might be the end of an era,” Cumberbatch told British GQ. “It feels like the end of an era, to be honest. [Season four] goes to a place where it will be pretty hard to follow on immediately. We never say never on the show. I’d love to revisit it, I’d love to keep revisiting it. I stand by that. But in the immediate future we all have things that we want to crack on with and we’ve made something very complete as it is, so I think we’ll just wait and see. The idea of never playing him against is really galling.”

So if this is definitely the last season, don’t expect another cliffhanger. 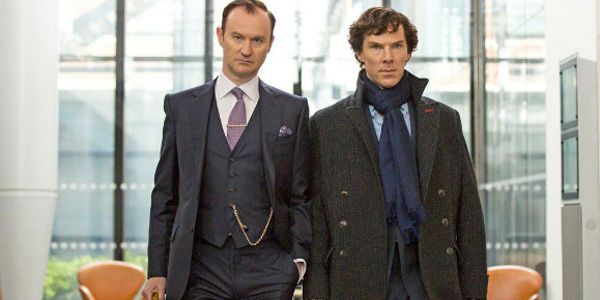 Will the third Holmes sibling show up?

Mycroft alluded to a third Holmes sibling in the last episode of the third season: “I’m not given to outbursts of brotherly compassion. You know what happened to the other one,” he says. Will we be treated to an appearance by the third Holmes?

There are rumors that none other than Tom Hiddleston will play the long-lost Holmes brother. Mycroft actor and Sherlock co-creator Mark Gatiss posted an Instagram photo with Hiddleston at Comic-Con captioned “blud,” which means friend but could possibly be referring to an onscreen brotherhood.

Has Sherlock replaced Watson with a dog?

One of the first images BBC released of season four is of Sherlock with an adorable bloodhound. In Conan Doyle’s story “The Sign of Four,” Sherlock uses a hound named Toby to help sniff out clues. Bloodhounds, after all, are trained to trail humans. Perhaps that’s this dog’s function or perhaps Sherlock got lonely now that Watson is preoccupied with caring for a new baby.