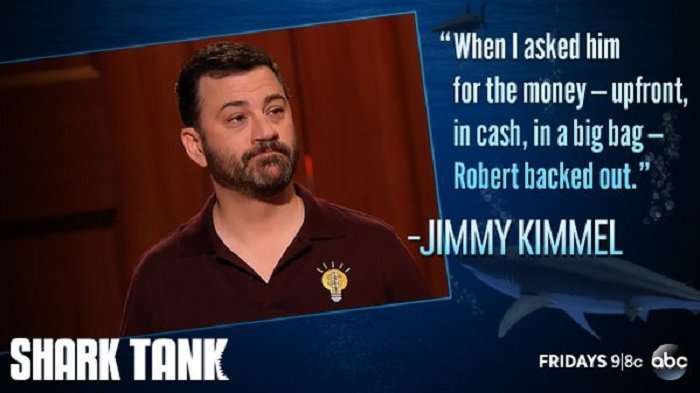 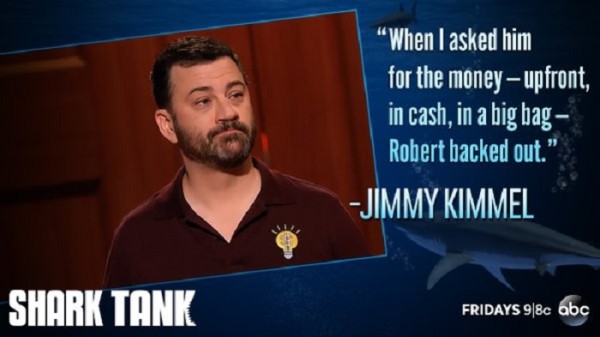 The Sharks were once again circling their newest batch of prey in tonight’s episode of ABC’s Shark Tank. Season 7 of the hit show continued with business moguls Robert Herjavec, Lori Greiner, Kevin O’Leary, Barbara Corcoran and Mark Cuban looking to invest in the latest up-and-coming companies.

In addition, the Sharks were once again visited by late night show host Jimmy Kimmel and his sidekick Guillermo, who brought yet another “pitch” to the tank. You may recall last season Jimmy and Guillermo tried to get an investment for their “business” Horse Pants – which was exactly that…pants for horses. Unfortunately, the comedian and his partner-in-crime were unable to sway any Sharks into investing, so we will see if things are different this time around.

So here are the pitches from tonight!

Couple Ani Blinova and Gabe Wolff founded their company, Wink Frozen Deserts, which offers non-dairy, sugar-free and gluten-free dessert options that are relatively low calorie (coming in at 100 calories a pint). The company spawned from Gabe’s own allergies to dairy and gluten. He decided to venture into creating an all-natural, clean dessert option, as he was having difficulties finding anything suitable on the market.

First, the two entrepreneurs give samples of each of their 6 flavors to the sharks. Robert claims he is an ice cream expert. However, he doesn’t seem too impressed with Wink’s product and even calls it bland.

Gabe explains that the company has garnered just over $534,000 in sales over three years. It is mainly sold in local retail stores and a few Whole Foods.

Barbara was the first to drop out, as she wasn’t impressed by their sales and the lack of flavor in the treat. Mark, Robert and Lori also drop out based on the taste.

Kevin is the last to criticize their taste but advises the couple to increase slightly the calorie content in order to enhance the flavor, as it will still be a better alternative to other high-fat ice creams on the market.

Thus, Wink Frozen Desserts walks out without an investment.

Next in the tank are soul mates Hugo and Debra Saavedra, who created a line of all-natural health and beauty products. Saavy Naturals offers food-grade, organic personal care products that incorporate the owners’ chef abilities with their passion for clean products. The line includes lotion, soaps, and scrubs that you are encouraged to take a taste of.

The owners hand out samples of their different products to the sharks. Several of the sharks give the products a taste and refer to it as fragrant and sugary. Lori clarifies that they aren’t actually marketing the products for consumption, but rather they are just trying to prove how pure their goods are.

Their line is currently being sold in a few regions of Whole Foods. The company has sold about $750,000 in the first year. At this point, they are not selling online.

Unfortunately, the company is $400,000 in debt, which triggers Mr. Wonderful to call their valuation insane. Shortly after, Mark drops out as he explains he is invested in a competitive company (Recall: Simple Sugars from the previous season of Shark Tank).

The Clean Cube is a portable laundry service created by Arthur Shmulevsky and Ryan Agran. The company offers a variety of services including package delivery, wash and fold, dry cleaning, grocery deliveries, mini storage and more. The business owners call the cube a “digital doorman.” The unit allows landowners to attract people to their real estate by offering a doorman like service.

Currently, the cube is in about 40 locations in New York City. They are charging landlords $7,000 for installation (which costs them $3,000).

Robert feels that the service will be too hard to get people to use and drops out. Lori, Kevin and Mark all have similar concerns and drop out.

Barbara is left, who understands the problem they are trying to solve but believes the market is too niche to be very profitable. Thus, The Clean Cube does not get an investment.

The last (actual) pitch of the night was from mother-daughter duo Linda Clark and Gloria Hoffman, the creators behind the Simply Fit Board. The board is a balance platform that allows users to get a full body workout. While there are hundreds of exercises you can do on the board, the ladies tell the sharks that twisting on the board is one of the most beneficial moves as it works out every muscle in your core.

The board not only burns fat but also increases your overall balance.

Unfortunately, the duo does not have a patent on the board itself, and rather just has one for the system of placing the board on its customized placement mat. However, they impress the sharks with their revenue of $500,000, with a profit of $260,000.

First, Kevin offers them $250,000 for 30%. Robert expresses concern about the lack of patents and drops out. Barbara and Mark drop out, as they felt it was perfect for an infomercial (i.e. Lori’s space).

Thus, Lori “Queen of QVC” offers $125,000 for 20% and also offers to help fund purchases orders in the future. Linda and Gloria ask Lori and Kevin to join in together. However, Lori declines and says she won’t go any lower than 20%.

Jimmy and Guillermo come into the tank with their latest gimmick, “The Kid Cone.” The joke “product” is a giant, wearable safety cone that ensures kids safety when playing around busy streets. However, you will have to tune into Jimmy Kimmel Live! on Monday at 11:35 pm on ABC to see whether any of the sharks “invest” or not.

On next week’s episode of Shark Tank, young entrepreneurs present their innovations, such as a college dorm room essential and a formula to fix shrunken sweaters. In addition, the Sharks meet President Barack Obama. You can catch this episode on November 13 at 9 pm on ABC.