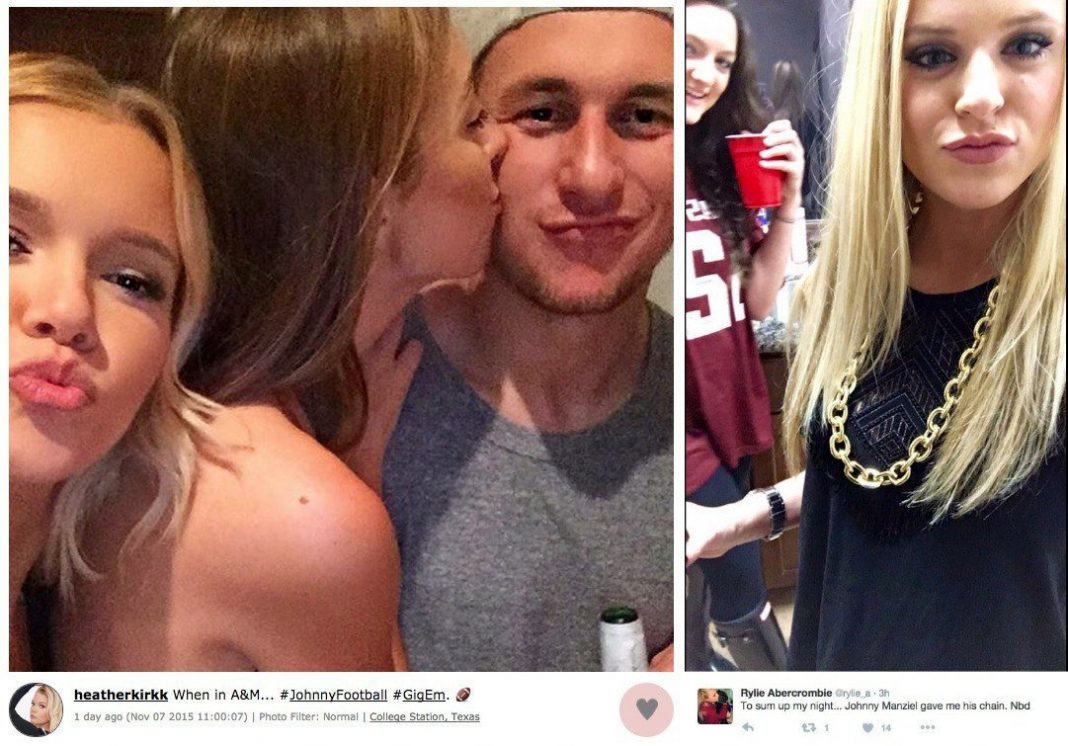 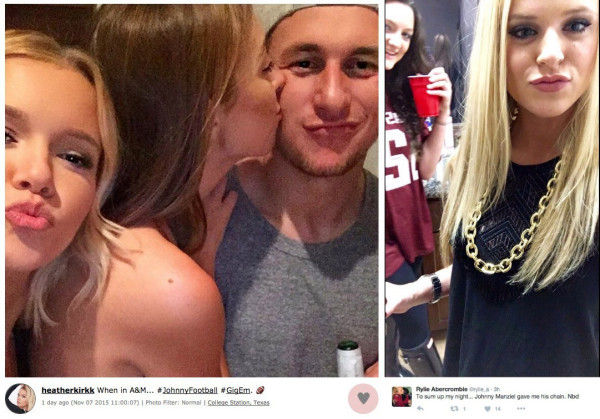 As Johnny Manziel tries to become the full-time starter in Cleveland, he keeps getting tripped up by a familiar opponent, himself. While the Browns prepare to play Pittsburgh this Sunday Manziel is having to answer for some social media photos that popped up showing him partying during his return to Texas A&M.

Manziel has an honorary captain on Saturday as the Aggies lost to Auburn. J-Football was also captain of the party brigade as he is seen with plenty of lovely ladies and is also seen holding what looks to be a beer bottle. Could have been a non-alcoholic brew for all I know, but Manziel is past the point of being given the benefit of the doubt.

Manziel had to answer questions from beat reporters in Cleveland about his weekend visit to his alma mater and he seemed unapologetic. He feels he has a right to a private life, even though he does admit that he needs to watch his steps after going through rehab back in the summer.

When asked about whether he would get the start this week versus the Steelers, Manziel was very open about wanting to keep his QB1 status over Josh McCown.

“I think it’s tough,” said Manziel. “I was telling Flip (offensive coordinator John DeFilippo) and everybody, as the game went on, I felt things starting to slow down more and more and seeing guys here and there. Not every game is going to be perfect in that aspect. Like I said, I’ve only played four starts. At the same time, I feel like I’m getting more comfortable, so it’s going to be hard knowing that I feel like I’m getting better and learning a lot being out there and then having to go back (to the bench). We don’t know if that’s been decided yet, or what the case may be, so we’ll cross that bridge when we get there.”

It’s clear that Johnny Manziel is a tough competitor. He wants the ball in his hands and believes he is the better option at quarterback for the Browns. I like that. I prefer that over a guy who would be comfortable holding a clipboard on the sideline while cashing a big check each week.

No pressure as a backup. Manziel could party more often while not having to worry about his performance each Sunday. Wanting to be the starter shows he cares about the game and wants to help his team win. He is Johnny Football and football is his life.

Now, what can he do about situations like this past weekend at A&M, with photos that will always be a part of any outing he is a part of?

I’m certainly not a PR pro, but I do have a few viable options that would help Manziel move past these types of party situations. I have no answers for when he is involved in an alleged domestic dispute. He’s on his own there.

Here are seven things Manziel can do to mitigate the damage from photos of him in questionable party scene situations.

7. The biggest issue is not technically the party scene; it’s the fact that Manziel spent time in a rehab facility. He may think he can control his drinking, but he’s wrong. The pull of addiction is more powerful than him, and he should not pick up a beer at all. That’s a tough task when surrounded by everyone else having a good time with booze flowing.

6. Shadow Tom Brady for a month this offseason. Surely J-Football would learn how to act in 30 days around the guy who’s only trouble has come from trumped up charges about air pressure.

5. Perhaps Manziel could use a constant mentor at his side for all public outings. Dr. Phil is pretty expensive by the hour, but the guy might enjoy some time out with Manziel and the ladies and give the kid a discount.

4. The pics from his visit back at Texas A&M would have been less controversial had he not chosen to wear this giant log chain around his neck. If your necklace weighs more than the WWE Championship Belt, then don’t wear it in public.

3. Try private parties my man. Have security guards confiscate all digital devices as they enter. How hard would that be?

2. Manziel could go Bill Belichick on reporters when they have juicy photos. It takes great patience to give the same answer over and over, but “we’re getting ready for team x” will make the reporters weary over time.

1. He could just own it. The guy has already said he has a right to a private life, and he’s right. He should just tell reporters repeatedly that he likes hot women around him and likes an occasional beer. Make sure the press knows he’s not perfect and can’t be held to that standard because he will never be an angel.

This tact will take the pressure off of him answering everything just right, which is impossible anyway.