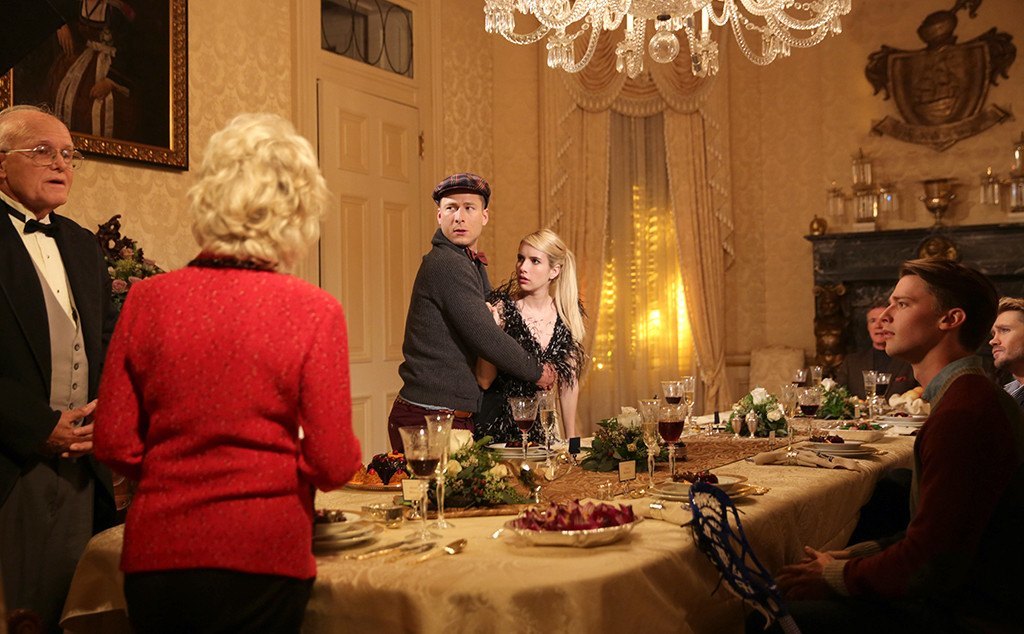 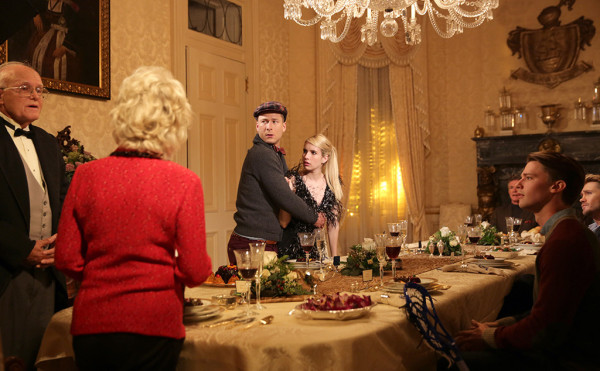 There are only three more episodes until the “Scream Queens” finale, and this week, the drama is all over the place.

Chanel tells Chad that he doesn’t have to worry about Hester anymore because she, along with gravity, have taken care of her. This means she can go with him for Thanksgiving to the Hamptons to meet his parents. Chad thinks it so hot that she killed for him and wants to see the body. But not only does he want to see the body, but he also wants to have a three-way with the body. Gross. They go to the icebox where they put her body but surprise, she’s not there. He asks Chanel if she checked Hester’s pulse but hey, Chanel is not a nurse so of course she didn’t.

Gigi spends Thanksgiving with the other Red Devil, and it is pretty pitiful. She tells whoever it is that Boone, their brother, was not worthy to work with them, and it’s a good thing that he‘s dead. Um okay, Gigi. She gives the Red Devil an electric knife to carve their little fowl, but we don’t see what happens there.

Chanel #3’s Thanksgiving is depressing as she eats a Swanson dinner at her parents house and has to sit in the back with the help because she was late. She can’t take it anymore; she hates defrosted food and the fact that her family doesn’t care about what’s going on at the Kappa house. She plans to never return as the Kappa house is her home.

When she gets there, she hears a knife clinking and goes into the kitchen to find it’s Munsch slaughtering a turkey. She is cooking dinner and everyone is invited.

Grace avoids her father deciding to stay at the Kappa house. He calls her to see if she’s coming home. She asks about Gigi, and he tells her she didn’t show up, so Grace invites her dad to the house to have dinner with them.

At the Radwell’s Thanksgiving, Chad’s mom introduces Chanel and is less than excited about her being there. Everyone stands and introduce themselves. His brother Brad, played by the awesome Chad Michael Murray, introduces himself and is extremely self-centered; I love it…well, really I love seeing him back on TV. Chad’s mom stands up and says that she’s thankful for her son being alive despite the killings on campus and that he will have a long life and meet a lot of women. Chanel can’t take it any longer and screams at her about wanting to reach across the table and slap her. Then, HESTER SHOWS UP asking, “What did I miss?”

Chad introduces her as his sober coach. Hester stands up and announces that she is pregnant with Chad’s baby, but his mother is not having it. She shuts it down, and Hester sits in embarrassment and disappointment.

After dinner, Chad’s dad offers Chanel money to “leave now and never come back.” She is appalled and walks out on him. She storms to tell Chad, and he says that maybe she should take it because “it is kind of awkward” and with their traditional game of Pictionary, it’s going to be painful.

Back at the Kappa house, they have a conversation, which includes playing a game where they guess who the Red Devils are. Munsch accuses Chanel #3 and goes over all the reasons why it’s her. Number 3 then turns it around and says that it’s Dean Munsch, and so on.

Chanel #5 comes in, with her eight-meat stuffing, right in the middle of Chanel #3 making her case for Dean Munsch and Grace points out that she has a point; it could all be apart of her plan of revenge. They lay out an elaborate mountain of evidence against her, including the fact that Munsch saying she is allergic to Bologna is what got her off for killing her husband, but #3 saw her eating a bologna sandwich a few days before while out and about. Plus the stuffing #5 made has spam, which is full of sulfates just like bologna. In the midst of all this, Wes stand up and says that his daughter is the killer. They debunk it, and Pete comes in with what he believes os evidence that places Wes as the killer.

With all the drama at the Kappa house, there is even more drama at Chad’s family house. They play their game with Hester and Chanel the butt of the jokes. They are  horribly embarrassed as pitted against each other. All of the Radwell’s guesses are insulting and mean and funny as hell. Chanel cannot take it any longer. She stands up, apologizes to Hester and tells Chad’s family all the way off, addressing and perfectly insulting each member. She is done with Chad, lets him know in front of his entire family and storms out. Hester follows right behind her.

At the Kappa house, we find out that Wes was a man whore back in the 90’s thanks to Pete’s research, and he drops the bomb that he is Boone and (thus obviously) the other Red Devil’s father.

He retreats to a room in the house, and Grace finds him. “I didn’t know, and I swear if I had I would have taken responsibility.” She believes him, and he asks her if she can really send one of her siblings “to the chair” and she says yes. She will do anything for the people she loves, even the Chanels who are all a part of her “highly dysfunctional family.” She assures her dad that no one is going to the police and everything is going to be okay.

They join the rest of the crazies, including Chanel Prime, downstairs as she tells everyone what happened at the Radwell’s.  But at the last minute, Chad shows up the house, so that he can “get his turkey on” her. #5 brings out the turkey but hold up wait a minute, it’s Gigi’s head!

I didn’t see that coming.