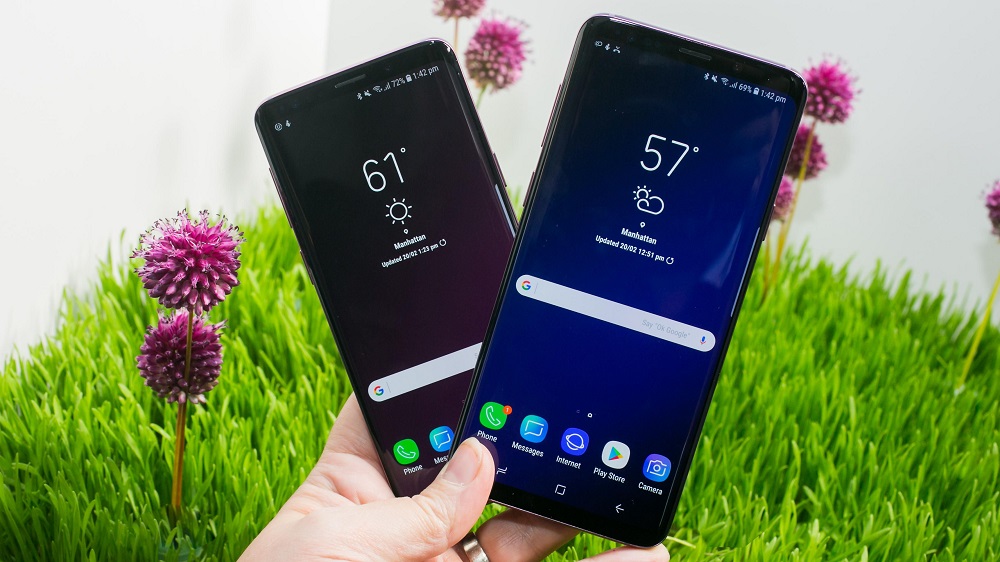 After Samsung was able to keep their Galaxy S8 phones from bursting into flames, the company more than made up for that huge gaff, so they’ve pushed out the latest Galaxy S9 which doesn’t feel a whole lot different. There are three major changes that make it a worthy upgrade; if you’re happy with the Galaxy S8 or Galaxy S8 Plus, there’s no rush.

There is a huge difference and that’s in the very fine print they know most customers never bother reading. This is one time reading can save you a lot of problems down the line.

By not reading this clause, you can lose out in the pocketbook.

Heavily marketed across the site is ‘Samsung Upgrade’. This entitles you “Get the latest Galaxy Phone every year,” and it is the default payment option when you try to pre-order the Galaxy S9 or Galaxy S9 Plus, regardless of whether you requested it. Choose it and you are still told the “total” is the standard price for the phones (either $720 or $840), but Premium Care has been added “on separate financing terms.”

Premium Care is not listed as part of the “total” but will cost you an extra $11.99 per month over a two year period. The first month is free so that’s 23 payments totalling an extra $276. If you’d like to find out more about it Samsung states: “For additional questions regarding Samsung Premium Care, please call 1-866-371-9501.”

Furthermore, if you do place this order by accident then because the first month of Premium Care is free you won’t notice it in your billing. You will in month two, but then you have already passed the 30-day return window. Samsung also retains the right to increase the monthly cost of Premium Care at any time with 30 days notice.

If you are careful and you read through the Samsung Premium Care terms and conditions (all 3,000 words of it which you can see above) you shouldn’t get caught out. But obviously, not many buyers take these precautions.

All of which makes buying the Galaxy S9 and Galaxy S9 Plus more hazardous than customers have any right to expect.

Only T-Mobile and Samsung are selling these models at their actual retail prices and the former locks you to T-Mobile, while the latter requires you make careful purchasing options. Meanwhile AT&T, Sprint and Verizon are needlessly hiking prices by as much as $75 on top of making you sign a multi-year contract.

Samsung says its new Galaxy S9 phone features a “reimagined” camera, and it is indeed pretty darned good. But you might not want to shell out $720 or more for one just yet unless your current phone is already close to death.

That’s because other high-end phone cameras — nowadays, one of the major differentiators between phones — are also pretty darned good. If your phone is recent, it probably already has a decent camera. Technology has improved to the point that it’s really hard to tell the difference between them.

In many of our test shots, the S9 outperformed the best of its rivals — Apple’s iPhone X, Google’s Pixel 2 XL and Samsung’s own Galaxy Note 8. Photos had more detail and less distortion. But unless you magnify images for closer inspection, usually there’s little obvious difference beyond color variation, which comes down to personal preference. In a few cases, the S9 performed worse than all three.

The phone comes out March 16 with a U.S. starting price of $720 through Samsung and T-Mobile and nearly $800 through other major U.S. carriers. Here’s a look at what the S9 offers.

In a first for a major smartphone, the S9 camera has an adjustable aperture, or lens opening, to let in more or less light. Low-light shots are also improved with software tricks that automatically take 12 shots in quick succession and blend the best of each.

These changes produce small improvements in shots: The evening sky tends to be darker, with less distortion. A statue of Abraham Lincoln doesn’t look as grainy. Many S9 shots also have better contrast between dark and light areas.

But these differences are very subtle. What’s more likely to affect picture quality is the steadiness of your hands.

The most distinctive feature in Samsung’s new camera is super-slow-mo video. People appear frozen as they jump. Waterfalls seem at peace as drops trickle down. The feature offers a fresh perspective on that time-honored prank of having fake snakes pop out of a can — not so scary when the snakes float in thin air.

It’s a gimmick, but loads of fun.

The camera can process only a fifth of a second of video at a time — stretched into six seconds when viewing — so auto detection is key to capturing the right moment. It’s fun to see people jump up at this speed, but less so when the super-slow-mo part doesn’t kick in until they’re almost back on the ground. There’s a lot of trial and error involved.

And compared with still images and regular video, super-slow-mo video tends to be darker and blurrier, particularly with close-ups. The feature is at its best outdoors, when lighting is good, and the subject in motion is far enough away. 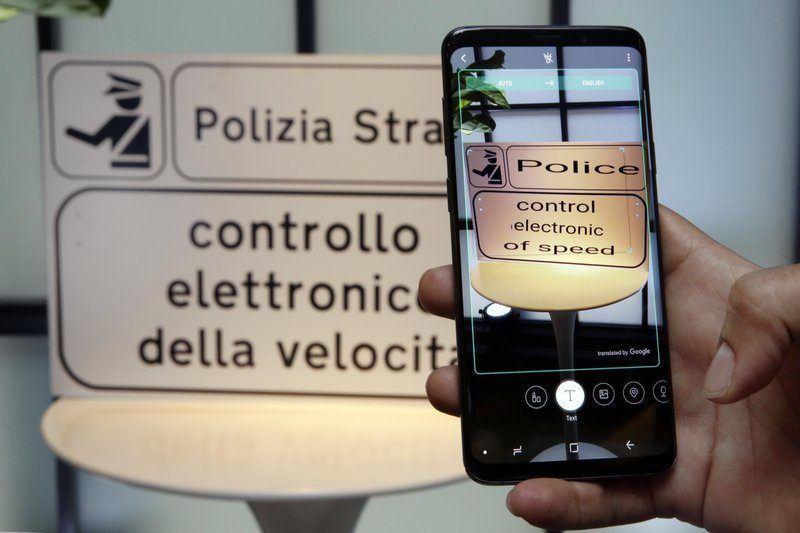 Samsung’s Bixby digital assistant taps the camera for instant translations. Just point the phone at a sign and see it in English (or your chosen language) with similar fonts and colors.

Bixby was more reliable at picking up text than a similar Google Lens feature on Pixel phones. But stop signs in Thai, Portuguese and French were translated as “first,” ″shield,” and “crazy.” Bixby got Indonesian right, though. And it can deal with long passages in posters and documents. 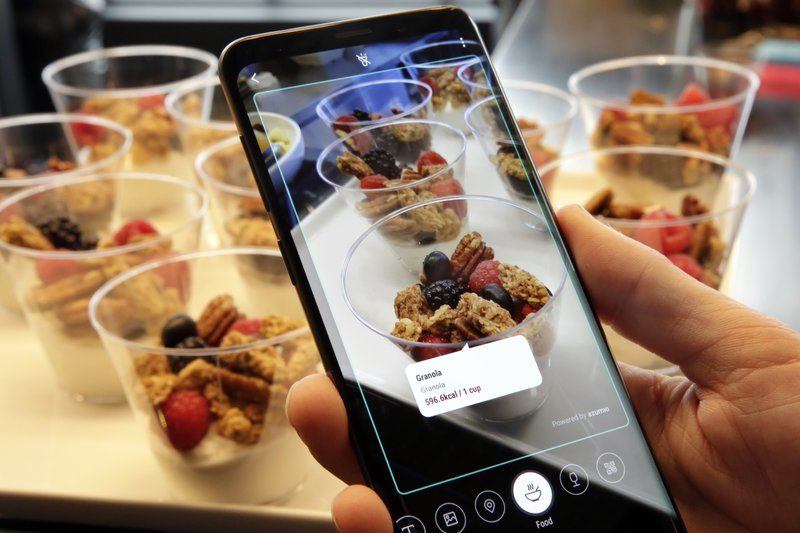 YOU ARE WHAT YOU EAT

Point the camera at food for nutritional information. It gave me close-enough calorie counts for a burger and onion rings, but a roast beef sandwich was misidentified as either a pastrami or a Cubano sandwich, depending on the angle.

All counts are based on single servings, which isn’t as useful as Bixby telling me the mac and cheese I had was actually three servings, or triple the calories. Unreported calories don’t contribute to weight gain, right?

The larger S9 Plus model has a second lens with twice the magnification. Though I didn’t test this model, a similar feature in other phones is essential for producing better close-ups.

Both S9 models have a feature for turning selfies into personal emojis for sharing in messages. Some people will love this; I found no use for it. Next!

The new phone is easier to unlock by looking at it. Past Samsung phones scan your iris, but they don’t work reliably in bright sunlight. The S9 supplements that with facial recognition, which isn’t as secure. For that reason, Samsung won’t let banking and other sensitive apps use just the face, but it’s OK for unlocking the phone (you can disable it if you’re concerned). In any case, glasses can still be challenging, but there’s a fingerprint sensor on the back as a backup. It’s moved slightly to reduce smudges on the camera lens.

Beyond that, the phone’s design hasn’t changed much from last year’s S8. But that’s OK. No need to fix what isn’t broken. What matters is what the phone does — and shoots. 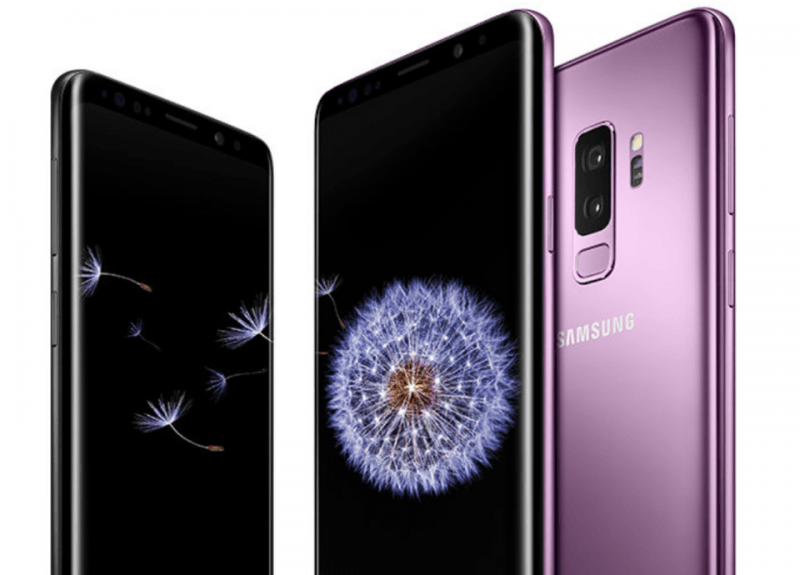 What is earning the Galaxy S9 and Galaxy S9 Plus the “Samesung” nickname is their close resemblance to last year’s Galaxy S8 and Galaxy S8 Plus. But the fact is there wasn’t much wrong with the external design of Samsung’s 2017 models and what was wrong, Samsung has (mostly) fixed.

As such the idiotically placed fingerprint sensor from the Galaxy S8 models has been moved to a logical, central position below the rear camera(s). The top and bottom bezels have been slimmed even further (their display-to-body ratios are higher than the iPhone X thanks to its notch) and the underwhelming mono speaker has been replaced with louder stereo speakers (thanks to an amplified earpiece, like iPhones) with Dolby Atmos support. 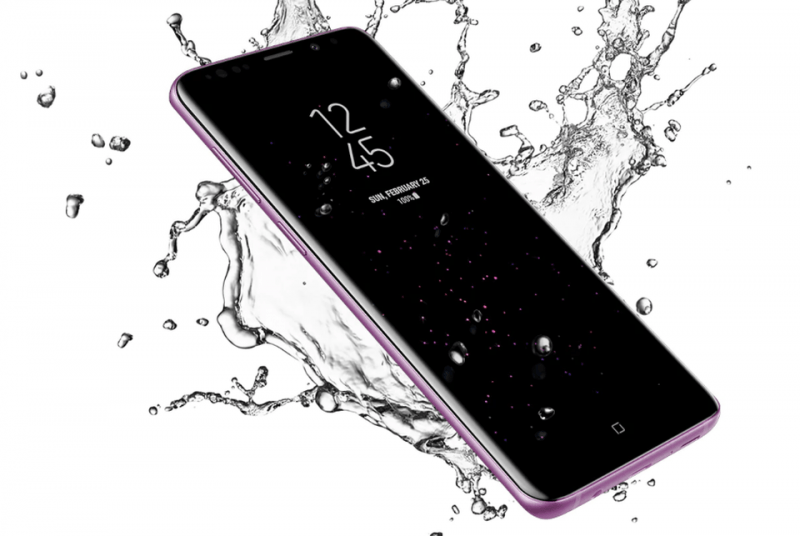 The new Galaxies also retain what the Galaxy S8 and Galaxy S8 Plus got right: IP68 water resistance, the headphone jack and microSD storage expansion with expanded support up for cards up to 400GB. 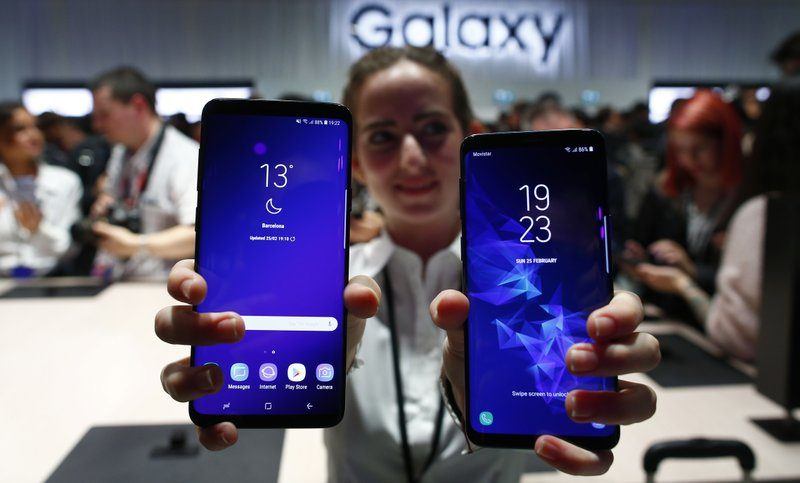 Samsung has swapped out the phones’ core aluminium chassis. Out goes aluminium compound AL 6013 and in comes AL 7003, which is a lot less prone to warping and deforming under pressure. But this is just the start.

Next is a subtle change to the metal rim on both the Galaxy S9 and Galaxy S9 Plus. It is 0.2mm thicker but, in combination with AL 7003, it transfers 20% less shock to the precious glass display when dropped.

While smartphones always pickup bumps, scratches, and scuffs, the one that really hurts is a cracked display. To this end Samsung has made both Galaxy S9 and Galaxy S9 Plus displays 20% thicker than the Galaxy S8 and Galaxy S8 Plus, bumping their front glass thickness value from 0.5T to 0.6T.