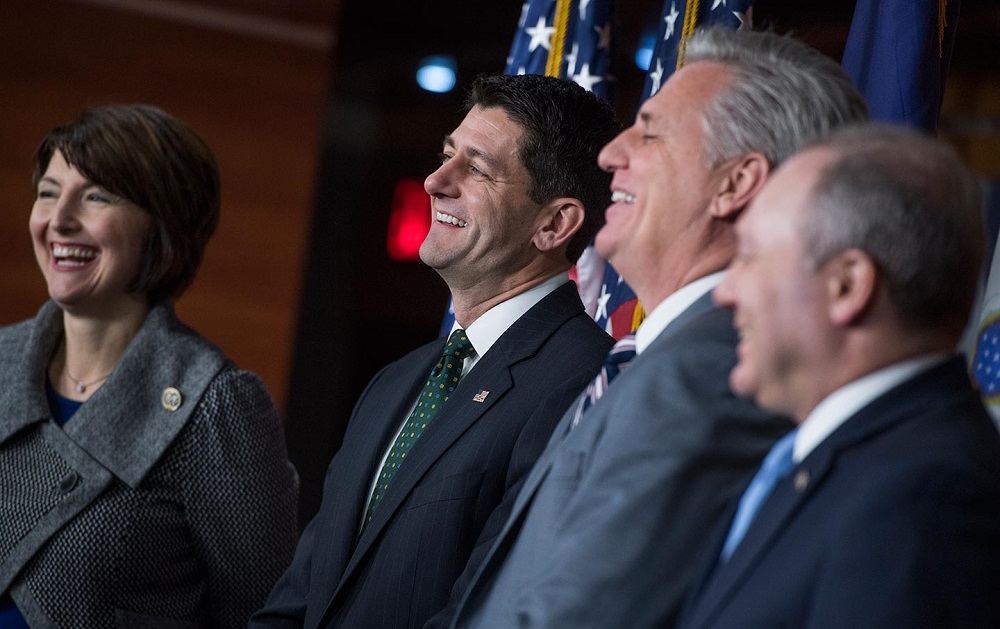 Donald Trump‘s much-needed win has already got Republicans excited that the controversial tax bill will be passing on Tuesday.

The House of Representatives are expected to approve the bill easily, but it will be a much tighter race in the Senate. Democrats claim that this is just a gift to corporations, large Republican donors and the super rich while Republicans claim it’s a gift to middle Americans.

We compiled a winners and losers list so you can see where you fit in on this tax bill. Below are what’s in the bill in graph form, and we’ve also included the entire tax bill below in PDF that you can download if you like some light reading. 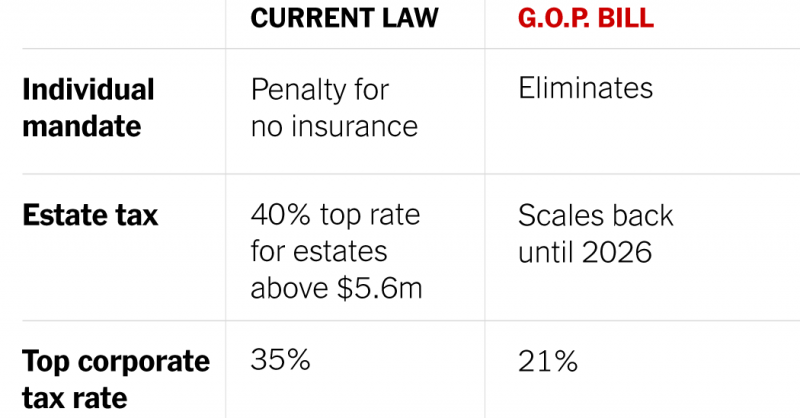 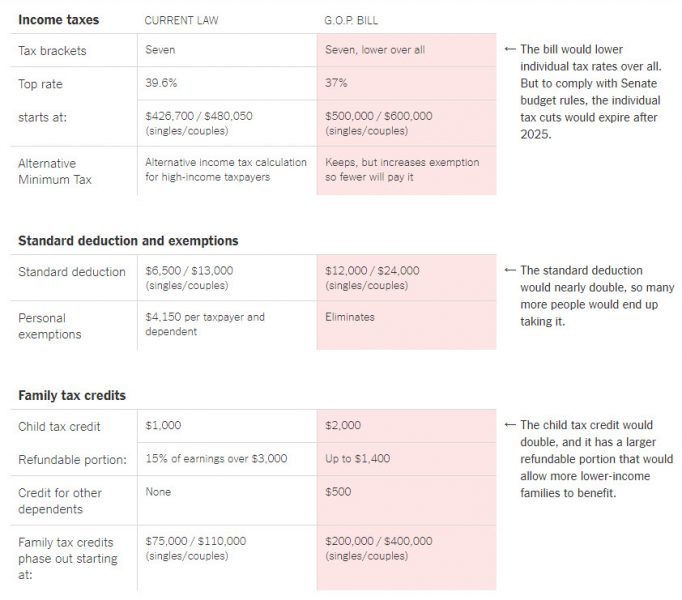 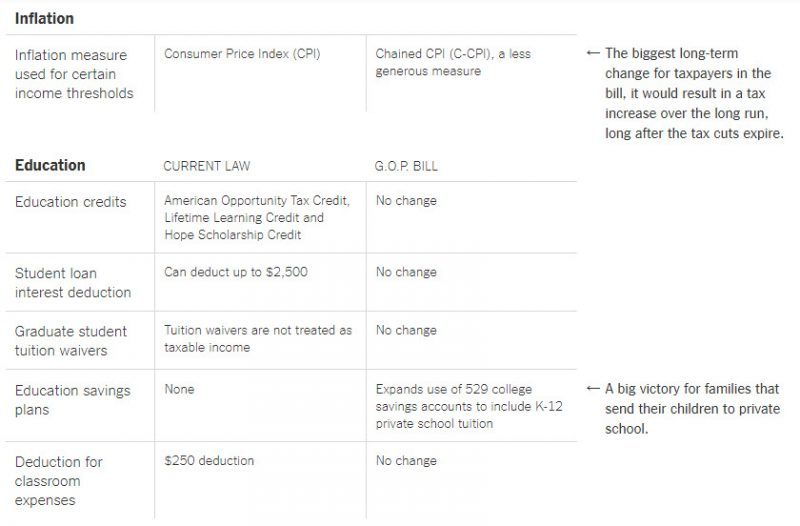 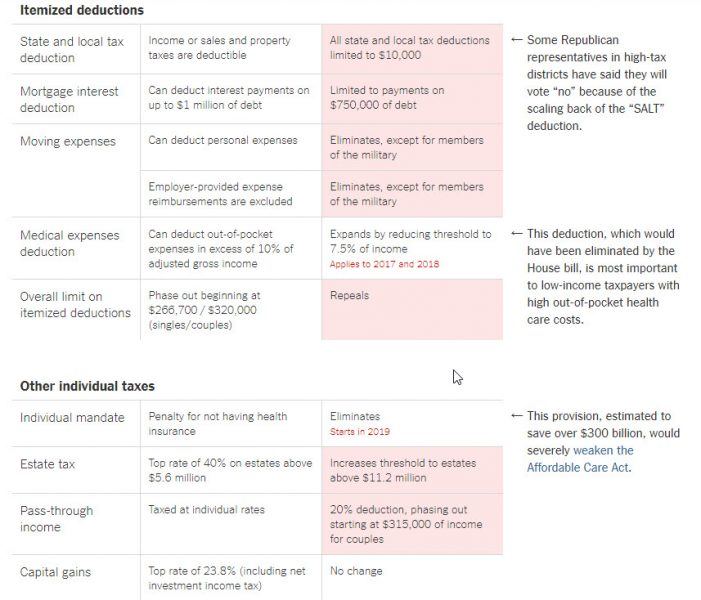 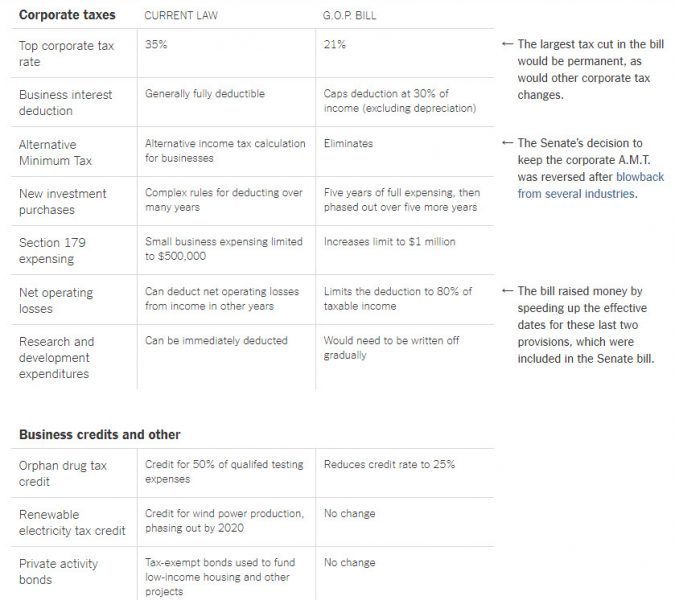 This led to overly happy Republicans took a victory lap on Tuesday hours before their big vote on the most sweeping overhaul of the nation’s tax laws in more than three decades. House Speaker Paul Ryan dismissed criticism of the widely unpopular package and insisted “results are what’s going to make this popular.”

Their long-sought political goal within grasp, Republicans were set to catapult the $1.5 trillion tax legislation through the House, rolling over a dozen GOP defectors from high-tax states. Senate Majority Leader Mitch McConnell of Kentucky said the Senate would vote Tuesday evening, sending the legislation to President Donald Trump.

Sen. Orrin Hatch defended a late provision he added to the GOP tax bill that could extend significant tax breaks to real estate companies, among others. The controversy threw a spotlight on one of the bill’s largest and most complicated tax provisions, one where even small tweaks can affect large swaths of the economy.

The Utah Republican’s statement came after a wave of speculation that the benefit had been added to secure a “yes” vote from Sen. Bob Corker, R-Tenn., a wealthy real estate investor who has strongly denied any role in crafting the provision. Hatch said it was a product of House and Senate negotiations and had nothing to do with Corker, who had been on the fence before announcing on Friday that he was backing the bill.

“Some have asserted that a new provision was crafted for real estate developers and was ‘air-dropped’ into the conference agreement,” Hatch said, referring to the final bill. “Second, reports have implied that you (Corker) had some role in advocating for or negotiating the inclusion of this provision. Both assertions are categorically false.”

The measure’s inclusion highlights an ongoing concern in every version of the tax legislation up to this point: Which industries benefit from a major new tax break — and which ones are left behind.

“When we get this done, when people see their withholding improving, when they see jobs occurring, when they see bigger paychecks, a fairer tax system, a simpler tax code, that’s what’s going to produce the results,” said Ryan, R-Wis.

The bill provides steep tax cuts to businesses and wealthy families, and more modest cuts to middle- and low-income families. It scales back a popular deduction for state and local taxes, repeals a key tenet of Barack Obama’s Affordable Care Act and allows drilling in the Arctic National Wildlife Refuge.

“Did you ever believe we would be here on this day?” asked House Majority Leader Kevin McCarthy, R-Calif.

Republicans acknowledged they still have to convince many Americans of the benefits of their bill, which polls poorly. Many voters in surveys see the legislation as a boost to the wealthy, such as Trump and his family, and only a minor gain for the middle class.

The complex legislation blends elements of separate House and Senate bills that were recently passed. It permanently slashes the tax rate for corporations from 35 percent to 21 percent. The tax cuts for individuals are temporary, expiring in 2026. It doubles the standard deduction used by about two-thirds of U.S. households, to $24,000 for married couples, also ending in eight years.

The $1,000-per-child tax credit doubles to $2,000, with up to $1,400 available in IRS refunds for families who owe little or no taxes. Parents would have to provide children’s Social Security numbers to receive the child credit, a measure intended to deny the credit to people who are in the U.S. illegally.

Those who itemize lose some deductions.

The legislation also repeals an important part of the health care law — the requirement that all Americans carry health insurance or face a penalty — as the GOP looks to unravel a law it failed to repeal and replace this past summer.

The package represents the first major legislative achievement for the Republicans after nearly a full year in control of Congress and the White House. Despite GOP talk of spending discipline, it is projected to add $1.46 trillion to the nation’s $20 trillion debt over a decade. GOP lawmakers say they’d expect a future Congress to continue the tax cuts so they won’t expire. If achieved, that would drive up deficits even further.

Democrats, who were excluded from the closed-door drafting sessions, have kept up a litany of criticism that the legislation favors big corporations and the wealthy, snubbing the middle class. Though several Democratic lawmakers took part in the House-Senate conference that blended the two bills, none signed the final bill.

The bill would bring average initial tax cuts for Americans across all income lines, but by 2027, it would boost average levies for everyone earning up to $75,000, which includes most taxpayers, Congress’ nonpartisan tax analysts estimated Monday.

But by 2023, people making under $30,000 would see tax increases, and those earning more would see their tax cuts get smaller.

Rushing toward a vote and political triumph, Republican leaders brushed off the less-than-rosy projections. “That’s just cherry-picking the numbers,” Rep. Kevin Brady, R-Texas, head of the tax-writing House Ways and Means Committee, told reporters Monday. Looking ahead, he said, enthusiasm is growing for the tax bill and changes it will bring. “People are excited about a stronger economy and bigger paychecks,” Brady said.

The disgruntled Republican lawmakers from high-tax New York, New Jersey and California receded into the background as the tax train rolled. Twelve of them voted against the House tax bill last month, which passed 227-205. They were protesting its new $10,000 cap on the deduction that millions use in connection with state and local income, property, and sales taxes. The cap remains in the final bill.

The deduction is especially vital to residents of high-tax states.

Several defectors reaffirmed their “No” votes for the final bill on Tuesday. Rep. Peter King conveyed what people in his Long Island, New York district were telling him about the tax bill: “Nothing good, especially from Republicans. … It’s certainly unpopular in my district,” he said.