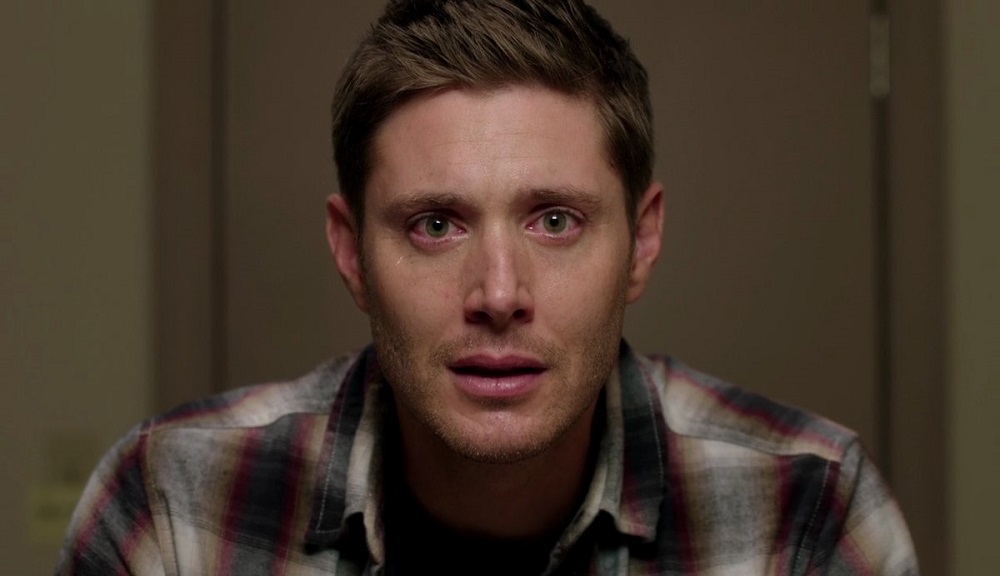 Regarding Dean has to be one of my favorite Supernatural episodes this season – it shows, distinctly, what great actors we have in Jared Padalecki and Jensen Ackles. Of course, Jensen gets the lion’s share of the scenes in this episode (it is called Regarding Dean, after all), but Jared’s role definitely doesn’t get lost – his skills are too great for that to happen.

My first impression of Gideon Loughlin (played by Justin Turnbull) was that he was the victim of some unknown monster; I’m sure that wasn’t an uncommon thought. This scene was one of the few this episode where we see classic Dean – a confident Dean that knows what he’s doing. One of the things I noticed that was done with wardrobe was the state of Dean’s jacket – when he’s chasing Gideon, it’s the Dean we know and love – clean but still a bit rough around the edges. When it comes to the next scene, with that absolutely adorable bunny, Dean’s jacket – and Dean himself – is definitely more rough than not. 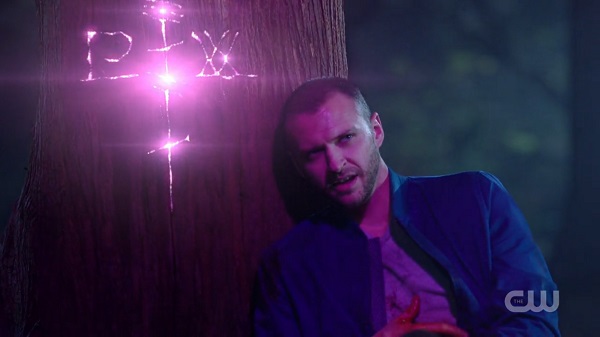 I’m about 99% positive that the restaurant location used for the breakfast diner is an IHOP (if anyone knows for sure, I’d be interested in confirming this). I’ve been to many in Vancouver, and they all have a certain … look. This scene has one of my favorite lines in this episode – after Elka (played by the lovely Lindsay Winch) slaps him – “Yup, epic night.”

The two trot off to the morgue to investigate their case – in which an accountant suffocates on a pile of money — to find out that with a hex bag involved, it’s indeed one of “their kind” of cases. So far Sam has thought that Dean was still recovering from an all-night bender, and it isn’t until Dean can’t figure out how to reverse Baby – much less remember which key to use – that he gets the inkling that something just isn’t quite right. (Makes you wonder how many times Sam and Dean have been in this situation before. Probably a lot.)

Both Jared and Jensen’s acting in this scene, the one in Baby, are totally spot on. At the beginning, Sam’s just laughing it off … but when Dean forgets his name (only for a second, but still) it’s obviously become a serious matter.

Sam realizes that he needs some assistance, and – inadvertently — ends up calling in for recruitments, in the nature of our favorite red-headed witch – Rowena. Although it’s a small scene, I quite enjoyed the one of Rowena playing poker. It gives us an insight into what she does when she’s not casting spells – although, her magic still comes into play when she turns her cards into a set of aces. Quite a good trick, that.

What I love about this episode is that it could so easily become strictly serious – however, there are many lighthearted moments (Dory, anyone?) that just made me giggle. Also; I wonder how long it took Jared to write all those sticky notes?

After talking to Rowena, and finding out the only way to get Dean’s memory back is to kill the witch, Sam and Dean set out to retrace Dean’s steps, and return to the accountant’s office. Kudos to the crew for the fast forward through the door to the accountant’s office – that was very well done. I also learned something about our Dean – who knew the guy liked cigars?

Dean apparently went for burgers after the accountant’s office (surprise, surprise) and continuing to retrace Dean’s steps, they end up at a bar where we again see Elka. The look on Dean’s face when he forgets how to explain he and Sam are FBI agents was picture perfect. And Sam rolling his eyes when Elka says Dean was amazing? Priceless! 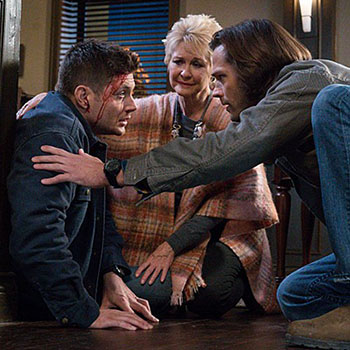 There are many good guest star roles in this episode – and Elka’s is one of them. Lindsay’s tone of voice and facial expression when she talks about taking advantage of Dean (and following which, Dean’s reaction) was hilarious … and I have to wonder if “Now salsa you mittens!” was Jensen actually trying to read his own lips, or if that was scripted. Either way – kudos.

Sam’s “Now that’s comedy” is another favorite line of mine – poor Dean, not being able to remember his time with Elka …. They find the video footage from the bar the night before, and of course, Dean can’t remember a thing about what’s on the screen …

Now. As a fangirl, I have to say I love fourth wall breaks – and “Watching myself on Netflix” gets me each of the three times I watched this episode. I love it when the show gives us viewers a wink and a nod … it’s great to be validated!

Back to Sam and Dean. They’ve found out who the witch is, and set out in the woods to continue retracing Dean’s steps – after Sam gives Dean “the talk” – yes Dean, there are monsters. The look that comes over Sam’s face when he realizes that he is giving Dean the same talk that they’ve given to uncountable civilians is … well, indescribable.  It’s almost in disbelief, like he can’t believe it’s happening.

The boys traipse through the woods (another one of my favorite lines occurs here – “Our best friend’s an angel. Whaaaaa?”) to find Gideon dead – there goes the easy way to fix Dean – and some Celtic runes on the tree (anyone else find Sam’s knowledge on esoteric things amazing?).

This next scene – back in the motel room – was an emotional roller coaster. I went from giggling at Dean’s comment on Rowena’s bouncy hair, and her “Do we have to fix him?” to utter sadness when Rowena says that Dean’s going to die … and then back to laughing again when Dean says, “Sucks for that guy!” 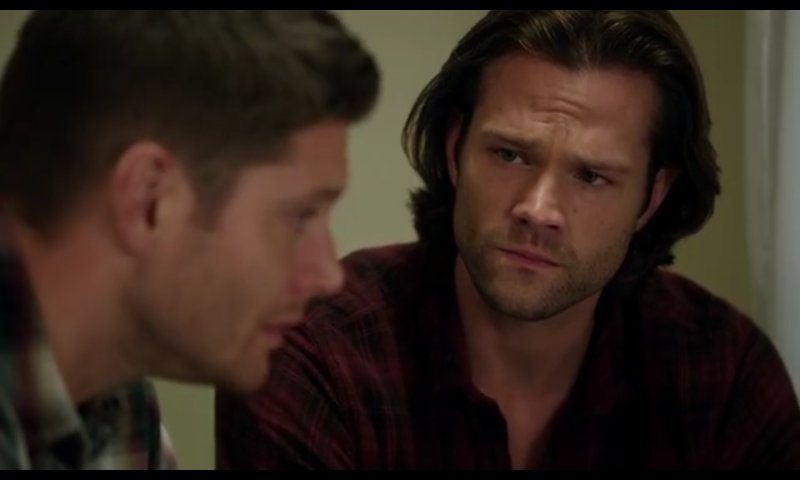 During this exchange, and the next one in the bathroom, Jared’s acting is perfection. His look of loss when Rowena says that Dean’s going to die, and after telling Dean his life story – him staying strong for his older brother, and still trying to look on the bright side of things and saying, “We’ll figure it out.” It breaks my heart.

This episode review would not be complete with a comment on Jensen’s acting in that bathroom scene. Speechless. That’s what it left me – looking into the camera/mirror and strictly with facial expressions alone conveying a complete and utter loss of memory. Wow. I love this show – and I love our boys.

Back in the motel room, Rowena and Sam are discussing what to do next. This line? It was so epically Supernatural … about our brothers, about the family …

“I’ve seen my brother die. But watching him become not him … this might actually be worse.”

That’s some heavy stuff. The unshed tears in Sam’s eyes – and the frustration when Rowena mentions getting the spellbook … that’s damn good acting.

Sam sets off to get the spellbook from the Loughlin siblings, and Rowena’s left back at the motel room babysitting Dean. Literally – Dean’s like a five-year-old, getting into everything until Rowena gives him a voodoo doll and some pins to play with. (Of course, she carries around voodoo dolls. This is Rowena we’re talking about.)

Rowena’s role in this entire episode definitely gives us some idea of what she’s thinking – she tells Dean about meeting the Loughlin’s back when she came to the country and being thrown out by them. She talks about power, and how if God and his sister can’t be happy, what hope is there for her? It’ll be interesting to see where that storyline goes …

Meanwhile, Sam has found the Loughlin house – and I have to take a second to say I hope this library is real because the reader in me is absolutely lusting after it. I want that library! Anyway, Sam confronts Boyd and Catriona and ends up being tied to a chair. Again. What is with Sam and chairs in this season? Really?

Sam’s inner goodness – and willingness to see the goodness in everyone – comes to play in this scene. He’s tied to a chair, yet he still tries to appeal to Boyd’s better side (if he has one) … trying to convince Boyd that he doesn’t have to play by his sister’s rules. Of course, it would be no fun if Boyd agrees, so we find out that Boyd and Catriona are planning to switch Sam’s soul for their dead brother’s. Lovely.

We cut back to the Impala to see Dean waking up to yet another sticky note – one explaining that his brother has been kidnapped (Dean’s repeat of “stupid car” made me smile – even when he’s losing himself, he still knows Baby is definitely not stupid) and one saying “Stay.” (I do believe that is actually Ruth Connell’s writing. Very apropos.)

I have to mention that I absolutely adore Tirra Dent’s character (Catriona). The use of her sing-song when she has Rowena up against the wall? Perfect. And Rowena’s line – “Nothing heals old wounds like opening fresh ones” is so obviously Rowena. 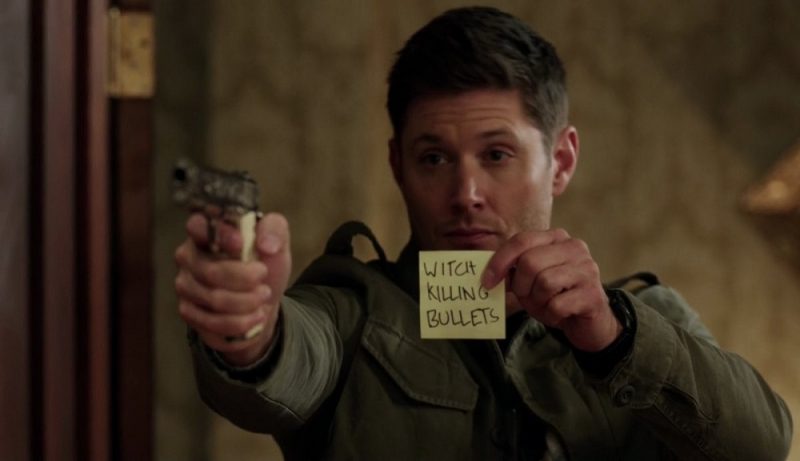 Back at the Impala, Dean has bypassed the “Stay” and has made his way to Baby’s trunk … where there’s a very large NO on the rocket launcher (loved that touch) and a “Witch killing bullets” and “This gun.” Rowena is still up against the wall, and Dean – who has lost his ability to speak — walks in pointing a gun at Catriona … his raised eyebrow after raising the “Witch killing bullets” sticky notes … well, it was wonderful. So Dean kills the witch(es) … Rowena casts the spell … and Dean’s back to normal, right?

“Who’s this hippy?” and its effect on Sam was funny in a very evil way. Not surprising though, considering the pranks that the boys play on each other.

It’s obvious – to me – how much Sam has grown. He says he was a little jealous – at first – of Dean because Dean couldn’t remember a thing about being a hunter. But I think he saw just how much of being a hunter is Dean – and himself, for that matter – and losing that would be like losing a part of himself. The scene ends with a grin to make Sam fans’ heart flutter, and a reminder to Dean that the Impala’s key is the shiny one.

To wrap this up – I truly believe Dean remembers everything from what happened during his memory loss. I might be wrong, but the fact that he says “Blank, mostly” to Rowena and the look on his face – and the montage intertwined with Dean riding the bull (thanks for that, by the way) … it just makes me think that everything is still there. What do you think?

This is my first Supernatural episode review – so my apologies if I miss anything. As with any family, I’m sure someone in the #SPNFamily will find something to say.